The Cheese Markets Continue To Lurch Back And Forth

The cheese markets continue to lurch back and forth, probing about for a fair value. After much volatility, the boundaries are becoming clearer. While CME spot Cheddar blocks were able to climb above $2.20 per pound a few weeks ago, they 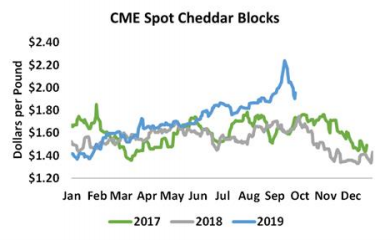 were clearly uneasy at that great height. Buyers are likely to back away once again if blocks climb north of $2.10 or barrels top $1.90. But as blocks slipped toward $1.90 and barrels approached $1.60 this week, offers dried up. Today, both markets bounced back with aplomb, suggesting that Thursday’s lows – with blocks at $1.9025 and barrels at $1.6125 – may be as far south as they are willing to venture for now. Cheddar blocks closed today at $1.955, down 9.5ȼ from last Friday, but up 5.25ȼ from yesterday’s nadir. Barrels staged an even more impressive comeback; they finished at $1.655, steady with last Friday. The spread between blocks and barrels narrowed, but at 30ȼ it remains historically wide, adding another layer of uncertainty to the already complex cheese markets. 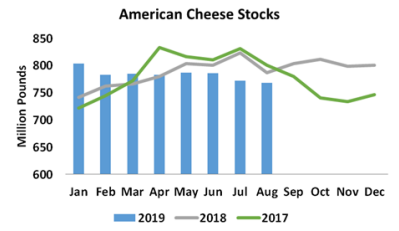 Cheese is in demand. But rising prices have boosted production and likely eased the shortage of fresh Cheddar that propelled the spot markets to their recent pinnacle. USDA estimates that there were 768 million pounds of American cheese, including Cheddar, in cold storage warehouses on August 31. That’s 3.6 million pounds less than at the end of July; American cheese stocks are 2.4% smaller than they were the year before. However, the draw down was much smaller than in a typical August. Stockpiles of other cheese varieties climbed. The month-to-month increase in total cheese stocks was small, at 705,000 pounds. But it was an increase nonetheless, and cheese supplies typically shrink in August. Cheese inventories totaled 1.36 billion pounds, up 0.2% from August 2018. Robust demand for cheese in the spring and summer has kept inventories in check this year. Cheese stocks fell below year-ago levels in June and July, and despite the atypical increase in August, cheese inventories have grown just 18.3 million pounds so far in 2019, the smallest year-to-date stock build since 2011. 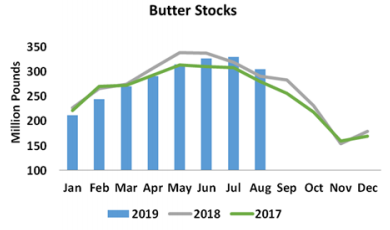 Butter inventories have finally peaked. In most years, butter stocks grow through May or June and then begin to wane. But this year, the butter stockpile burgeoned even in July. Inventories declined at the typical pace in August, falling 24.5 million pounds to 305.1 million pounds. There is 4.9% more butter in cold storage than there was a year ago. Butter inventories are ample to answer demand in the holiday baking season, cream is plentiful, and foreign butter and butterfat products are inexpensive. Butter values have moved sharply lower in recent months. CME spot butter fell nearly 10% from mid-July to mid-September. But that is far enough, for now. Spot butter bounced back this week. It settled at $2.1475, up 3.25ȼ from last Friday.

After weeks of quiet strength, the whey market is once again under pressure. CME spot whey finished at a disappointing 34.75ȼ today, down a nickel this week. Industry contacts tell USDA’s Dairy Market News, “While contracted sales are enough to keep inventories comfortable, some say whey stocks are building. The market pressures caused by the African swine fever and trade issues… loom over the market like a dark cloud.” China’s Ministry of Agriculture touts a slowdown in the rate of new cases of African swine fever, which has devastated the world’s largest hog herd. Amidst sky-high pork prices, some producers are surely looking to boost production. They are investing in piglet health, which would likely boost whey purchases per head. Indeed, Chinese whey imports were just shy of 100 million pounds in August, the highest volume since January and just 3.6% less than in August 2018. However, there are still reasons to be concerned about global demand for feed whey. The Chinese pig herd is considerably smaller than it was a year ago, and the disease is spreading quickly through South Korea, Vietnam, and the rest of Southeast Asia. 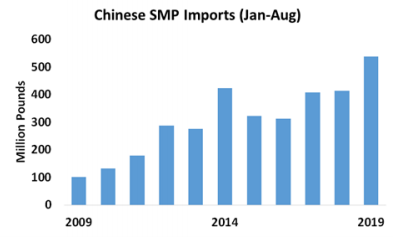 China continues to import huge volumes of skim milk powder (SMP). Last month China imported 68.3 million pounds of SMP, the highest-ever volume for August and 38.4% more than the year before. China’s year-to-date SMP imports are also record high. They are an astounding 27% higher than the massive volumes shipped in January through August 2014 and 30% higher than last year.

China’s voracious appetite for imported milk powder has trimmed global stockpiles. Dairy Market News warns that in Europe, “Export demand is strong and persistent… Unless SMP manufacturers are able to increase output, it seems unlikely that all potential buyers seeking late 2019 delivery can be accommodated.” In the U.S. high cheese prices and tighter milk markets are further reducing milk powder stocks, as cheese makers top up vats with skim milk solids. Buyers who balked when nonfat dry milk (NDM) reached $1.05 are coming back, checkbook in hand despite even higher prices. CME spot NDM just keeps climbing. It closed today at $1.11, up 2.5ȼ from last Friday and the highest value since March 2015. 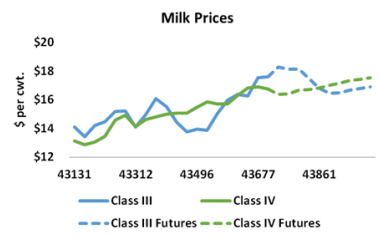 Dragged down by the cheese market, Class III futures settled in the red. October was hardest hit, falling 51ȼ to $18.15 per cwt. Most deferred contracts lost between 10 and 20ȼ. Although a retreat is disappointing for dairy producers, Class III prices are still much higher than they’ve been in years. September through November are better than $18. Class IV futures were mixed. Nearby contracts were generally a nickel higher than last Friday, while 2020 contracts were steady to a nickel lower.

It was a relatively quiet week in the grain markets, and prices went nowhere at all. December corn settled at $3.715 per bushel, up less than a penny from last Friday. November soybeans closed at $8.83, up 0.25ȼ. Harvest is underway in the southern states, but in the Corn Belt most combines are still parked in the shed. Cool temperatures and a wet forecast suggest that this year’s harvest may be an exercise in patience. Until the trade can get a better handle on yields, the markets will likely continue to consolidate. 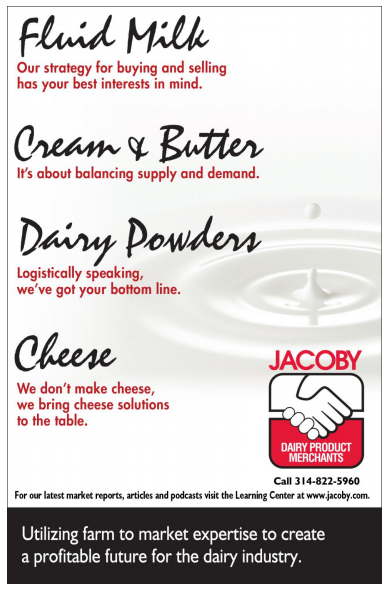