CME spot Cheddar blocks just keep marching down the field, with the relentless energy of running back Ezekiel Elliot.Barrels are more reminiscent of Barry Sanders, feinting this way and that, losing yards and then gaining them back with a flourish.Both markets rushed higher this week, but blocks were the standout. They settled at $1.9975 per 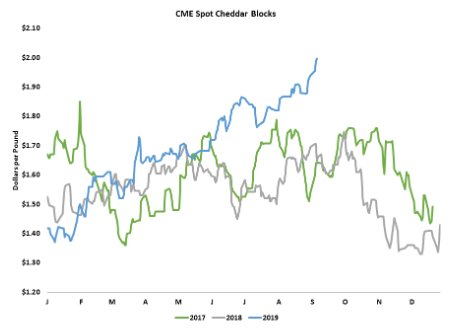 pound, just shy of the $2 mark and 6.75ȼ higher than last Friday. Such gains are especially impressive at these already lofty values. Industry insiders had previously told USDA’s Dairy Market News that prices north of $1.80 “would hinder buying,” as they have in the past. But, for now at least, blocks cannot be stopped. They stand at the highest price since November 2014. Barrels inched up 0.5ȼ this week to $1.7425. CME spot whey powder also gained a half-cent and reached 39.5ȼ.

Football season has arrived, schools are back in session, and cheese demand is excellent.Output is not keeping pace. Processors made 1.1 billion pounds of cheese in July, up just 0.5% from July 2018.Tighter 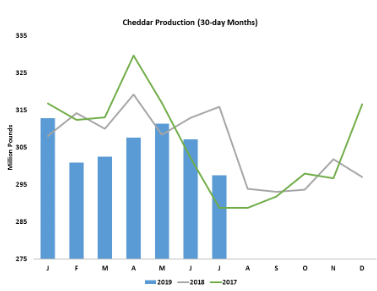 milk supplies in the Midwest and a shift toward Italian cheese production in California and Idaho reduced national Cheddar output to just 307.4 million pounds, down 5.5% year over year.That has helped to fuel the spot market, but traders remain concerned that fresh cheese will become more plentiful this fall. September Class III futures jumped 33ȼ this week to nearly $18 per cwt.,but most other contracts settled in the red. 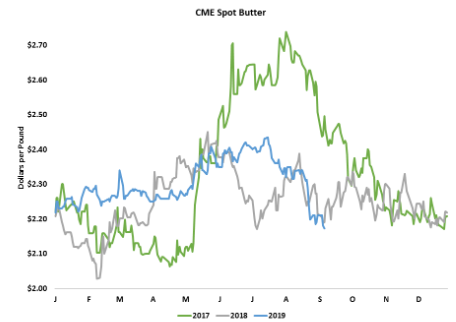 Cheap imported fat boosted U.S. butter output in July to 142.7 million pounds, 6% more than in July 2018.With plentiful stocks, rising production, and abundant imports, the butter market is on its heels.

The milk powder market is on firmer footing. Spot nonfat dry milk (NDM) climbed 0.75ȼ this week to $1.0475, its highest price since June.At the GDT, skim milk powder (SMP) ralled 0.7% to the equivalent of NDM at $1.21 per pound. Milk powder makers dried a lot of NDM–and comparatively little SMP –in July, but they kept it moving. Combined production of NDM and SMP totaled 205.6 million pounds, up 4% from July 2018. But manufacturers’ stocks of NDM climbed just 2.3 million pounds from June to July. At 291.2 million pounds, inventories were 8.3% lower than the prior year. 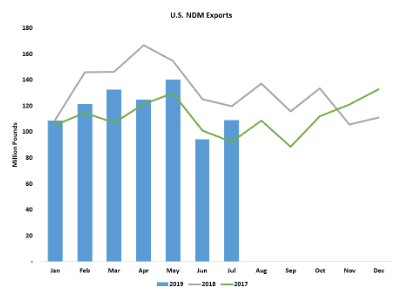 U.S. NDM/SMP exports in July fell 8.9% short of year-ago volumes despite higher shipments to Mexico. Weak demand from Asia reduced shipments of all varieties of dairy products in July. The U.S.sent 10.9% less cream, 38.9% less butter and milk fat,and 28.2% less dry whey abroad than it did in July 2018.U.S. cheese and curd exports topped the prior year by 0.3%, but the modest gain was the result of lower shipments to Mexico in July 2018, when higher tariffs began to take effect, rather than an indication of strengthening foreign demand for U.S. cheese. Shipments to South Korea fell 39.2% from a year ago, while exports to Japan dropped 16.4%. South Korea and Japan are America’s second and third largest cheese foreign markets.Comparatively high U.S. dairy product values, a strong currency, and punitive tariffs have created major headwinds for dairy exports. An economic slowdown in southeast Asia is an unwelcome development in an already tempestuous export environment. 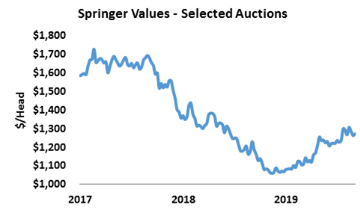 diminished export prospects in the cheese and milk powder markets.U.S. milk output seems likely to hold near year-ago levels, which would continue to under gird milk prices. Slaughter volumes remain high, suggesting that the dairy herd is still shrinking. Springer values have perked up. While this signals that some producers are looking to keep their barns full, it has also ushered in a new wave of dairy dispersals. Some dairy producers have weathered the downturn but have soured on the industry.Now that their facilities and livestock will command more than fire sale prices, they are looking to sell. A big boom in U.S. milk production is unlikely in the near term.

The feed markets fell. December corn futures settled today at a life-of-contract low of $3.555 per bushel, down 14.25ȼ from last Friday. Finishing at $8.5775, November soybeans lost 11.25ȼ.Crop analysts are slowly raising their assessment of the national corn and soybean yields. There are no sub-freezing temperatures in the forecast, easing concerns that a killing frost will damage the stunted crops.Still, it’s been a very unusual growing season, so the market will not feel confident in harvest prospects until the combines are rolling.Stockpiles are expected to remain ample despite some areas with very poor crops, as export volumes have disappointed, leaving more feed for U.S. end users.