If Chinese food companies can import more whey protein, cheese, milk powder and other dairy products from the United States they lessen their reliance on China’s dominant dairy supplier, New Zealand, while increasing food security for a population of 1.4 billion. 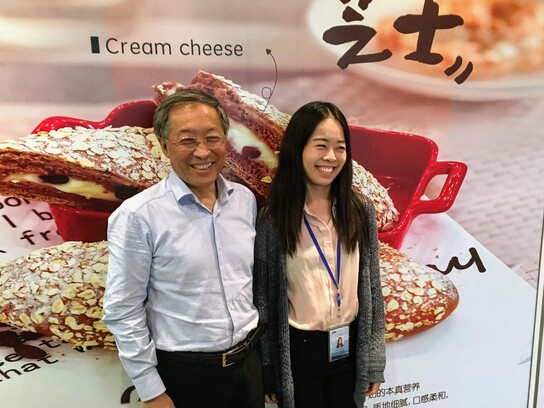 U.S. dairy products are assessed tariffs as high as 45%. This tax on imported goods, which varies from product to product, is at least 25% higher than it is for goods from other countries. This reduces the ability of U.S. dairy companies to compete and Chinese companies to manage their risk.

“We do not want to be monopolized by New Zealand,” said Liu.

As the global economy awaits the results of high-level, high-anxiety trade talks between the United States and China this week, Liu’s business decisions illustrate the negative dynamic tariffs can create, creating lose-lose scenarios for both the U.S. dairy industry and Chinese food companies.

Tariffs can undercut relationships the U.S. dairy industry has been building for years on behalf of its member companies. If tariffs are lifted through trade talks, the potential still exists for win-win partnerships benefitting China, U.S. dairy farmers and a U.S. dairy industry that supports nearly 3 million U.S. jobs.

“If the price is competitive and U.S. suppliers meet our specifications, we are very willing to choose the United States,” explained Liu at his Shanghai office. “We want to diversify our investments. We want to reduce our risks.”

China has been on a dairy spending spree this year with imports growing by 13% in the first quarter compared to the same period a year ago, according to data reported in Global Trade Atlas. But the United States has been left out of the China expansion. Since the first new tariffs went into effect in July 2018, U.S. dairy volume to China has fallen 43%. 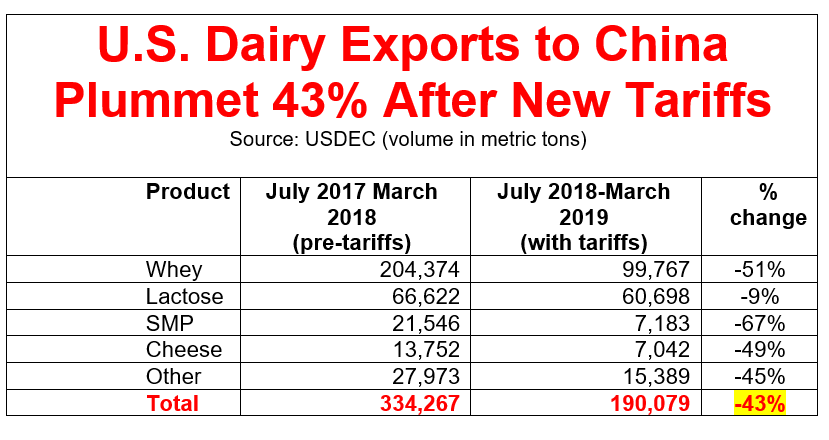 Looking ahead, lost sales in China are predicted to cost U.S. dairy farmers $12.2 billion by 2023 if the current retaliatory tariffs remain in place, according to a study commissioned last year by USDEC and conducted by Informa Agribusiness Consulting.

President Trump said on Twitter Sunday that he will increase tariffs on China this week. According to a notice published in the Federal Register on Thursday, tariffs on $200 billion worth of Chinese imports will go from 10% to 25%, effective Friday.

If China retaliates with tariffs higher than their current level, the potential long-term damage to one of the U.S. dairy industry’s most important export market increases.

China is not dairy self-sufficient and needs the United States and other countries to feed a growing population that can’t get enough dairy. 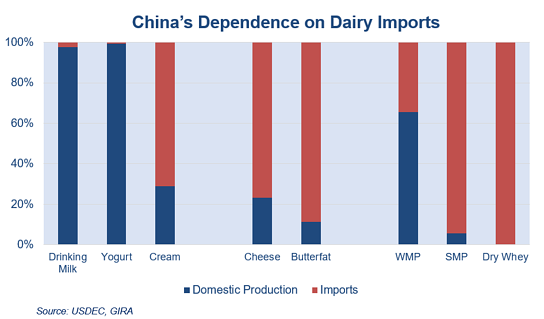 U.S. Dairy Export Council Executive Vice President Marc Beck made this point  when he spoke last month at an annual conference in Beijing held by the China Chamber of Commerce for Import and Export of Foodstuffs, Native Produce and Animal (CFNA).

“China is facing a mismatch between its resources and the market,” Beck told the CFNA, which has nearly 7,000 member companies devoted to agriculture, including 1,500 in the dairy sector alone. 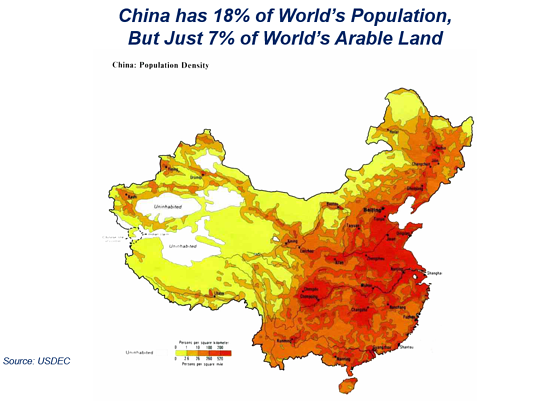 China has 18% of the world’s population, but just 7% of the globe’s arable land. This creates significant land and water constraints. Water scarcity is an issue. As a result, China must rely on imports to meet its food needs, including dairy.

Beck told CFNA that China’s dependence on dairy imports is projected to increase from about 32% today to nearly 35% by 2023.

“We provide food security and nutritional benefits to millions of consumers in China and around the world,” Beck told Chinese agricultural leaders. 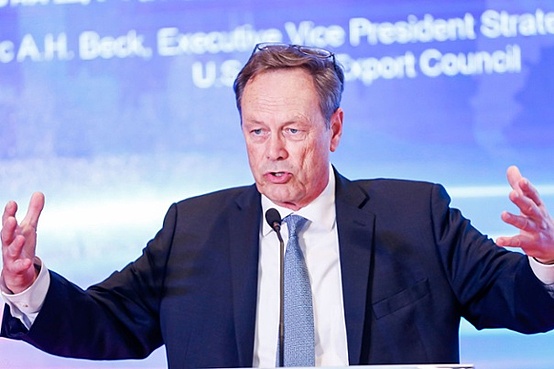 “Whether our products end up as ingredients in child nutrition formulas manufactured by Chinese companies, or in new emerging products that address the unique nutritional needs of China’s growing senior population, we are aware and proud of the fact that we are not just selling stuff.”

Chinese food executive: ‘We don’t want to be monopolized’

New Zealand is the dominant dairy supplier to China and that makes Jian Lu of Want Want Group, a bustling Chinese food and beverage conglomerate,  uneasy. Lu is the Vice Managing Director of Want Want Group, which operates 34 production bases and 131 plants in China.

Lu said he imports 90% of the milk powder he needs for a wide range of food products but can’t buy from the United States until U.S companies can again compete on price. 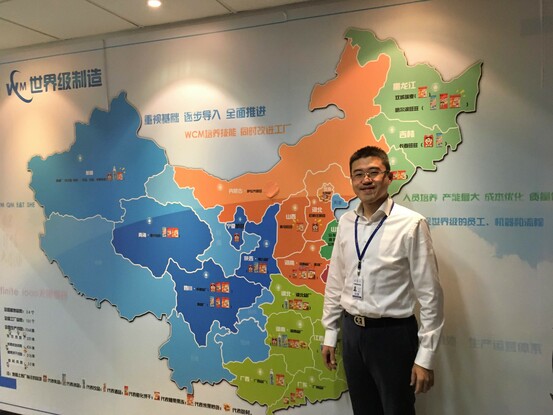 “We don’t want to be monopolized,” said Lu, sitting in his office at corporate headquarters in Shanghai. “We want to reduce that risk. Years ago, we started to look for other suppliers beyond New Zealand. We knew we needed another source in the Northern Hemisphere.”

Lu said he was “very grateful” for information the U.S. Dairy Export Council provided, making the case that the United States’ abundance of milk and China’s need for much more is a win-win proposition.

But the tariffs are forcing Want Want to look elsewhere, most likely the European Union, to mitigate its risk. He said once Want Want finds that secondary supplier it will be difficult, though not impossible, for other countries. In other words, the window of opportunity is now. The window may be closed later. 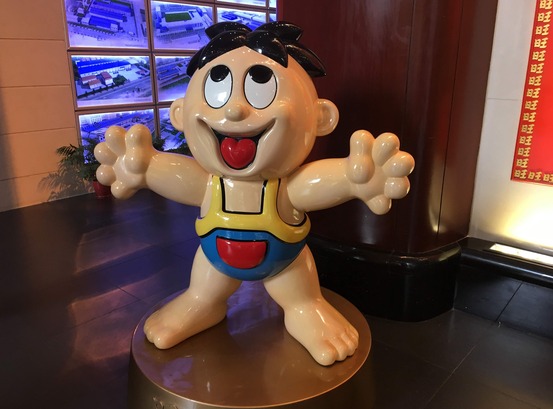 “We need large volumes of milk powder,” Lu explained. “We need to guarantee we have a reliable and consistent source for that milk powder. We need WMP but we also need SMP. Working together we can broaden our relationship beyond buyer and seller to develop products together.”

As the largest single-country producer of whey proteins, cheese, NDM/SMP and lactose, and with a large and growing milk shed, the United States is well-positioned to meet China’s growing dairy demand while reducing its risk on a dominant foreign supplier—if the U.S. can compete on price.

“China needs supply chain diversification and security. I’m here to tell you that the U.S. can provide all that,” Beck said in Beijing. “The United States accounts for about 18% of world trade—we are a significant dairy supplier. We can be an important part of your supply chain. We are eager to collaborate.”

Whether the U.S. dairy industry can form collaborative partnerships like this in China hinges on trade policy between the two governments.

“U.S. dairy farmers and exporters cannot overstate how important it is for the U.S. and China trade talks to stay on course until an agreement can be reached,” said USDEC President and CEO Tom Vilsack.

Much is at stake, not only for the U.S. dairy industry but the nearly 3 million U.S. jobs it supports.

Exports are a key to a more prosperous dairy future. Consider:

China is the big prize.

If the high tariffs on U.S. dairy are lifted, U.S. suppliers can regain price competitiveness and market share. If the tariffs remain or escalate, U.S. dairy will struggle to compete on a tilted playing field in the world’s largest country.

The world needs U.S. dairy and we need the world to export more of our abundant milk, award-winning products and high-quality ingredients.  When we unveiled our “Next 5%” goal last year to increase U.S. Dairy [Read More …]

Dairy alternatives are on a rise as consumers are increasingly going dairy-free, particularly when it comes to fluid ‘milk’ used on things like cereal or in coffees. More recently, biotechnology has entered the arena, brewing [Read More …]