Structurally Sound, but in Need of Major Facelift 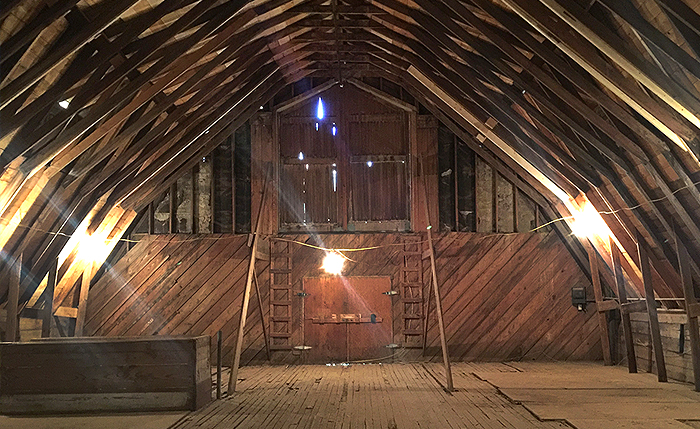 Built in 1926, Tech’s Dairy Barn is one of the four original buildings on what was then known as Texas Technological College. By 1931, Tech’s Dairy Manufactures Department was self-supporting, furnishing milk and ice cream to campus cafeterias and the Lubbock community. The college herd, comprised of cattle bought by or donated to the college, swelled beyond the barn’s capacity by 1935. As a solution, students were asked to remove their own cattle from the barn and the era of tuition payments through milk sales came to an end. The facility continued to serve as an educational site for students interested in the industry until it was abandoned in 1964, when dairy operations were moved. Campus planners razed the dairy manufacturing addition a year later to make way for new facilities and the historic barn sat quietly ignored.

In 2016, Lubbock County’s Historical Commission and the Student Government Association of Texas Tech unveiled a new Texas State Historical Marker in ceremonies. Built in an L-shaped configuration, the agricultural complex includes a free-standing grain silo to the west of the main wing. A description of the building from the register notes: The complex was built with interior milking and feeding facilities for 40 cows, plus calf stalls, feed mixing room, boiler room, attendant’s room and an office. A fire in January 1930 damaged the building, destroyed equipment and killed three cows, but the building was soon repaired and new milking equipment was installed. Some minor interior and exterior changes were made through years of milking operations before 1966, when the Dairy Manufacturing Department vacated the building.

A 1976 report and slide presentation titled “Restoration: Texas Tech Dairy Barn,” recommended the return of the dairy barn to its 1946 condition in order to create a dairy museum or perhaps a theater for the German, French and Spanish departments. During the late ’70s, architecture professor Will Robinson began attempts to register the dairy barn as a historic place. His interests in the National Register of Historic Places were strengthened when the barn was deemed unsafe and structurally

unsound by the Coordinating Board for the Texas College and University System in 1984. The report called for the building to be demolished or abandoned. The Texas Antiquities Committee designated the barn as a historical landmark in 1985, but renovation estimates soared to $500,000.

In 1989, Tech’s student senate took action, creating a committee to study the preservation of the facility and work towards having it listed in the National Register of Historic Places. The “Save the Barn” campaign, a student and alumni effort held from 1990-92, raised $64,000 to weatherize the barn. The project sealed the facility from the harsh West Texas weather elements by rebuilding its roof, repairing the windows, doors and walls and repainting both the barn and the silo. Preservationists ultimately prevailed and the dairy barn and silo were officially dedicated to the NRHP in 1992. But the barn would not rest peacefully for long. University master planners drew in a pedestrian mall at its current location in 1997. Talks of renovation began again but the barn and silo continued to sit unchanged and today stand as a quiet and curious reminder of Texas Tech’s agricultural roots.

Competition in the Dairy Barn

Competition among dairy cattle for resources such as, feed, water, and resting space, may cause stress, production loses and health issues. I’m a huge College Sports fan, and while I always want a Penn State [Read More …]

Competition in the Dairy Barn

Competition among dairy cattle for resources such as, feed, water, and resting space, may cause stress, production loses and health issues. I’m a huge College Sports fan, and while I always want a Penn State [Read More …]

The Amarillo Economic Development Corporation has pledged up to $69 million toward completion of the project On Saturday, Texas Governor Greg Abbott authorized a budget approved by the Texas Legislature that will allocate $17.35 million [Read More …]