CME spot Cheddar blocks soared to the largest single-session increase on record. Barrels followed reluctantly and the block-barrel spread gaped. The market is on tenterhooks to see whether blocks will move lower or barrels higher to close the gap. 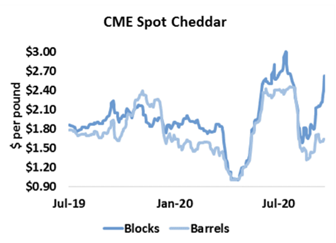 The block market is looking feisty again. Today, CME spot Cheddar blocks soared 22.75ȼ, the largest single-session increase on record. That lifted blocks to $2.6275 per pound, within shouting distance of the summer highs and 46.25ȼ above last Friday’s close. Barrels followed reluctantly, adding 4ȼ this week and reaching $1.635. The blockbarrel spread gaped to a historic 99.25ȼ, shattering the pre-2020 record of 43.25ȼ. Such a yawning chasm is unsustainable. The market is on tenterhooks to see whether blocks will move lower or barrels higher to close the gap.

Soaring block prices make it clear that fresh Cheddar is inadequate to meet demand. Foodservice sales are improving, although they remain well short of year-ago levels. Retailers continue to move cheese at a good clip. Cheesemakers are also filling orders for government donations. That business will dry up soon, but for now it is eating up product. When spot Cheddar blocks were around $1.60 last month, cheesemakers likely pushed Cheddar into aging programs, further reducing the supply of cheese that is less than 30 days old and eligible for delivery in Chicago.

Rapidly rising block values pushed cheese and Class III futures sharply higher this week. October Class III advanced 38ȼ to $19.59 per cwt, the contract’s highest-ever closing price. November Class III added more than a dollar, and December was not far behind, up nearly 80ȼ from last Friday. Double-digit gains carried into early 2021. Lofty Class III values in October will result in another punitive producer price differential for most dairy producers after a respite in August and September. 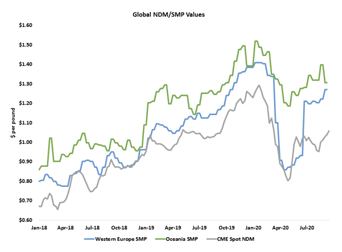 The Class IV markets also strengthened. Thanks in part to a strong performance at the Global Dairy Trade (GDT) auction and rising skim milk powder (SMP) prices around the globe, CME spot nonfat dry milk (NDM) climbed 3ȼ this week to a six-month high at $1.07. Adjusting for protein, GDT SMP averaged $1.40, up a strong 8.4% from the previous auction. American milk powder is by far the cheapest in the world. After months of buying largely hand-tomouth, Mexican buyers have some catching up to do and trading across the border is increasingly brisk. Domestic users are also stocking up. USDA’s Dairy Market News reports “lively” demand from cheesemakers looking to fortify their vats.

CME spot butter pushed decisively through the $1.50 ceiling this week and closed today at $1.5975, up 11.75ȼ from last Friday. Butter demand is increasing seasonally, and butter has the most to gain as restaurants adapt and consumers find ways to return to normal.

With help from both butter and powder, most Class IV futures contracts added about 40ȼ this week. However, values remain disappointing. Class IV contracts are still south of $15 through January and are not projected to reach $16 until July. 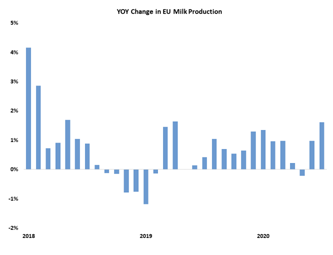 Sweltering temperatures strangled milk output in the U.S. Southwest, but dairy producers in the rest of the nation more than made up for it. Milk output reached 18.6 billion pounds in August, up 1.8% from a year ago. For the second consecutive Milk Production report, USDA revised the previous month’s milk output substantially higher. National 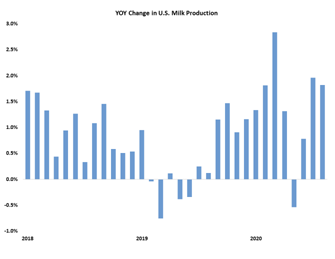 milk production in July was 2% greater than the prior year, rather than the 1.5% gain USDA had initially reported.

Despite record-breaking heat and unseasonable humidity in California, milk output in the nation’s top dairy state exceeded last year by 1.8%. Production fell 0.3% short in Wisconsin. Milk continues to gush in Idaho and Texas. 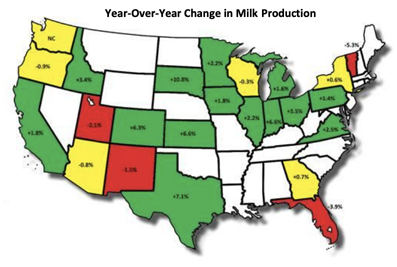 USDA boosted its estimate of the July milk-cow herd by 8,000 head and reported no change from July to August. At 9.36 million head, the dairy herd is 42,000 head larger than it was a year ago. Very low slaughter volumes point to continued growth in the dairy herd and in future milk flows.

On its face, the Milk Production report was bearish. But news that there was more milk than we bargained for two months ago and again last month loses its bite in the face of such a strong rally. Rather, it becomes evidence of dynamic demand. The market absorbed the excess and is apparently looking for more.

China has been buying American crops of all sorts in huge volumes, and they are buying soybeans with particular enthusiasm. The funds are buying too, adding further oomph to an already vigorous rally. Concerns about the impact of scant August rains on crop yields also provided fodder for the bulls. December corn futures settled today at a six-month high of $3.785 per bushel, a dime higher than last Friday. November soybeans climbed another 47.5ȼ this week to $10.435, a multi-year high. December soybean meal jumped nearly $20 to $342.10.

CAPITALIZE ON COTTONSEED PRICES TO MAXIMIZE YOUR RATION