Apparently, dairy market bulls are not essential workers. Like many of us, they spent March and much of April sheltering in place. But the bulls are back to work now with a renewed energy after all their idleness. Most of the dairy complex gained ground last week, and this week prices moved higher across the board. June, July, and August butter futures settled a nickel higher today, at their daily trading limit. Class III futures posted double-digit gains. The June contract climbed $1491 this week to $13.68 per cwt. 2020 Class IV futures gained more than a half dollar, on average. Despite the recovery, the next several milk checks promise to be agonizingly inadequate. 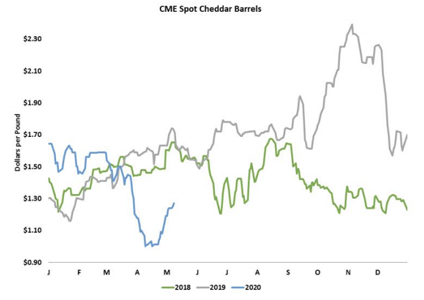 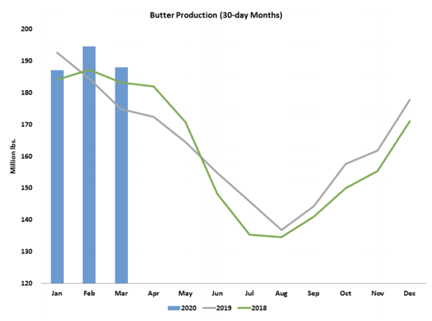 U.S. cheese output barely grew in March, likely because manufacturers were cautious about stepping up output as customers pared back orders due to restaurant closures. Total cheese output reached 1.12 billion pounds, up just 0.2% from March 2019. Cheddar production increased 1.1% but Mozzarella output slipped 0.4% year over year. Amidst a flood of inexpensive cream, butter output jumped 7.5% from the prior year to 188 million pounds. Cream got even cheaper in April, so there is likely a lot of butter in cold storage. Now that ice cream season has arrived, cream multiples are noticeably higher than they were last month. 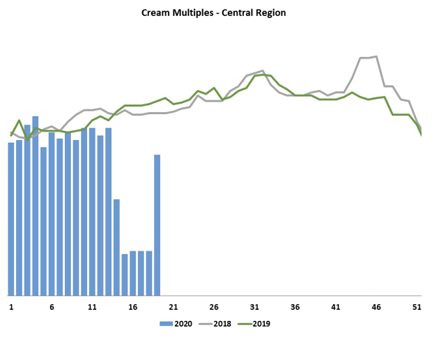 It feels like the worst may be over for milk prices. But these are far from happy times. The market is finding balance mostly because the industry has made painful production cuts. Overproduction penalties and $11 milk have gone a long way to discourage output. Despite a collapse in national cattle slaughter volumes, dairy producers are culling cows in staggering numbers. In four of the past five weeks (through April 25), dairy cow slaughter has reached 34-year highs. At this time last year the milk cow herd was in decline, largely due to aggressive culling. We are winnowing even faster now. Dairy cow slaughter topped year 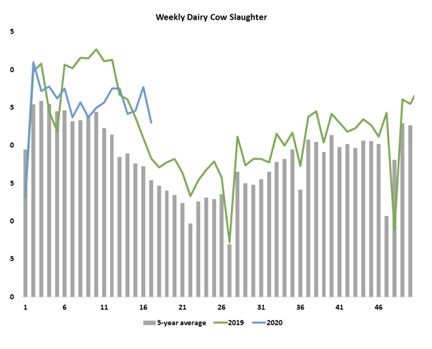 Demand is reportedly ticking up, as grocers restock and restaurants place new orders for the first time in a while. But consumers are still fearful, and dairy sales through foodservice may disappoint. USDA is joining the effort. Today the agency announced $1.2 billion in contracts for the new Farmers to Families Food Box Program, including $317 million for dairy products and $175 million for a combination box which will 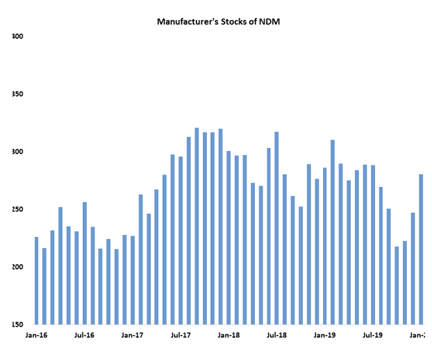 also include dairy. This initial round of donations is moving forward quickly, and the spending is more generous than previously anticipated.

There are likely plenty of families in need. The U.S. economy lost 20.5 million jobs in April and the unemployment rate soared to a record-high 14.7%. Meanwhile, the pandemic has hardly slowed. While the United States as a whole reports fewer new Covid-19 infections than it did a couple weeks ago, that’s almost entirely due to the fact that the crisis has abated in New York City. Excluding New York, new daily cases of Covid-19 in the U.S. are still on the rise. Researchers are racing to create a vaccine, but it likely won’t be widely available until next year.

In the meantime, we’re piling up dairy products. As of March 31, manufacturers’ stocks of NDM climbed to 349.2 million pounds, the highest total in USDA records dating back to 1930. While privately held stocks of U.S. NDM have never been this high, milk powder inventories were far higher in the 1990s, when the government held a milk powder stockpile. Still, the milestone is unwelcome. Milk powder inventories likely continued to grow in April, as driers ran at full speed and global commerce slowed. The European floor price could forestall U.S. milk NDM from dropping much lower, but rallies may be fleeting. Mexican buyers are mostly on the sidelines, and the peso is very weak. Slaughter volumes suggest that when we emerge from this crisis and demand recovers, there will be significantly less milk. But with inventories on the rise, it may be some time before we’re short of dairy.

After much back and forth, the feed markets barely budged. July beans rallied a penny to $8.505 per bushel. July corn climbed a fraction of a cent to $3.1925. More than half of the corn crop is in the ground, and farmers are seeding soybeans at a good clip. It’s cold in the Corn Belt this weekend, but next week looks warmer. Dry weather is taking the top off of Brazil’s second corn crop.

Dairy Month Got Off to a Rousing Start

The T.C. Jacoby Weekly Market Report Week Ending June 5, 2020 Dairy Month got off to a rousing start. The markets sprinted straight uphill on Monday. With amazing stamina and speed, they maintained their frantic [Read More …]