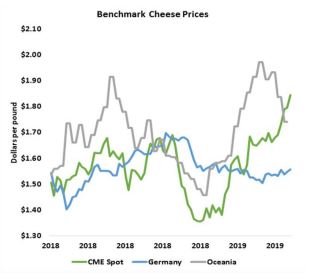 The bulls bellowed on LaSalle Street today, with shouts of “New highs!” CME spot Cheddar blocks climbed 3.25ȼ this week to $18.575 per pound. Barrels rallied 5.25ȼ to $1.79. Both blocks and barrels stand at their loftiest levels since November 2016. That’s 31 months, 947 days, or 648 trading sessions ago. That propelled Class III contracts to new highs despite a small setback in spot whey pricing. Third quarter Class III contracts vaulted more than 20ȼ this week.

There is no surplus of cheap milk in the traditional cheese states, which has likely slowed production of commodity Cheddar. And demand remains firm. Cheese merchants tell USDA’s Dairy Market News that exports are accelerating. An uptick in cheese orders from Mexico is not surprising now that the retaliatory tariffs have been lifted. But Asian buyers are also shopping for more U.S. cheese, which is remarkable given much cheaper product in Europe. It’s possible that European vendors don’t have enough cheese in inventory to satisfy foreign demand. If that’s the case, the bulls might take up residence in the dairy pits for a while. However, if cheese stocks in Europe are truly tightening, shouldn’t it be reflected in their pricing? Benchmark German cheese markets have barely budged all year. German butter values have fallen for eight straight weeks. 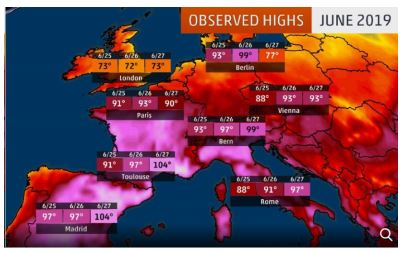 There is reason to suspect that European dairy product supplies will tighten, and that prices will rise accordingly. It is unbearably hot across the continent, with record-high temperatures in the triple digits. Milk output is surely suffering. Such heat is extremely rare in much of Europe, and dairy producers there have not invested in the types of cooling technologies that are standard in the warmer U.S. dairy regions.

The first summer heat wave is hitting parts of the U.S. Midwest as well, which will not help milk yields. Dairy slaughter remains high, which suggests that the dairy herd continues to contract. If summer weather reduces growth in milk production per cow, the U.S. will likely begin to feel the full impact from the pronounced decline in milk cow numbers. 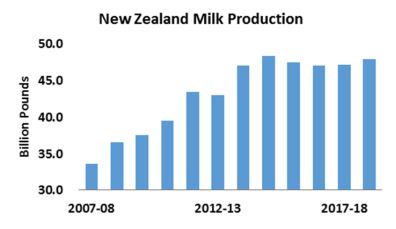 New Zealand wrapped up its dairy season last month. Milk solids output in May was 1.1% lower than in 2018. The 2018-19 season featured an early sprint, a good run in the middle, and a weak finish, as pastures dried up around the turn of the year. Milk solids collections were 2.4% higher than in the 2017-18 season. Perhaps the bigger story is that New Zealand’s milk output has fluctuated very little since 2014-15. Until 2014, the world had to contend with a lot of new milk out of Oceania year after year. That is not the case anymore. Dairy producers in New Zealand are no longer pushing to add a lot of cows. Growth now depends on improved production per cow. Given elevated feed prices and the rising cost of environmental compliance on the islands, a big shift away from the pasture system to more concentrated feeding is unlikely in the near term. 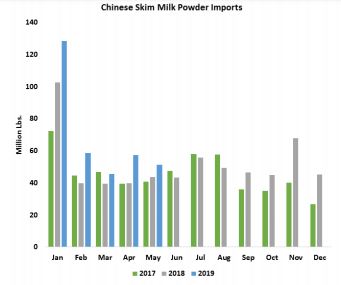 Slower growth in New Zealand milk collections and steep declines in Australia are likely to weigh on Oceania’s milk powder output. But demand has not slowed, particularly from China, New Zealand’s largest customer. In May, China imported 51.3 million pounds of SMP, the largest volume for that month on record. Chinese SMP imports are up 28.7% for the year to date, and they are 17.9% ahead of the previous record, set in 2014. China imported 1.2% more whole milk powder (WMP) last month than in May 2018, and year-to-date imports top year-ago levels by 30%. China once again imported big volumes of ultra-high temperature (UHT) milk in May, but imports of other dairy product categories did not impress. Chinese imports of dry whey were particularly puny. China’s hog herd has been decimated by African swine fever, and pig growers are not buying whey for piglet rations in the volumes they once did. U.S. sales are further hampered by punitive tariffs. U.S. whey exports to China dropped 73.4% from a year ago in May to the lowest level since August 2010. Lost demand from China has weighed heavily on U.S. whey pricing. The depressed whey market has been an anchor on Class III values, which would be even higher if whey prices were more buoyant. 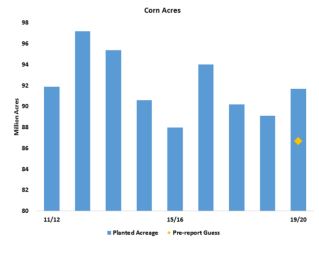 USDA walloped the corn market today. The agency estimated planted corn area at 91.7 million acres, up 3% from a year ago and well above analysts’ average estimate of 86.7 million acres. The grain trade had anticipated a big decline in corn area this year because millions of acres of prime farmland were completely inaccessible during the typical planting window. USDA surveyed farmers about their planting progress and intentions during the first two weeks of June. Soaring corn prices during the survey period likely prompted farmers to answer that they would make every effort to plant every acre. However, heavy rains pelted already saturated soils for most of the month. It’s extremely unlikely that farmers were able to seed as much ground as they hoped; USDA is likely to revise its planted acreage figure lower in the months to come. USDA did lower its estimate of soybean plantings considerably, to 80 million acres. That’s down 10% from a year ago and well behind the average guess of 84.4 million acres. Today’s Acreage report prompted a steep selloff in corn futures and a big jump in soybean values. September corn settled at $4.2475 per bushel, down 22.75ȼ this week. August soybeans closed at $9.045, down 4ȼ due to an early-week retreat.

An advisory committee to develop USDA’s Dietary Guidelines for 2020 – 2025 will be named in coming weeks by Secretary Perdue.  Dairy advocates urge that members be appointed who have proper scientific credentials so that dairy and [Read More …]