US dairy product and milk prices should see a little strength through November, but we’re likely looking at a setback to prices after that. Farm gate margins in the US haven’t been great in recent years, and it looks like 2019 might only be a little better than 2018. Farm gate margins in Europe and New Zealand have been better than in the US and expanding milk production in those countries should help to cap the upside to prices in 2019 unless disease or the weather negatively impacts their production.

The wildcard on production is New Zealand (as usual), and to a lesser extent, Australia. The major dairy regions in Australia have recently seen some adverse weather with some areas too wet and others too dry, but they could still pull-off about 1% growth for the season. At this point, Australia is a minor player on the world markets, accounting for less than 5% of global dairy exports in 2017 (the US accounted for 19%).

The production outlook for New Zealand is more positive, and they are 35% of global dairy trade. The cost of production in New Zealand is estimated a little below $6.00 NZD per kilogram of milk solids, or about $12.40 USD/cwt. The last forecast by Fonterra was for a $7.00 NZD payout to farmers, but prices have fallen since then and a more reasonable forecast would be in the $6.50-$6.75 range. So, NZ margins are looking positive and we would typically see milk production growth in the 3-5% range with positive margins. However, the NZ industry is attempting to eradicate mycoplasma bovis in the country and is culling about 150,000 cattle. Of that 150,000, something around 80,000 are milking cows which is about 1.5% of their herd. That likely keeps their production growth closer to 2% for the season assuming normal weather. The weather in July and early August was actually better than average and significantly better than last year, so the milk flows are starting the season strong and buyers have no fear of a shortage in New Zealand (yet).

Price action in the dairy markets during 2018 has been driven primarily by global demand. Back in March when we wrote a global dairy outlook for DairyBusiness we were arguing that the weakness that we saw in prices during late 2017 and early 2018 was primarily demand driven and our models were forecasting an improvement in demand during 2018. That improvement came earlier in the year than expected and pushed dairy prices up March through June. We’ve seen the market soften since then. Many people have blamed most or all of the decline in US dairy commodity prices during June and early July on the announced retaliatory tariffs on US dairy products by China and Mexico. But we would argue that most of the decline in prices was tied to a sharp slowdown in global import demand that hit mid-year.

The surge in demand in early 2018 was driven by importers rebuilding inventory at relatively cheap prices. As prices rose in the first half of the year, that price sensitive demand dropped off. We reset pricing in June/July, and that has likely brought some buyers back into the market which is helping to push prices a bit higher in August. When you combine a small bounce back in demand along with slowing global milk production in Q4 you can start to piece together a supportive argument for prices for the remainder of the year, or at least through November before domestic holiday demand drops off.

The demand outlook for calendar 2019 is still good, but in the words of the International Monetary Fund (IMF), the downside “risks to the outlook are mounting”. We use the IMF’s GDP forecasts to drive our global demand models, and economic growth has a big impact on demand and price forecast. The last update from the IMF was in July. They downgraded economic growth in developing countries but held steady or boosted the outlook for developing countries slightly. Their updated forecasts were made after the initial rounds of the tariff disputes between the US and key trading partners had already been announced. Since then the global financial headlines have mostly been negative. Headlines get focused on specific things in just a handful of countries though and it’s possible that economic growth across a broad swath of developing countries is continuing mostly undisturbed by recent issues. So we’re not too concerned about the demand outlook weakening yet, but it is a possibility.

While the global demand outlook generally remains good, one place of consistent weakness this year is China. Technically China hasn’t reported their import data since March. They stopped publishing the data after the trade battle went into full swing. But we can add up what all of the major dairy exporters say they are shipping to China and get a very good idea of what China is importing. That is called mirrored import data. Chinese mirrored imports are only up 1.6% through June, a dramatic slowdown from the 22% growth in calendar 2017. Chinese buyers appear to be pretty cautious this year in the face of slowing economic growth in the country, a weaker currency, and now higher tariffs placed on US dairy products. The fact that the production outlook for New Zealand is currently good isn’t helping to pull buyers off the sidelines either. We’re still plugging in 6.5% Chinese import growth for calendar 2018 and 9% growth for 2019. But if Chinese imports continue to run at just 1.6% growth, then the upside for prices for the remainder of 2018 and 2019 becomes very limited. 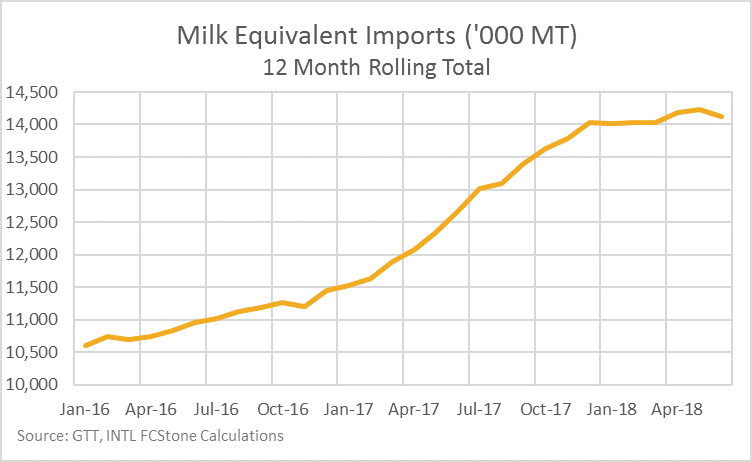 The higher tariffs that the US is facing into China and Mexico certainly aren’t helping US prices, but they also aren’t a huge deterrent to higher prices. The impact of the tariffs is really to the spread between the US and global prices. If our shipments to China and Mexico soften, how much cheaper do US prices have to be to take some market share and ship more product into countries like Japan, Algeria, and Southeast Asia? We’re thinking the tariffs probably widen the spread between the US and the world market by about 50 cents/cwt. of milk. If we see an outbreak of peace in the trade war we can expect a little better milk prices, but not a huge increase.

Milk production growth across the major exporters should be slowing during the second half of 2018 in response to weak margins early in the year. With a small bounce in global demand outside of China, and some improvement in Chinese imports, we should see some general support for dairy prices through November. But the higher milk prices will push margins higher and drive an expansion in milk production that will hit by the second quarter of 2019. Demand is expected to be good overall in 2019, which limits the downside for prices, but downside risks are mounting around demand. The biggest swing factor is Chinese imports. Without some improvement in Chinese imports, the upside for prices for the remainder of 2018 and 2019 is limited.

Editor’s Note: Nate is the Director of Dairy Market Insight at INTL FCStone Financial Inc. and has been applying his interest in large complicated systems and statistical analysis to the international and U.S. dairy markets since 2005. As a consultant, he has worked with clients at all levels of the dairy marketing chain from the farm level up to processors and packaged foods companies, food distributors and restaurants as well as connected industries like banks, private equity groups, government agencies, and industry associations. Through ongoing reports or one-off client specific projects, he helps them understand the short and long-term trends and the underlying relationships driving the market and what that means to their businesses. Nate may be contacted at phone: 952-852-2942  -  Nate.Donnay@intlfcstone.com.