The milk markets retreated once again this week. Class III and IV futures posted double-digit losses and nearby contracts plumbed new life-of-contract lows. The markets managed to perk up from mid-week lows, but values remain depressed, with May Class III and IV slumping to levels not seen since 2009. On Thursday May Class IV traded below $10/cwt., but it managed to rebound to a still inadequate $10.05. 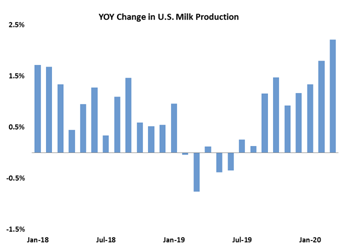 These milk prices will not pay the bills, and dairy producers are likely cutting milk production accordingly. In some regions, co-op penalties will accelerate contraction. These incentives were largely absent in March, when the spring flush arrived with a vengeance. Milk output climbed to a record 19.26 billion pounds, up 2.2% from March 2019. It was relatively easy to grow milk output from last year, when a harsh winter and shrinking cow herd translated into a significant contraction in U.S. milk output. The staggering output helps to explain why so much milk was dumped in late March and early April, as the industry struggled to adjust to the impacts of Covid-19. 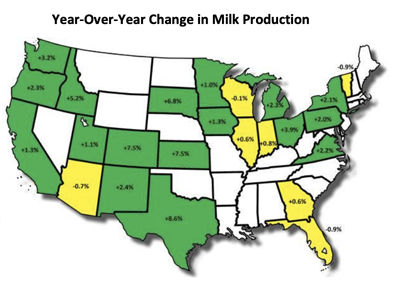 Milk production advanced in nearly every state, and the milk-cow herd grew as well. USDA revised upward its estimate of February’s dairy herd by 5,000 head, and reported another 5,000-cow increase in March. At 9.38 million head, the U.S. milk-cow herd stands at a 19- month high, up 47,000 head from March 2019. If slaughter facilities cannot process dairy cows in sufficient volumes, it’s possible that the dairy herd will continue to expand in the near-term. However, dairy producers are likely to cull cows aggressively when the opportunity arises. Indeed, dairy cow slaughter topped the record-high levels of last year in two of the past three weeks of available slaughter data. If dairy producers 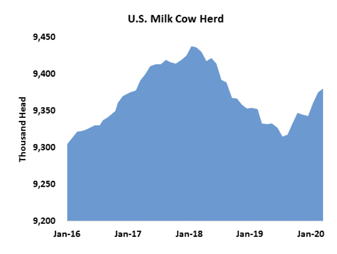 are forced to slow cull rates, they will likely step up other measures to cut costs and reduce milk output. Growth in April milk production is likely to be much more modest than it was in March.

The cheese and butter stockpiles were less burdensome than expected. There were 1.37 billion pounds of cheese in cold storage warehouses on March 31, 0.8% less than the year before. Inventories of American cheese fell 1.2% from March 2019 volumes. At 309.6 million pounds, butter stocks were 15% greater than they were a year ago, and the largest March 31 total 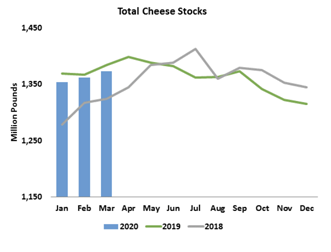 since 1993. Cheese and butter stocks grew in March, but the month-to-month increase was smaller than in a typical year. This is likely due to the fact that manufacturers responded urgently to keep grocery cases full. At the same time, the impact of the collapse of the foodservice industry on cheese and butter stocks lagged the declines in restaurant traffic. In the fog of uncertainty, restaurateurs likely didn’t cancel shipments for food they had ordered weeks in advance, which meant product kept moving out of warehouses through most of March even as consumers stayed home. The brunt of this lost demand will be reflected in dairy product inventories on April 30. Already, refrigerated storage space is becoming scarce. Nonetheless, the bullish Cold Storage report helped to give the markets a boost on Thursday and Friday. 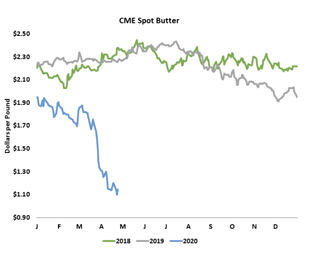 It’s likely that many state and local governments will ease stay-at-home orders in May, which suggests that restaurant demand could improve from its current rock-bottom level. A Civic Science poll from early April finds that Americans list “going out to bars and restaurants” as the activity they miss second-most, just behind gathering with friends, but well ahead of shopping, self-care, and sports. We are feeling cooped up and tired of cooking. But we’re clearly not ready to risk infection just to avoid doing the dishes. A CBS News

Poll found that only 13% of Americans would definitely return to public places if stay-at-home orders were lifted. Nearly half said they plan to avoid public places until the outbreak is over, while another 39% would assess the prevalence of the virus before they consider venturing out. Restaurants might improve sales as they continue to adapt for carryout, but in the absence of better treatments or a vaccine, it seems unlikely that the foodservice sector is going to meaningfully bounce back anytime soon. The dairy markets in general, and the butter market in particular, are likely to remain under pressure until consumers feel confident enough to dine out in large numbers. Unfortunately, it could be a very long time.

Both corn and soybeans lost about a nickel this week. July corn settled at $3.26 per bushel, while July soybeans closed at $8.4675. Planters are rolling in the Western Corn Belt, with none of the wet weather woes of last spring. Ethanol production continues to drop, and exports are hit-or-miss. Feed demand is likely also declining as the beef industry places fewer cattle on feed, and pork and poultry growers euthanize some young stock. Covid-19 has countless victims.

Today, the recently-formed Elanco Foundation  pledged more than $700,000 to help fight rising food insecurity challenges due to the novel coronavirus outbreak. The funds will support organizations and food banks in communities across Elanco Animal [Read More …]

IDFA continues to track developments on how coronavirus (COVID-19) is impacting the dairy industry within the food and agricultural sector. With improved testing capabilities across the country, the number of confirmed U.S. cases has risen [Read More …]