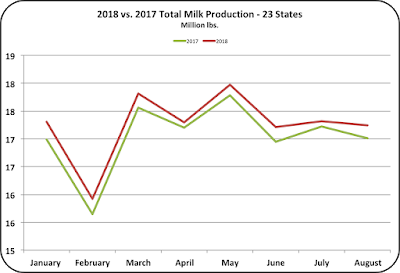 Florida is a good indicator of fluid milk consumption changes, as almost all of Florida’s milk is for fluid consumption. Because fluid milk cannot be held for a long time, it is impossible to build an inventory of fluid milk.  What is produced is consumed quickly.

For years Florida’s milk was the highest paid milk in the country because Class I milk for drinking is the highest paid milk and Florida’s milk is almost all Class I milk.  Now Florida has to contend with a rapidly shrinking market for their milk. The milk produced in Florida (Chart II) has been declining at an increasingly fast rate topped by August’s decline of 7.8% vs. the prior year. 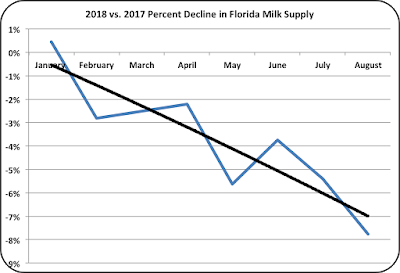 The drop in fluid milk consumption in Florida has also caused a drop in the cow numbers as shown in Chart III.  The most recent change in cow numbers is -4% vs. the prior year. 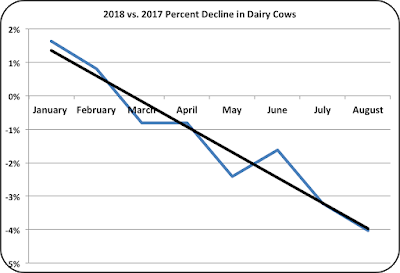 States other than Florida are less influenced by the declining consumption in beverage milk.  Milk volumes going to growth products like cheese temper other states decline in beverage milk.  As an example, the Upper Midwest milk goes mostly to cheese, so it is minimally impacted by the decline in fluid milk consumption.  The milk supply in Wisconsin is up 1.4% in August over the prior year, which is slightly below the current growth rate for cheese consumption.

The overall message on where the dairy industry is going is getting increasingly clear.  Class I beverage milk is declining and the trend appears to be accelerating.  Because Class I is the highest paid milk, the overall average price (the “uniform” price) will also decline.  This, in-turn, will have implications on the producer price differentials, which will also decline and that may lead to further de-pooling.

There is still too much milk in the system and that is being channeled to cheese because it can be inventoried for a longer period of time.  The high cheese inventories will keep the cheese price low and therefore the Class III milk price will remain low.

Although butter was not specifically covered in this post, the continued increase in the consumption of butter will also lead to excess nonfat dry milk/skimmed milk powder, keeping Class IV milk prices low.  Overall, it appears that milk prices will remain “status quo.”

Editor’s Note:  John Geuss is a dairy consultant based in Florida. This information appears in his Milk Price blog column sponsored by Addiseo and is published here with permission.  He may be contacted at johngeuss@gmail.com

How COVID-19 and a Farm Bill Change to Milk Prices Has Cost Dairy Farmers Millions For nearly two decades the price for Class I milk, i.e., milk used to produce beverage milk products, was based [Read More …]

Which Federal Orders Will Grow and Which Ones Will Shrink?

Milk needed in each of the 11 Federal Orders will increase or decrease based on their mix of the four different classes of milk.  Those heavy on fluid milk will shrink with the declining domestic [Read More …]