Although cheese prices are much lower now than they were in June, cheese vats remain full. The other dairy markets tumbled this week as well and the futures bled copious red ink. 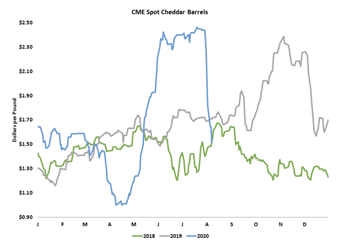 Geronimo! The cheese markets jumped off a cliff this week. CME spot Cheddar blocks stepped off the precipice and plunged a heart-stopping 54.75ȼ to $1.705 per pound, erasing nearly three months of gains. Barrels plummeted 71.75ȼ straight downward, to $1.5175. The fresh cheese shortage is clearly over, and now the market must absorb at least two months of formidable production amidst questionable demand.

Cheese production reached 1.1 billion pounds in June, an all-time high for the month and 3.5% more than the prior year. Cheesemakers rushed to satisfy consumers’ hearty appetite for pizza. Mozzarella output jumped 3.7% year over year. Cheddar production was 1% higher than year-ago levels. Although cheese prices are much lower now than they were in June, cheese vats remain full. Spot milk is moving at steep discounts in the Upper Midwest, allowing processors an attractive margin on whatever extra milk they can squeeze into their plants. 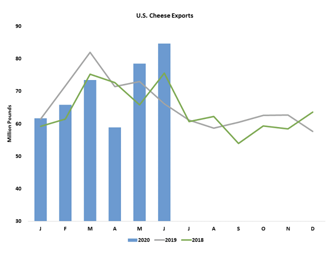 U.S. cheese exports soared in June to a record high of 84.7 million pounds. Mexican buyers were clearly enticed by the fire sale prices earlier in the year. U.S. cheese exports south of the border jumped to a two-year high. Exports to Southeast Asia remained strong. The average price for U.S. cheese and curd exports in June slumped to around $1.77 per pound, the second-lowest monthly value since 2012.

Strong U.S. cheese exports will peter out as higher prices move to the fore. Despite the recent – and substantial – selloff, U.S. cheese remains expensive on the global market, and exporters likely booked very few sales this summer. The vast majority of U.S. cheese is sold domestically. June’s record-breaking exports used up just 7% of U.S. cheese production. The remainder must move through domestic channels, and demand seems to be waning. 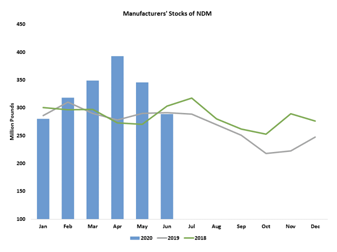 The other dairy markets tumbled this week as well. The powders both lost 2.25ȼ. That put dry whey at an uninspiring 32ȼ per pound. Dragged down by a disappointing Global Dairy Trade auction, nonfat dry milk (NDM) drooped to 95.5ȼ. Combined NDM and skim milk powder (SMP) production fell a little short of last year in June, and manufacturers kept product moving. Strong exports helped to trim stocks to a little below year-ago levels. U.S. NDM exports reached 167.2 million pounds in June. That was short of the record-breaking volume sent abroad in May but up 77.3% from June 2019. Reasonably-priced NDM and the weakening dollar should keep U.S. milk powder exports humming at a good clip. However, cheap whey protein concentrate continues to usurp some of NDM’s market share domestically. 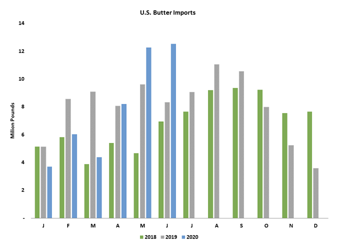 The bulls and bears bandied back and forth in the butter market, but the bears ultimately triumphed. CME spot butter dropped 7.75ȼ this week to $1.53. Butter output slipped seasonally in June as cream became scarce. June butter production totaled 150 million pounds, down 3.1% from a year ago. Butter demand has waxed and waned along with the U.S. foodservice sector, but it is noticeably lower than it was before the pandemic. Retail demand is weaker than it was this spring as home cooks weary of baking. Retailers continue to stock their shelves with imported butter. U.S. butter imports were record high in May and even higher in June. U.S. imports of anhydrous milkfat are lofty as well. 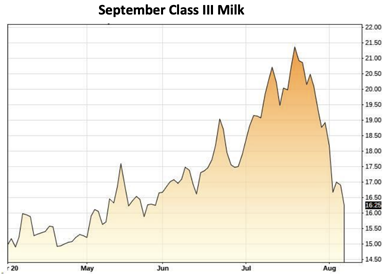 With dairy product prices lower on all fronts, the futures bled copious red ink. August Class III dropped $1.67 to $19.36 per cwt. September collapsed $2.69 from last Friday to $16.23. Fourth-quarter contracts also suffered steep losses, but they managed to hold above $16, notably higher than the sub-$15 lows posted during the pandemic panic this spring. Most Class IV futures lost between 20ȼ and 50ȼ. Class IV contracts are wallowing in unprofitable environs, in the $13 to $14 range.

Dairy producers are doing all they can to capture $19 milk while it lasts. Barns are full and slaughter volumes are unusually low. Mild temperatures in the heartland and cool nights in the mountain states are reducing heat stress. In those regions, milk yields are bouncing back from their summer swoon. There will be plenty of milk as summer fades into fall. Normally, the back-to-school boost in fluid milk sales would help to absorb a share of this new milk. This year, with millions of students learning at home, the school bump may be only a blip. The pandemic continues to sicken demand for dairy.

The feed markets lost ground again this week. The crops are in excellent shape, and the trade expects USDA to raise its estimates of corn and soybean yields substantially next week, when it updates the feed balance sheets next week. This will be the agency’s first take on crop yields that uses survey data. The trade anticipates that the national average corn yield will top 180 bushels per acre for the first time ever. Cheap crops are starting to attract better export prospects, but there will still be plenty of feed in the bin for the next year and perhaps longer. September corn futures settled today at $3.07 per bushel, down 9ȼ from last Friday to a life-of-contract low. September soybeans fell nearly 25ȼ to $8.6575. Soybean meal dropped $9.80 to $282 per ton.

Original Report is at: https://www.jacoby.com/market-report/the-pandemic-continues-to-sicken-demand-for-dairy

Episode 4 of The Dairy Download explores our nation’s rural and urban divide. Is that a real thing? And, if it is, how are leaders in agriculture and rural America working to close the gap? [Read More …]

The American Dairy Coalition (ADC), along with more than 40 other agriculture-related associations, sent a letter to Congressional leadership requesting they replenish the Commodity Credit Corporation (CCC) in their upcoming continuing resolution.  This fund has been [Read More …]

USDA’s latest Cattle on Feed report, released March 20, shows the number of animals on feed to be essentially unchanged from 2019. The report provides monthly estimates of the number of cattle being fed for slaughter. [Read More …]