Splat! Thus ends my daughter’s favorite Sunday school song. “The foolish man built his house upon the sand, and the house on the sand went ‘Splat!’” The Cheddar barrel market also went splat this week. It closed today at $1.695 per pound, down 53.25ȼ from last Friday, a 24% drop. Barrels suffered their worst weekly decline on record along with their worst ever two-day, three-day and four-day losing streaks. Blocks finished 17.25ȼ in the red, at $1.7975. 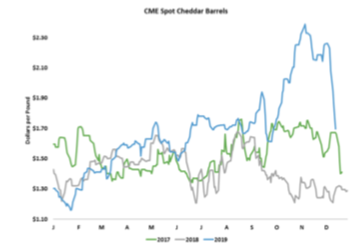 Barrels have now given up all of the October and November rally, which was not built to last. But the market is a bit wiser than the builder in the song. The fall rally was warranted in the short term, and barrels managed to trade above $2 for nearly two months, which is an impressive feat. The market did its job, encouraging production, discouraging sales, and returning to equilibrium at more sustainable values. USDA’s Dairy Market News reports, “Demand [for cheese], in some cases, is falling behind stronger production and

growing supplies.” But cheaper cheese ”may be some enticement for buyers, who have been reluctant with the $2+ market price.” 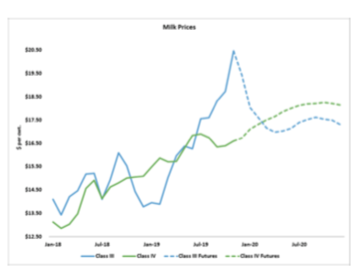 The barrel rally provided dairy producers with a decent October milk check and excellent revenue for November and December. It also boosted 2020 contracts to new highs, and offered opportunities for dairy producers to put in price floors at values above their cost of production. It lifted the market’s assessment of just how high Class III values might climb, which will likely encourage buyers to step in more quickly for fear of being caught short again. For cash-strapped dairy producers, sky-high cheese prices were nice while they lasted, and they lasted for a surprisingly long time. But in the long-run, it’s healthier to have cheese at prices that pay the bills but don’t kill demand. Steady profits are better for the industry than another boom and bust cycle.

Class III futures had anticipated the inevitable decline in barrels. They fell back from last week’s life-of-contract highs, but they did not follow spot cheese off a cliff. Compared to last Friday, most Class III futures finished 15ȼ to 30ȼ lower than last Friday. The January contract slumped 65ȼ, to $18.03 per cwt. In light of the absolute collapse in spot cheese, the futures have been surprisingly resilient.

The whey market also dragged Class III lower. CME spot dry whey fell 3ȼ this week to 33.75ȼ. Whey futures lost a lot of ground as well. This is a bit of a surprise, as Dairy Market News reports slightly higher prices across the country, and increased interest from Mexico and China. News that the U.S. and China have agreed to the outline of a phase one trade deal, should also be a boon for whey demand, especially if China seeks to buy a set dollar amount of U.S. agricultural goods. The Chinese have so far been mum on the details of agricultural purchases. The U.S. has lost a considerable share of China’s whey imports since the first tariffs were levied in April 2018. We have much to regain.

The Class IV markets were quiet this week. Nearby Class IV futures were within a penny or two of last Friday’s settlement. The May contract was hardest it; it fell 15ȼ. All 2020 contracts are at least $17 per cwt., and second-half contracts are north of $18. 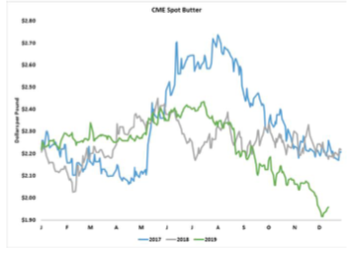 CME spot butter bounced back from a three-year low and climbed 4.5ȼ to $1.96. There is plenty of butter and plenty of cream, so the upside in the butter market may be limited. Spot nonfat dry milk (NDM) slipped a quarter cent this week to $1.265. The milk powder market remains firm as global inventories wane 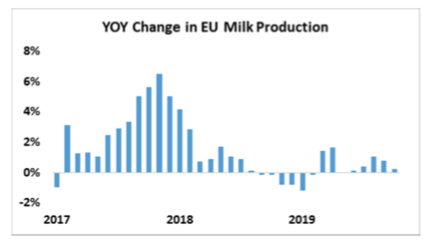 Milk output continues to exceed last year in much of the U.S., but growth in the rest of the world is quite modest. Assuming steady milk production trends in Austria, Sweden, and Greece, milk collections in Europe were just 0.3% greater than last year in October. Among the major players, output was lower than last year in Germany, the United Kingdom, Italy, and Ireland, and higher in France, the Netherlands, and Poland. Production is down hard in Australia and it was short of the prior year during the seasonal peak in New Zealand. Slow growth in aggregate global milk output suggests that the milk powder market is likely to remain firm and that the other dairy products may face limited pressure from overseas pricing. 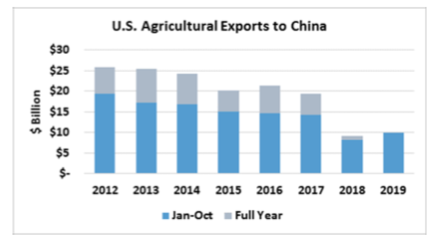 The U.S. and China have not yet announced the details of the phase one trade deal. During negotiations, President Trump promised that China would buy $40 to $50 billion in U.S. farm goods in a single year. Such a sum was unlikely. U.S. agricultural exports to China reached a record high in 2012, when crop values were much higher, at $25.9

billion. Unofficial comments from those close to negotiations suggest that China will attempt to purchase $40 to $50 billion in U.S. goods, but the total will include energy and manufactured goods along with farm products. Although this falls well short of President Trump’s promises to farmers, it is certainly better than the status quo of punitive tariffs and piecemeal waivers. Since China first levied retaliatory taxes in April 2018 U.S. farm exports have withered on the vine. U.S. agricultural exports to China in April through December 2018 fell 68% from 2017. Through October, exports to China in 2019 are 30% lower than during the first 10 months of 2017.

U.S. corn and soybean exports have lagged painfully and there is much room for improvement. The trade war has allowed South America to clean out its bins, creating a vacuum which the U.S. is poised to fill. The new U.S.-China trade accord could foster much larger U.S. crop exports. The feed markets cheered the news but remain cautious about the details. March corn settled at $3.81 per bushel, up 4.5ȼ from last Friday. January soybeans closed at $9.075, up 18.5ȼ.

The following is from Lee Mielke, author of a dairy market column known as “Mielke Market Weekly.” The Agriculture Department raised its 2018 and 2019 milk production estimates in the latest World Agricultural Supply and [Read More …]