Cheese and Class lll Markets Off to a Weak Start but Sprinted to a Strong Finish. 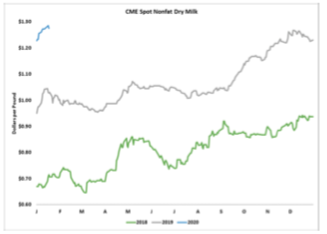 The cheese and Class III markets got off to a weak start, but they sprinted to a strong finish. On Tuesday, CME spot Cheddar barrels dropped to a 10-month low at $1.4675 per pound. That was more than low enough. Barrels came roaring back and finished today at $1.56, nearly a dime higher than the Tuesday trade and up 4ȼ from last Friday. Blocks climbed 9.25ȼ to $1.9625. The powder markets firmed as well. Spot nonfat dry milk (NDM) rallied to a fresh five-year high at $1.285 and closed today at $1.275, up a quarter-cent from last Friday. Whey powder climbed 2ȼ to 36.75ȼ, matching a nearly four-month high. 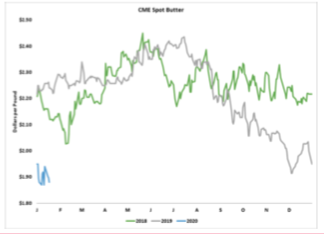 The butter market retreated 4ȼ to $1.88. Fat is cheap and abundant. Dairy Market News reports that butter makers “are taking advantage of the current cream accessibility to store for the spring holiday uptick in ordering.” There was already plenty of butter in storage, which suggests prices won’t be able to rally much in the near future.

Despite the selloff in butter, Class IV futures moved upward. Most contracts settled 10ȼ to 20ȼ higher than last week. Class III futures gained ground too, and the February contract jumped more than 40ȼ. Aside from January Class IV, which stands at $16.77, all 2020 Class III and IV futures contracts are at least $17 per cwt., and May through December Class IV futures are $18 or better.

After falling short in October, New Zealand milk collections exceeded the prior year in November. Fluid milk output topped 3 million metric tons, up 0.3% from November 2018. Milk solids output was 0.4% higher than last year. For the season to date, 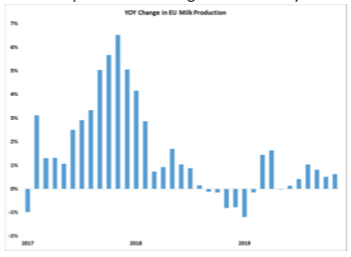 New Zealand’s milk collections are 0.4% lower than at this point in the 2018-19 season on both a fluid and milk solids basis. Strained finances, sweltering temperatures, and raging wildfires continue to devastate Australian milk output. Combined, milk output in Oceania has lagged the prior year in every month since February.

In contrast, European milk collections have bested last year in every month since June. Compared to 2018, European milk output grew just 0.8% in September, 0.5% in October, and 0.6% in November. Milk output was at a deficit in the final months of 2018, so this represents a rather unimpressive increase relative to 2017. 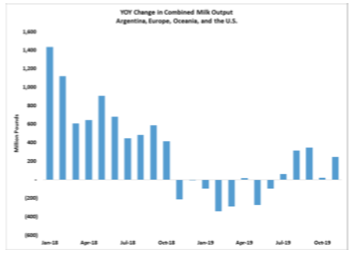 The U.S. and Argentina have managed to step up milk output on a year-over-year basis since July, but growth is similarly tepid. By a slim margin, milk output among these five major exporters expanded in the second half of 2019. Demand grew at a much faster clip, which has helped to trim global dairy product inventories, especially for milk powder. Through November, European skim milk powder (SMP) exports are up 22% from the first eleven months of 2018. But they slumped in November, perhaps signaling that the cupboards are getting bare. USDA’s Dairy Market News reports that if European milk output falters or cheese production climbs, SMP production would likely retreat. If so, it could “possibly reduce SMP exports, because internal EU demand is likely to be the priority.” 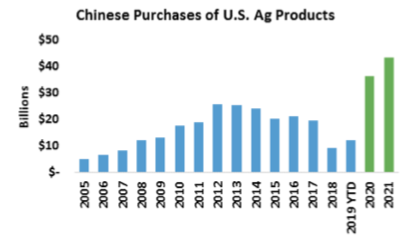 A shrinking European SMP stockpile, a milk production deficit in Oceania, and strong Chinese demand for whole milk powder should add up to even more opportunities for U.S. milk powder exports. And the overall trade outlook got rosier this week. The Senate passed the U.S.-Mexico- Canada Agreement, and the U.S. and China signed their Phase One trade agreement. Neither the U.S. nor China will lower tariffs as part of the Phase One deal, which leaves many U.S. farm products at a disadvantage. However, Beijing has issued waivers and exemptions for formerly punitive tariffs on a number of U.S. dairy products, including dry whey, infant formula, and some cheese varieties. Chinese tariffs on U.S. milk powder remain in place for now. China committed to purchasing far more U.S. agricultural goods than they ever have before, although they made it clear that purchases will be dictated by market conditions, and not by goodwill.

Perhaps of greater consequence in the long run, Beijing promised to make important structural changes that will remove non-tariff barriers that have historically kept out many U.S. exports. China will accept the U.S. dairy-safety system, forgoing the need for Chinese inspections in U.S. facilities looking to export. China will also open its market to imports of human-grade permeate, ultra-filtered milk, fortified milk, extended shelf life milk, and infant formula. Although many naysayers and skeptics were quick to question China’s ability to meet its promised purchase targets, the deal brings clarity and offers many important policy changes that will surely boost U.S. farm exports at the margins.

The feed markets initially expressed their disappointment with the details of the trade deal, which dashed hopes that Chinese importers would be “encouraged” to purchase U.S. crops even while South American supplies are cheaper. Feed futures finished deep in the red on Thursday.

But after a chance to sleep on it, the grain trade seemed mollified and even cheered by the pact. There is much to like. China has promised to reallocate unused tariff rate quotas (TRQs) for wheat, corn, and rice. TRQs are intended to allow importers to purchase a set annual volume of foreign grain at a lower tariff rate, but Beijing often rendered TRQs ineffective by giving them to state-owned entities who had no intention of importing foreign crops. In this way, China dodged WTO trade rules on outright import bans and effectively shielded the domestic grain industry from competition.


The trade deal will also streamline the approval process for biotechnologies and strains of genetically modified crops. Until now, China has dragged its feet on such approvals in order to protect its fledgling industrial grains sector. The changes will crack open the door for more Chinese imports of U.S. corn, wheat, rice, sorghum, dried distillers grains, and ethanol. Although China may not boost imports of U.S. grains and oilseeds immediately, these structural changes are likely to tighten global feed supplies over time.

The International Dairy Foods Association announced the names of nearly 100 dairy executives who have been selected to serve as directors on the association’s newly formed Industry Segment Boards. These boards, which will launch in [Read More …]

Milk Production is Decreasing. – Is it Enough?

In 2018, there was more milk being produced than was needed.  A lot of that excess milk went into cheese, bloating inventories and making wholesale cheese prices fall.  That directly affected producer prices.  Six months [Read More …]

Barrels Give Up The October And November Rally Which Was Not Built To Last Splat! Thus ends my daughter’s favorite Sunday school song. “The foolish man built his house upon the sand, and the house [Read More …]