Summer is winding down, but the cheese markets are still sizzling. CME spot Cheddar blocks jumped a nickel this week to $1.93 per pound, the highest value since November 2016. Barrels climbed 7.25ȼ to $1.7375. Gains of this size in an already lofty market are truly impressive. Last week’s Cold Storage report showed an astounding drawdown in cheese inventories, and the spot markets suggest that fresh supplies are tight. USDA’s Dairy Market News reports that demand for cheese “is strong in the Midwest and West, stable and gradually improving in the Northeast. 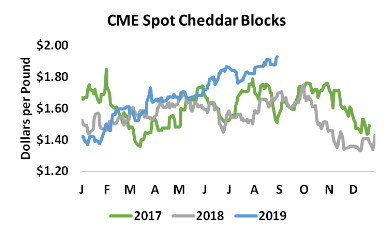 Whey is a bargain, and it is starting to attract buyers. Manufacturers’ inventories have declined this year, but this may reflect a shift in ownership rather than an increase in consumption. Exports remain depressed as African swine fever sweeps through the world’s largest hog herd. 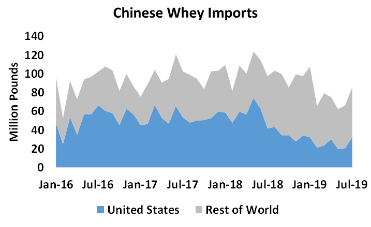 volumes of 2014. China has stepped up imports from Europe, which is likely helping to use up the SMP that was once housed in the Intervention storage program. SMP prices in Europe stand near calendar-year highs, but they haven’t gained much ground when priced in U.S. dollars. In Chicago, prices are holding firm. CME spot nonfat dry milk (NDM) added a quarter-cent and closed at $1.04.

The butter market is in retreat. CME spot butter fell Thursday to a new low for the year at $2.185. It closed today at $2.19, down 3.75ȼ from last Friday. Stocks are more than adequate to accommodate holiday demand, and cream has gotten cheap. Dairy Market News notes that in the 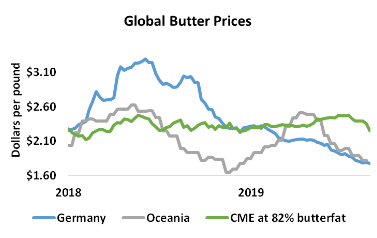 Dairy producers’ profits have stabilized in recent months. As expressed in the Dairy Margin Coverage program, national average income-over-feed margins reached $9.47 per cwt. in June, up 47ȼ from May. Margins slipped 4ȼ from June to July, as higher cash corn prices offset a 60ȼ increase in the national All-milk price. Despite larger milk checks, dairy producers are still strapped for cash. Slaughter volumes remain high, suggesting that the dairy herd continues to contract. In the week ending August 17, dairy producers sent 61,637 cows to the packer, the highest weekly volume since April. Year-to-date slaughter is 3.9% ahead of the 2018 pace, no small feat given the much smaller 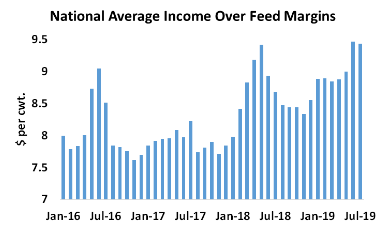 The grain markets are simply marking time until the harvest reports begin to roll in. After a cool, cloudy summer, the combines will sit in the shed a week or two longer than normal. Even those crops that were planted on time are likely to finish late, making much of the crop vulnerable to a killing frost. There are no freezing temperatures in the forecast, but if a frost arrives in late September or early October, it would ding crop yields noticeably.

Field surveys make it clear that this year’s crop will be smaller than last year’s harvest, and that USDA’s August assessment was likely a little too high. But stockpiles are large and demand has fallen short of expectations. Corn futures are going nowhere fast. In the Eastern Corn Belt, where spring was particularly difficult, a sky-high basis has lifted cash corn prices for end users. December corn futures settled today at $3.6975 per bushel, up 2ȼ for the week. The soybean market was more volatile, bandied about by the latest emotional consensus about the status of the trade war. November soybeans closed at $8.69, up 12.25ȼ from last Friday.

The National Dairy Council (NDC) New Product Competition seeks the next innovative dairy product from college students across the United States and Canada. The goal of NDC’s eighth annual competition is for students to develop [Read More …]

Dairy product purchasing differs in households with and without children American dairy consumers are often influenced by a variety of factors that can affect their buying habits. These factors include taste, preference, government information, cultural [Read More …]