This Year Began With a Whimper But Will Finish With a Bang. 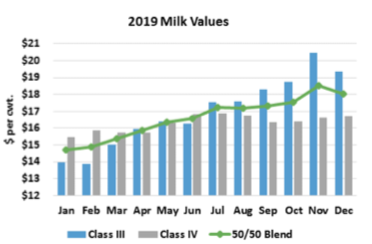 This year began with a whimper, but it will finish with a bang. Assuming a 50/50 blend of Class III and IV values, dairy producers pocketed just $14.72 per cwt. for their milk in January, a woefully inadequate sum. Revenues improved throughout the year, finally peaking at a blended average of $18.53 in November. December is likely to average $18.04. Throw in an extra 75ȼ on the Class I share of the milk check, and there will be enough to cover the month’s expenses and some of the bills in arrears. That’s not sufficient to undo years of financial distress, but it is the highest revenue dairy producers have seen since 2014, and it is worthy of celebration.

The latest Milk Production report highlights both the strains and the successes of 2019. According to USDA, dairy producers responded to the promise of higher milk prices by adding 5,000 cows in September and 9,000 head in October. But they paused in November, and the herd held steady at 9.331 million head. There are 27,000 fewer cows than there were in the national milking herd in November 2018, the narrowest year-over-year deficit since the middle of last year. The promise of better revenues enticed some dairy producers to fill their barns, but the appetite – and the capital – for significant expansion remains limited. 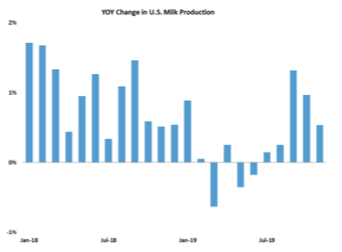 In recent months, strong milk yields have driven growth in milk output. In November, milk production per cow once again exceeded last year, but the 0.8% year-over-year increase was the smallest since May. Milk yields were steady with last year in Idaho, Iowa, and Washington, and they fell below last year in Arizona and Wisconsin. In most of the other major dairy states, milk production per cow exceeded the prior year by a slimmer margin than in the preceding months.

Milk output in America’s Dairyland dropped 1.6% from a year ago, the steepest deficit since 2014. A harsh cold snap seems to have trimmed milk 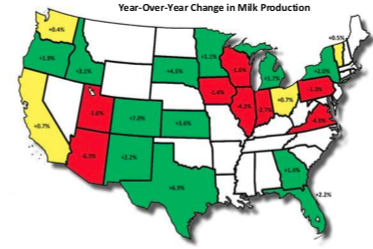 yields throughout the Midwest, but feed quality is likely also to blame. Farmers in Wisconsin have suffered their wettest year on record, and this year’s hay and corn silage harvests are much the worse for it. It’s likely that bad hay is just starting to impact milk production there, with many months of low-quality rations still in the offing. Wisconsin’s woes may be a harbinger for the entire region, as most of this year’s questionable corn silage is still on the feed slab. In 2020, as dairy producers add this year’s forages to their rations, milk yields could fall well short of potential in the Upper Midwest.

In October, milk output was up just 0.3% from last year in Europe and well below last year’s record-setting volumes in New Zealand. High debt loads and ever-stricter environmental regulations are likely to keep expansions in check in both places. Demand for dairy is surely growing more quickly than global milk output.

Milk powder and butter values moved lower at the Global Dairy Trade (GDT) auction on Tuesday, while Cheddar climbed 1.7% and anhydrous milkfat improved slightly. The GDT Index slumped 5.1%, dragged down by a 6.3% drop in the average price of SMP and a 6.7% slide in WMP values. Adjusted for protein, GDT SMP is equivalent to nonfat dry milk (NDM) at $1.39 per pound. Like the CME spot Cheddar market, it looks like GDT milk powder may have run too far, too fast in November and early December. However, the milk powder stockpile is considerably smaller than it once was and demand is healthy. This week’s setback looks like a correction in a bull market rather than the start of a new downtrend. 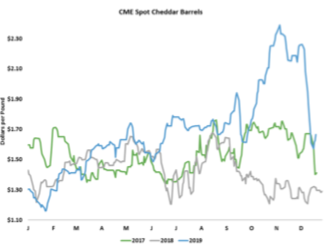 The drama continued in the cheese markets. Barrels started this week just as they finished the last one, extending their precipitous and historic drop. But on Wednesday they reversed course, and they continued to gain ground as the week progressed. They closed today at $1.665, down 3ȼ from last Friday but nearly a dime higher than the Tuesday low. Blocks followed a similar pattern, but compared to barrels their early-week losses were more modest and their late-week gains more decisive. Blocks finished at $1.86, up 6.25ȼ. Spot whey fell 2.5ȼ this week to 31.25ȼ. Nearby Class III values moved sharply lower. The January contract fell 67ȼ to $17.36. But March through July Class III posted double-digit gains, and most deferred contracts are only a dime or so below the recent highs. Both Class III and Class IV futures reflect the potential for a prosperous new year, characterized by modest growth in milk output and tighter dairy product inventories.

The feed markets continued to gain ground, as demand prospects improved. Rising global vegetable oil prices pushed March soybeans up to $9.3825 per bushel, 16.75ȼ higher than last Friday. Soybean meal values were up only slightly. The March contract closed at $302.20. March corn closed at $3.8775, up 6.75ȼ. U.S. corn is the cheapest in the world, which suggests there is room for higher prices and bigger exports. 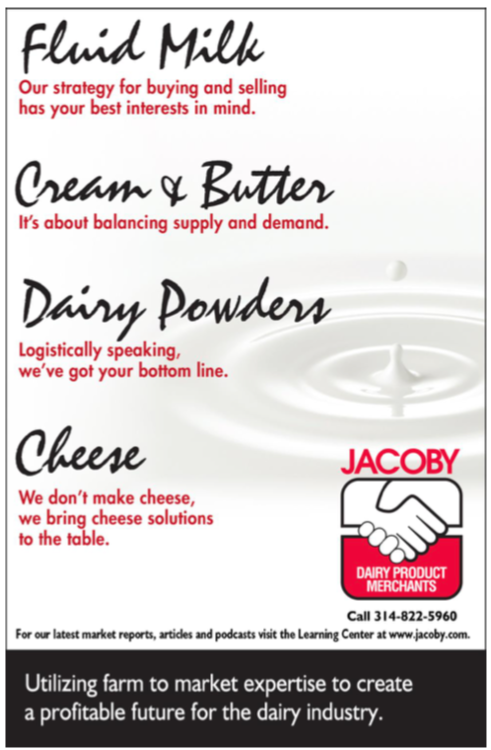 Overview Fallout from the developing tariff conflict between the United States and some of its major trading partners has already had a major, negative impact on the price outlook for U.S. dairy farmers. But these tariff actions [Read More …]

Rising risks as milk production in the Big 7 screeches to a standstill – according to Rabobank’s Dairy Quarterly Q1 2019 report.     The final milk production tallies for Q4 2018 are complete. Collections [Read More …]