Dairy Producers Should Be Brimming With Holiday Spirit

Pass the eggnog, please. Dairy producers should be brimming with holiday spirit this year, as Christmas present promises to be much more cheerful than Christmas past. USDA announced the November 2019 Class III price at $20.45 per cwt. That’s the highest Class III price in five years and it is more than $6 – yes, $6! – above where it was a year ago. That’s a lot of Christmas cheer heading for dairy producers’ mailboxes. At $16.60, the November Class IV price pales in comparison but it is still up 21ȼ from October and $1.54 better than November 2018.

As befits the season, the dairy trade has feasted on data since last week. For the most part, the Dairy Products and 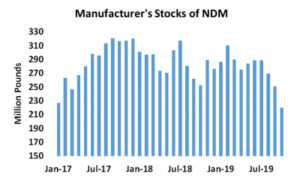 At the Global Dairy Trade (GDT) auction on Tuesday, butterfat products moved lower, while Cheddar and milk powder moved higher. Both skim milk powder (SMP) and whole milk powder (WMP) climbed to five-year highs. CME spot nonfat dry milk (NDM) echoed the GDT strength. It closed today at $1.2675 per pound, also a five-year high. Spot NDM has advanced 4.75ȼ in the past two weeks. Despite an uptick in drying activity in October, manufacturers’ stocks of NDM contracted to their smallest sum in nigh on three years. Exports are lapping up a lot of product. The U.S. sent 156 million pounds of NDM/SMP abroad in October, 16.6% more than last year and the third-highest monthly volume on record. Chinese SMP imports dropped below year-ago levels in October, but they are still more than 27% ahead of 2018 for the year to date. 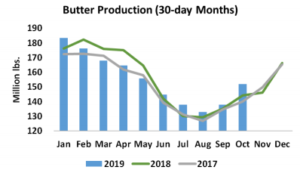 The butter market is suffering a holiday hangover. Sales are strong, but churns remain active. U.S. butter consumption is running about 2.5% higher than last year, but domestic output exceeded the prior year by 5.9% in July, 2.8% in August, 2.1% in September and 5.4% in October. At 157 million pounds, October butter production was the highest ever for October in more than a century of USDA records. Cream is cheap and so are imports, which will make it difficult to reduce butter inventories in the near term. The butter market has been crushed under the weight of these heavy supplies. CME spot butter closed today at a three-year low of $1.915, down 11ȼ over the past two weeks. Lower butter values dragged on nearby Class IV pricing, while deferred contracts continued to gain ground. In the past two weeks, December through February Class IV futures have lost around 25ȼ. 2020 Class IV futures average 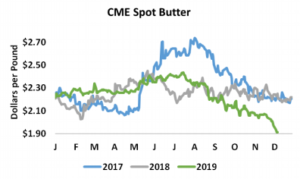 CME spot Cheddar blocks staged an impressive comeback, although most of the gains took place before Thanksgiving. Blocks closed today at $1.97, up 12.75ȼ over the past two weeks. Barrels lost ground this week and closed at $2.2275, 4.25ȼ higher than where they stood on Friday, November 22. U.S. cheese output reached an all-time high in October 2018; production fell 2.1% short of that mark this year, but it was still quite high. For the year to date, U.S. cheese production is 0.8% greater 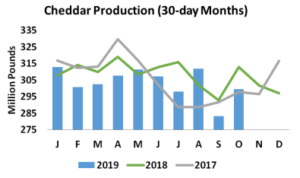 than in the first ten months of 2018. However, Cheddar production continues to lag, as cheesemakers focus on consumer preferences rather than forcing as much milk as possible into commodity cheese vats. In October, Cheddar output was 4.2% smaller than the prior year, widening the year-to-date deficit to 2.6%.

Whey values continued to rebound. CME spot whey climbed 2ȼ to 36.75ȼ, the highest value since September. A modest decline in whey stocks likely allowed the spot market to stabilize after the steep selloff in October. However, the fundamentals of the whey market remain a concern. Dry whey output has topped the prior year in each of the past three months despite lower cheese output, as whey processors have slowed output of value-added products 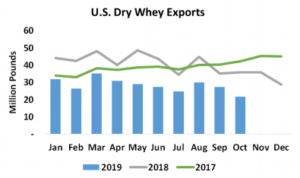 like whey protein concentrate, signaling poor demand. Tariffs continue to bite. Whey powder exports were abysmal. They fell to less than 22 million pounds in October, the smallest monthly volume in 15 years. So far in 2019, the U.S. has exported 133 million fewer pounds of dry whey than in the first ten months of 2018.

With firming spot markets, nearby Class III futures gained considerable ground last week. The December contract jumped 77ȼ to $19.54. Most 2020 futures climbed to life-of-contract highs last week, but then retreated in the latter half of this week. At the closing bell, first-quarter contracts were higher than they were in the week before Thanksgiving, while most deferred contracts were a penny or two lower.

The grain markets moved back and forth but ultimately settled lower than they did two weeks ago. March corn closed at $3.765 per bushel, down 2ȼ. At $8.89, January beans were 8ȼ in the red. The soybean market remains vulnerable to trade headlines. A Chinese official says China has waived the tariff on U.S. soybean imports, but details are scant.

Harvest has slowed to a crawl in the northern states, where around 1.5 million bushels of corn are still in the field. Several weeks of wind and snow surely didn’t do the crop any favors. U.S. corn demand has been unusually soft, muting the impact of the poor, drawn-out harvest. Ethanol output slowed this summer and into the fall, when the corn basis reached untenable heights. Export volumes have languished as the basis and the strong dollar made South American crops more affordable in foreign currencies. Now, ethanol production is back near year-ago volumes, and South American grain bins are mostly empty. U.S. corn demand is poised to improve which should at the very least provide a floor under the corn market.

The original report can be found at: https://www.jacoby.com/market-report/dairy-producers-should-be-brimming-with-holiday-spirit/

In farm country outside Buffalo, New York, you will find Frank Valent working with his 80 or so Holstein and Jersey cows to put milk on America’s table. Travel about 200 miles southeast to Ohio, [Read More …]