The Dairy Markets Got Off To A Rough Start This Week

The dairy markets got off to a very rough start this week. Sentiment improved by Friday, but the damage was done. CME spot Cheddar barrels fell to an 11-month low on Monday and tested the same waters again on Wednesday. They regained much of the ground they lost and closed today at $1.4775 per pound, down 2.25ȼ for the week. Block supplies are not nearly so burdensome, and it shows. They climbed a penny this week to a very respectable $1.93. 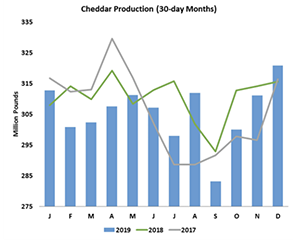 The market is still suffering a hangover after overindulging in October and November. Sky-high cheese values late last year boosted Cheddar supplies and weighed on cheese demand. After robust Mozzarella production most of last year, cheesemakers shifted milk into Cheddar vats in December. Cheddar production reached a nearly two-year high, and topped December 2018 by 1.7%. In contrast, Mozzarella output fell 1.6% from the prior year. Higher Cheddar output likely prompted the steep selloff in CME spot Cheddar barrels. Discounts in the spot milk market in the Midwest suggest that Cheddar output is still formidable. 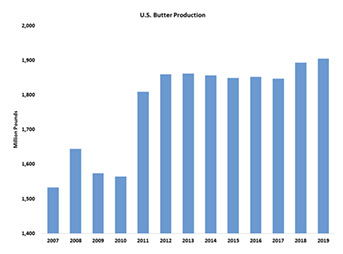 The butter market softened further. Spot butter fell 6.75ȼ to $1.8325. Butter production jumped 4% from the prior year in December, lifting full-year output by 0.8% to the largest annual total on record. Demand is simply not keeping pace, and butter values continue to slump. U.S. butter has fallen far enough to perhaps stave off another wave of imported butterfat. There is more than enough cheap domestic cream for the market to absorb.

The powders fared much better. CME spot whey climbed 2.5ȼ to 39ȼ per 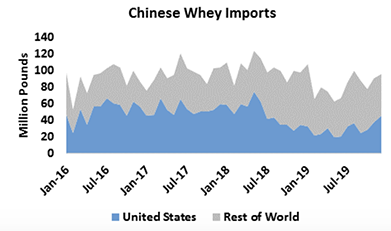 pound, its highest value since September. The whey market has good reason to rebound. Chinese whey imports appeared to stabilize in December. They were just 1.7% lower than in December 2018. This suggests that demand destruction wrought by African swine fever may be starting to ebb. Furthermore, Chinese importers have turned their attention back to the U.S. after tariffs were waived. Chinese imports of U.S. whey jumped 33% compared to December 2018. The data and the détente bode well for U.S. whey exports to China in 2020.

Processors are flush with milk throughout the West, and the driers are running hard. In December, 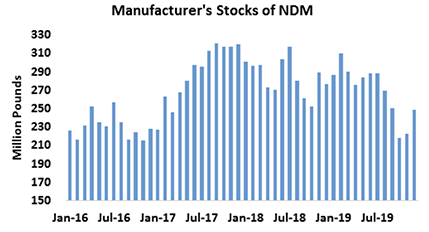 Milk powder values moved decidedly lower at the Global Dairy Trade (GDT) auction on Tuesday. Whole milk powder (WMP) fell to a six-month low, down 6.2% from the previous auction. SMP dropped 4.2%, to the equivalent of NDM at $1.41 per pound. Fears that the coronavirus would continue to spread likely weighed on GDT values as the market priced in the risk that Chinese consumption will falter. 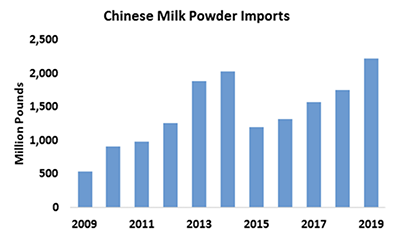 But the fundamentals of the milk powder market are otherwise sound. Global stocks are significantly tighter, and China’s appetite remained formidable throughout 2019. Chinese WMP and SMP imports in December topped the prior year by 65% and 29%, respectively. China brought in a record-breaking volume of SMP in 2019. While WMP imports fell short of the high set in 2014, they were still 29.5% greater than the 2018 total. New Zealand is China’s main supplier, but the Kiwis are not likely to finish strong. Drought is taking hold on the North Island. Strong Chinese demand and tighter New Zealand milk powder supplies leave room for both the U.S. and Europe to sell SMP at a heady clip.

Whey, NDM, and Cheddar blocks helped to shore up the dairy futures by Friday, but they could not entirely overcome the red ink from early in the week. Most Class III futures finished roughly 5 to 10ȼ lower than last Friday. The March contract plummeted 33ȼ, finishing the week out at $17.42. All 2020 contracts stand above $17 per cwt. Weakening butter values weighed on the Class IV market. Most futures contracts lost between 15 and 20ȼ.

On Thursday, China promised to cut in half the tariffs that took effect on September 1. In that round, China boosted the tariff on U.S. soybeans by 5%. Under the new rates, U.S. soybeans will face a 27.5% border tax beginning next Friday, rather than the current 30%. That’s a step in the right direction, but a pretty small one, and the soybean market’s reaction was appropriately miniscule. China will buy more U.S. farm goods, and soybeans top the list. But those purchases will likely depend on Beijing offering importers exemptions on the border tax, just as they have 1716 Hidden Creek Court P 314.821.4456 E info@jacoby.com Suite 200, St. Louis MO 63131 for the past six months. Meanwhile, crop analysts continue to raise their estimates of the size of the South American soybean crop, and those crops enjoy a big currency and tariff advantage.

Dairy producers in the Midwest continue to reap the consequences of a very rough season. As they dig into new crop forages, many in the region are watching in dismay as milk yields fall. But, judging by the spot market, there is still plenty of milk to be had. 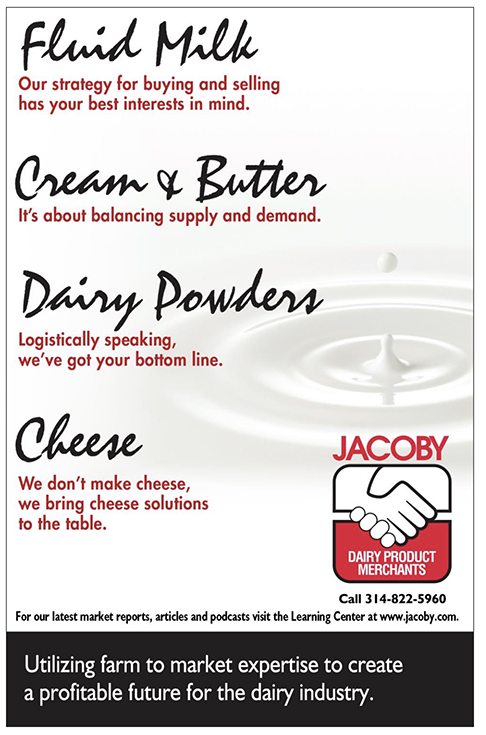 Original report can be viewed at: https://www.jacoby.com/market-report/the-dairy-markets-got-off-to-a-rough-start-this-week/

Dairy Markets Provide Plenty Of Fodder For The Bulls

The dairy markets have had a slew of data to digest in the past two weeks, providing plenty of fodder for the bulls. The Global Dairy Trade (GDT) auction kicked things off last Tuesday with [Read More …]