Since mid-April, the Class III markets have been climbing ever higher, with only a few switchbacks slowing their ascent. 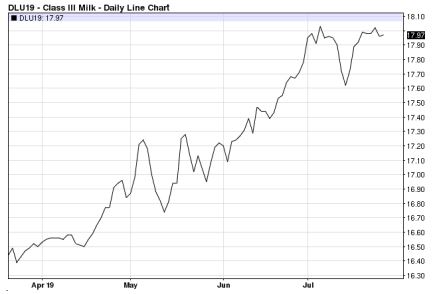 Their relentless progress would be the envy of the most seasoned mountain climbers. Now, it appears they have reached the ridge. Higher peaks loom in the distance, and the fundamentals suggest the markets have the stamina to reach them. But the path along the mountain’s spine does not lead as steadily upward. The trade is tired and less surefooted. The markets are more exposed to the elements, and the air is thinner as they approach $18 per cwt. than it was in the lower elevations.

Dairy producers would surely prefer the energy of the early-stage rally to today’s more plodding progress. But the plateau is a sign of healthy markets at work. Buyers who balk $1.80 cheese and $1.05 milk powder must be given time to become accustomed to the new normal and verify that scarcity does justify these higher costs. The acclimatization is happening quickly. USDA’s Dairy Market News reports, “There are fewer loads [of cream] available in the East. Buyers who were not willing to pay higher multiples a couple weeks ago are now ready to meet sellers’ demands.” In the Midwest,cheese makers are increasingly inclined to pay a premium for spot milk, when they had grown  used to buying at steep discounts. In the eastern two-thirds of the nation, milk powder driers are running below capacity, as they were meant to do at this time of year. Higher prices and lower volumes are pushing milk to their best use, to the benefit of dairy producers who will enjoy a better blend, higher premiums, and lower hauling deductions.

The butter market, which has stood firm in the face of falling foreign prices, is looking a bit fatigued. USDA reported June 30 butter stocks at 327.8 million pounds. Although that is 2.6% less than the prior year, it is 4.4% more than in May. The surprisingly large month-to-month stock build and a prevalence of cheap, imported butterfat weighed on pricing this week. 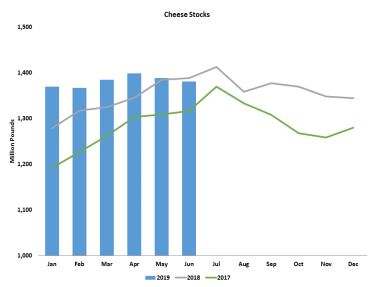 USDA’s Cold Storage report was more friendly to the cheese markets. It showed June 30 cheese stocks at 1.38 billion pounds, down 0.5% from a year ago. This is the first year-over-year decline in cheese stocks in nearly five years. Inventories of American cheese fell 1.9% below year-ago levels, the smallest June total since 2016. The report is evidence of robust cheese demand and the impact that lower milk volumes have had on commodity cheese production.

Milk output continues to slow. U.S. production totaled 18.2 billion pounds in June, down 0.3% from a year ago. Declines throughout the East, Midwest, and in much of the Southwest overwhelmed gains in Texas, Colorado, California, and the Pacific Northwest. The dairy herd is still 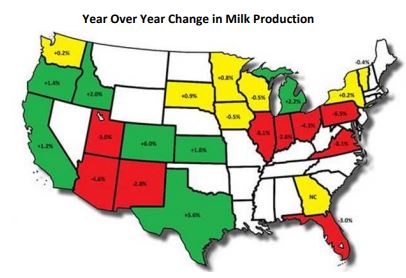 shrinking, setting the stage for a further setback in milk production. USDA puts the milk cow herd at 9.323 million head, down 10,000 head from May and 91,000 fewer than in June 2018. Slaughter rates are still high. Through the week ending July 13, dairy cow slaughter was 4.7% ahead of the already aggressive pace set in 2018, when the dairy herd was much larger. Springer prices are stagnant, evidencing little appetite for expansion. Dispersals continue. Eventually, higher milk prices will prompt more milk production, but that seems a long way off.

The weather isn’t helping. A sweltering week in the Midwest and Northeast reduced milk volumes noticeably, although extreme temperatures have since abated and the milk is starting to come back. California’s Central Valley, home to the highest concentration of dairy cows in the nation, is expected to suffer triple-digit highs for the next week or more. However, cows are still thriving in the Pacific Northwest and the mountain states. 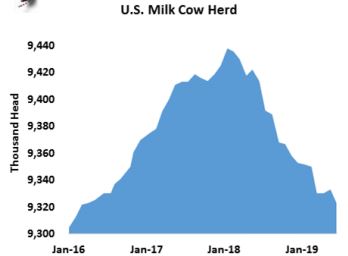 In Europe, the situation is dire. The mercury climbed higher than it ever has before in France, Germany, Belgium, and the Netherlands. The United Kingdom – one of the major engines of growth in European milk collections – has unofficially reported its highest temperature among records dating back to 1659, the oldest temperature series in the world. Fields and pastures across the continent are parched, and farmers in parts of France are not allowed to irrigate. Dairies in Western Europe are not equipped to handle high temperatures. Milk production is sure to suffer.

The heat wave loosened its sweaty grip on the Corn Belt, and the grain markets cooled down too. More typical temperatures are particularly good news for corn, as much of the crop is beginning to pollinate.

Corn does not fare well in the extreme heat; many years with sub-par corn yields feature above-average July and August temperatures. The forecast calls for average to below-average temperatures into next week. However, the crops could use a drink.

Researchers from the Unversity of Nebraska at Lincoln warn in their weekly Drought Monitor commentary that although drought is not an issue, “short-term dryness has begun to adversely affect some Midwestern corn and soybeans, with impacts exacerbated by late planting, poorly developed root systems, and soil compaction.”

There are also concerns about demand. News that China would allow some processors to purchase U.S. soybeans without paying the retaliatory 25% tariff failed to move the market much. African swine fever will reduce feed consumption throughout Southeast Asia. U.S. soybean stocks are abundant, and worries about crop conditions seem to have been shoved to the background for now. 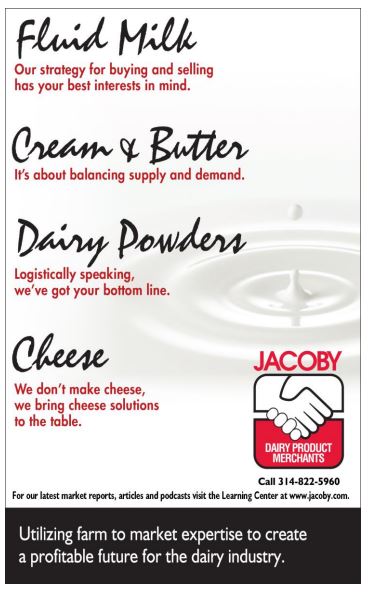 Management of calves has a substantial influence on calfhood performance. A common practice that has been used for many years is to raise calves in individual hutches from the time of birth until shortly after [Read More …]