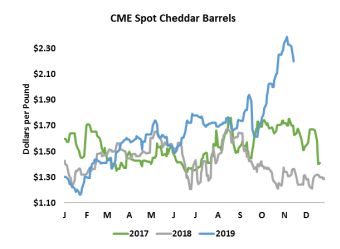 The spot cheese markets succumbed to the laws of gravity this week. CME spot Cheddar blocks tumbled 12.5ȼ, and barrels plummeted 13.25ȼ. But spot Cheddar had climbed to such heights that even after this week’s precipitous descent it is still at a rather lofty perch. Cheddar blocks closed at $1.89 per pound, an elevation they never once approached in 2017, 2018, and most of 2019. Barrels stand at $2.1975. Aside from the past three weeks, that’s the highest value for spot barrels in more than five years.

The markets are doing their job. Barrel supplies were inadequate to meet demand, so prices skyrocketed to boost output and reduce consumption. Right on cue, USDA’s Dairy Market News reports that “some regional cheesemakers are reporting slower sales” in the Midwest, and “cheese production has been busier in November.” In the West, cheese output is seasonally high, with “continuous good flows of milk to the vats.” Nationally, fewer retailers are featuring cheese in their promotional highlights than at this time last year. However, cheese consumption remains firm enough to forestall a steeper setback, and some manufacturers in the central region tell Dairy Market News that “buyers remain motivated during the holiday demand season.”

The futures markets had anticipated a decline and largely shrugged off the spot selloff, suggesting that cheese values have held up for longer than the trade expected. Indeed, while December cheese and Class III futures lost ground this week, the November contracts moved appreciably higher. 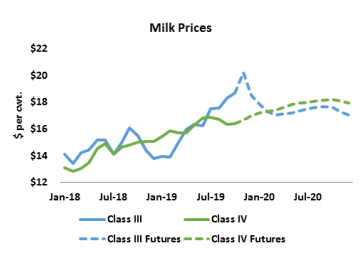 Class III futures also got a boost from the whey market. CME spot whey jumped 4.5ȼ this week to 32ȼ, a more than 16% increase. Spot whey values haven’t been this high since early October. Whey inventories are adequate and exports remain depressed. But the market seems to once again feel that the worst has passed and that the next big move is likely to be upward. Before this week’s rebound, there wasn’t a lot of room for prices to go much lower. Whey futures also moved decidedly higher this week, and most Class III futures did as well. Pressured by spot cheese, December Class III fell 53ȼ to $18.56 per cwt. But all other contracts – including nearby N ovember – moved upward with vigor. February through December 2020 Class III futures established life-of-contract highs.

November Class IV futures slipped a penny lower this week, but the other contracts finished higher. First-half 2020 contracts stand comfortably above $17, and second-half futures are north of $18. CME spot butter regained some ground; it climbed 3ȼ to $2.0675, still at the lower end of 2019 values. Cream supplies are starting to tighten as the holidays draw near. Multiples are perking up, but they remain well below last year and the historic average. Inexpensive butter has helped to boost sales, and butter makers report strong demand. Retailers are featuring more butter at lower prices than they did in recent weeks, but promotions are pricier and less frequent than they were a year ago. Given the strong economy, most consumers are likely to notice that butter is on sale, and not draw comparisons to last year’s bargains. 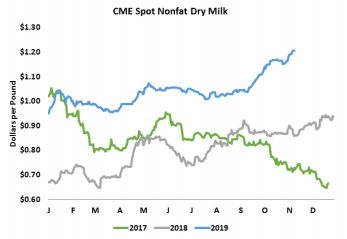 Once again, CME spot nonfat dry milk (NDM) climbed to a new five-year high. This week, spot NDM reached $1.2175, up 1.25ȼ from last Friday. The rally in milk powder prices seems less dramatic and more sustainable than the fireworks seen in spot cheese. Milk powder is moving in large volumes to cheese vats and to foreign buyers. Inventories are tightening, and much of the product in warehouses is committed, reducing the supply available to be sold. 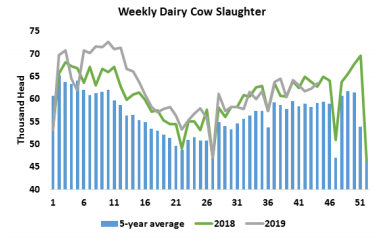 higher than last year despite the smaller dairy herd. Milk is particularly plentiful in the West. Moderate temperatures are keeping milk yields and components high in the Pacific Northwest and mountain states; excess loads are moving at steep discounts. Cull cow prices are climbing and the $20 milk check hasn’t hit the mailbox yet. Slaughter volumes remain on par with the incredibly high totals of a year ago, and the dairy herd is noticeably smaller. 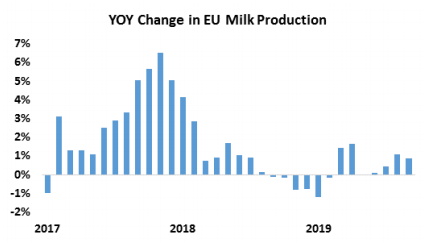 0.9% from last year. Nine of the ten major dairy nations reported year over-year increases, but the EU’s fastest-growing members are shifting into lower gear. Compared to September 2018, output was up just 0.2% in Ireland, 0.3% in the United Kingdom, and 0.8% in  Poland. With tepid growth in milk output on both sides of the Atlantic, demand likely continues to outpace supply.

For much of the week, the tone of trade headlines was negative, which didn’t help soybean values. Today, Commerce Secretary Ross and White House Economic Advisor Kudlow painted a rosier picture, but the deal is not done yet. The trade is weary of promises and waiting for both sides to put something in writing.

It’s mostly dry in the Corn Belt, which allowed for some harvest progress. This season continues to frustrate farmers. The late crop suffered in the early cold snap, and in some areas crops are buried in snow. A regional propane shortage has boosted the cost to dry corn for storage and reduced the incentive to hurry to get it out of the field. But there’s more than enough corn to meet underwhelming demand. Exports and ethanol production have been disconcertingly slow, which has weighed on grain values. It’s likely that both export and ethanol demand will accelerate, but for now, there’s plenty of corn despite the poor harvest. 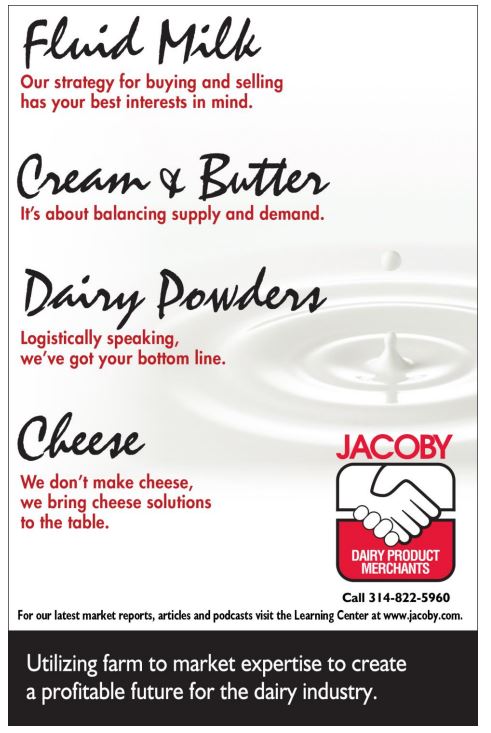 Indiana May milk production down slightly