The dairy markets got off to a strong start this week, which allowed most contracts to gain ground despite a Friday selloff. November and December Class III futures settled a dime lower than last week, but the other contracts finished higher. October Class III reached $18.31 per cwt., up 16ȼ. Class IV futures closed higher across the board. 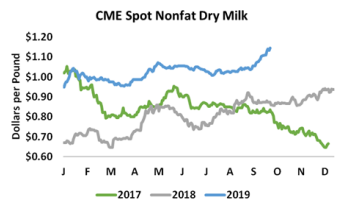 In August, NDM/SMP output totaled 183.6 million pounds, up 3.9% from a year ago. The year over-year increase was a 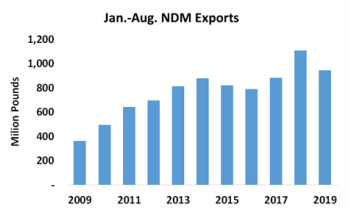 bit surprising, but in light of falling stocks and rising prices, it simply confirms that demand is strong. U.S. milk powder exports fell short of last year’s record breaking volumes once again in August, but they remain historically high. Foreign buyers are competing for powder with U.S. cheese makers, who are using skim milk solids to fortify their vats while milk is tight and cheese is pricey. Milk powder stocks are falling around the world and prices are rising accordingly.

High domestic prices restrained U.S. cheese exports and boosted imports in August. Tariffs on European cheese imports will take effect later this month, which could reduce U.S. cheese imports going forward. Eight of our top 10 suppliers of imported cheese are in the EU-28 and will be subject to the new tariffs. The tariffs could also slow the flow of butter from Ireland to U.S. retailers. 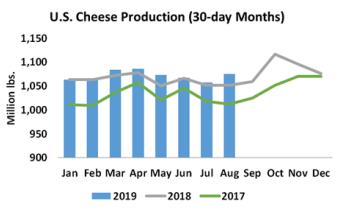 U.S. cheese output reached 1.1 billion pounds in August, up 2.2% from a year ago. Production of American-style cheese reached the highest level in nearly a century of USDA record-keeping, up 5.1% from a year ago. With a mild summer and a larger milk-cow herd, Idaho boosted American cheese output 20.9% from a year ago in August. Expanded processing capacity in Iowa compelled the Hawkeye State to expand American cheese production by 17.6%. Cheese futures retreated today on the heels of the Dairy Products report. However, fresh cheese remains tight. CME spot Cheddar blocks climbed 3.75ȼ this week to $1.9925. Barrels surged 13.5ȼ to $1.79. The strength in barrels is at odds with reports that barrels remain abundant. 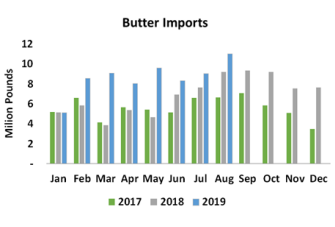 Spot butter rallied 3.75ȼ this week to $2.185. But the futures retreated. Cream is cheap and so is imported butterfat, which is boosting U.S. output and inventories. Butter production totaled 136.4 million pounds in August, up 2.1% from a year ago. The U.S. brought in 11 million pounds of butter in August – the highest volume in more than two decades – and sent just 3.4 million pounds to foreign buyers.

Whey prices continue to slump. Spot whey fell 2ȼ this week to 32.75ȼ. Trading volume was immense, with 80 loads changing hands in Chicago. Driven by higher cheese production, dry whey output surged 7.5% from a year ago to 83.3 million pounds in August. Whey stocks increased 5 million pounds from July to August, but they remained 1.5% below August 2018 levels.

U.S. dry whey exports fell 33.1% year-over-year in August to 30.1 million pounds. Year-to-date whey powder exports have fallen to a 15-year low. China recently exempted U.S. whey permeate from retaliatory tariffs, which could help stabilize U.S. whey product exports. However, the swine herd has shrunk dramatically throughout Southeast Asia due to the spread of African swine fever. Global whey demand could remain anemic until the disease runs its course in the region and hog growers look to rebuild their herds. When they do, they’ll likely be inclined to feed more whey per piglet than they did in the past. But there will be considerably fewer piglets to consume imported whey. 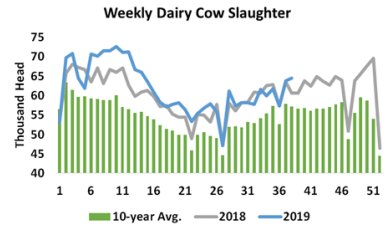 USDA announced the September Class III price at $18.31 per cwt., up 71ȼ from August and up $2.22 from September 2018. This marks the highest Class III price since November 2014. Class IV milk slipped 39ȼ in September. But, at $16.35, it was $1.54 higher than in September 2018. With Class III milk above $18 and forecasted to stay there in October and November, dairy producers are on firmer financial footing. But there is no sign that they will add enough cows to flood the markets with milk and throttle this hard-won pay-price. Judging by slaughter volumes, the U.S. dairy herd is still shrinking. In the week ending September 21, dairy cow slaughter was 64,524 head, up 6.3% from the same week a year ago. This was the highest dairy cow kill ever for this time of year. Year-to-date slaughter is still 3.4% ahead of the already sky-high 2018 pace, and the dairy herd is much smaller. It’s likely to stay that way for a while longer, it seems.

USDA shocked the grain markets this week. In the quarterly Grain Stocks report, the agency sheared its estimates of September 1 corn and soybean stocks to unexpectedly low levels. The lower stocks figures imply stronger demand than USDA has reported in its monthly balance sheets and help to explain why the stubbornly high corn basis has not coaxed farmers to sell more of last year’s crop. Their bins were not as full in reality as they were on paper. The Grain Stocks report propelled the feed markets sharply higher on Monday. The weather forecast helped to sustain the gains. It’s cold and wet in the Corn Belt, which is not conducive for this year’s laggard crop to finish well. December corn closed today at $3.8475 per bushel, up 13.25ȼ from last Friday. November soybeans settled at $9.1625, up more than 30ȼ.

June Dairy Prices – Too Much Milk and Too Much Cheese