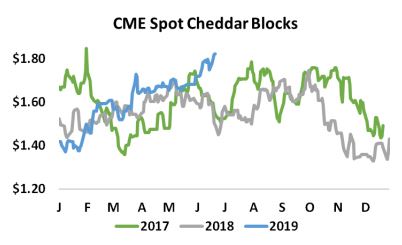 The cheese markets are heating up, and this time barrels are not left out in the cold. CME spot Cheddar barrels jumped 13.25ȼ this week to $1.7375 per pound, within a tick of the 2019 high. Blocks rallied 4.25ȼ from last Friday and closed at $1.825, their highest price since February 2017. Despite a 2ȼ drop in CME spot whey, June Class III futures inched upward, and all other 2019 and 2020 Class III contracts scored new highs. July through December Class III futures now sit comfortably above $17 per cwt. They gained more than 17ȼ on average this week. 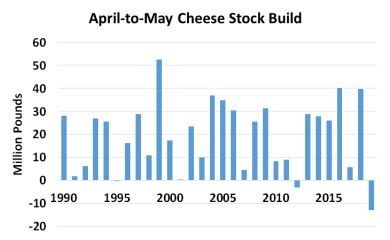 USDA published its Cold Storage report after the close today, and the contents might give the cheese rally a little more oomph when the markets reopen next week. Despite the season, cheese is becoming less plentiful. There were 1.39 billion pounds of cheese in inventory on May 31, up just 0.1% from a year ago and 12.8 million pounds less than on April 30. That is by far the largest April-to-May drawdown on record and only the fourth time cheese stocks have fallen from April to May in more than 100 years of USDA statistics. Inventories of American-style cheese, including Cheddar, have been essentially flat since February, a period in which stocks typically grow substantially. American-style cheese stocks are now 2.4% below year-ago levels.

At just shy of 314 million pounds, butter stocks are 7.2% lower than they were a year ago. The April-to-May stock build was on par with historic volumes. Butter buyers may be getting anxious that butter will be scarce later this year, but foreign butterfat remains relatively inexpensive fornow. 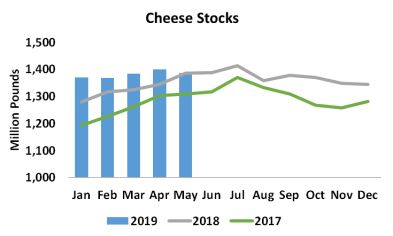 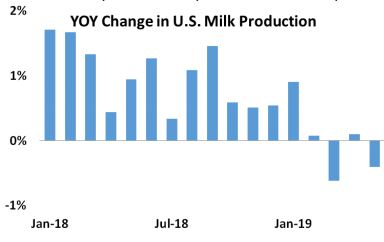 U.S. milk production declined in May to 19.06 billion pounds, down 0.4% from the prior year. The deficit was greater than expected, and the markets rallied in the wake of Tuesday’s Milk Production report. Milk output continues to drop in the Northeast, Southeast, and Midwest, with widening deficits in a few Southwestern states as well. Milk yields are starting to slip in some areas, reducing growth in the Western states. There are 30,000 more cows than there were a year ago in Texas; the Lone Star State boosted milk output by 5.4%, or 61 million pounds. In California, milk output was up 1.3% from a year ago, but there were 7,000 fewer cows than in May 2018. 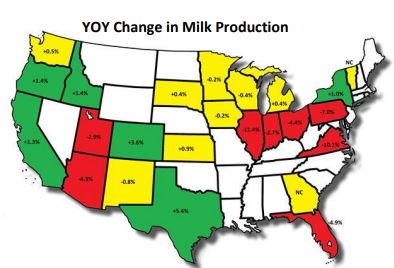 Dairy producers sent 258,100 cows to slaughter in May. That’s 13,000 head, or 5.8%, more than in May 2018 and the largest total for any May on record aside from 1986, the year of the cowkill program. At this rate, the dairy herd is surely shrinking. Nonetheless, USDA reported that the dairy herd averaged 9.333 million head in May, down 89,000 cows from a year ago but 5,000 cows more than in April. The increase is unfathomable. Slaughter volumes remain high, and milk output continues to slow.

Despite lower production in the Midwest and Northeast, milk seems to be widely available. It is June, after all. There are more spot loads moving at a steeper discount than in weeks past. Cheap spot milk has encouraged cheese processors to top up their vats. But demand is growing too. USDA’s Dairy Market News reports that orders from all sectors – “retail accounts, food service, and export” – have been “steady or better than average” despite the recent uptick in prices.

Across the pond, milk output is rising. European milk collections totaled 30.9 billion pounds in April, up 1.3% from a year ago. (This assumes steady production trends in Spain, which has yet to report April data.) That is a noticeably smaller increase than the 1.7% growth logged in March but otherwise represents the greatest year-over-year growth in European milk output since May 2018. European milk collections are up 0.6% for the year to date. Hot, dry weather in northern Europe has brought the flush to an early conclusion, so production is likely to grow at a slower rate in May and June. Modest growth in European milk output is more than offset by steep downturns in Oceania and South America and roughly steady production in the United States. Demand is climbing more quickly than global milk supplies, and the world’s once burdensome dairy product inventories are starting to wane. The dairy markets are likely to remain well supported.

After another wild week on LaSalle Street the grains finished a little lower than they did last Friday. July corn settled at $4.4225 per bushel, down 10.75ȼ. July soybeans closed at $9.0275, up 6ȼ. Fields have dried nicely in much of the Western Corn Belt, but in the Eastern Corn Belt heavy rains continue to frustrate farmers. The market has turned its focus from counting lost acres to tallying the impact of late planting and perpetual clouds on yield potential. Expect extreme volatility as the futures follow the forecast. And remember that the futures tell only part of the story. Local feed prices can be much higher than the benchmark Chicago price.

Investments in rural infrastructure will create job opportunities, improve economy “Throughout American history, our inventiveness and ingenuity have driven the U.S. to be a global leader in innovation and progress. In infrastructure, the basic tangible [Read More …]

“Your decision is looking at a system rather than a price,” was the message from Dana Coale of USDA who led the meeting for producers on April 10 in Clovis, Calif.  The session attracted some [Read More …]