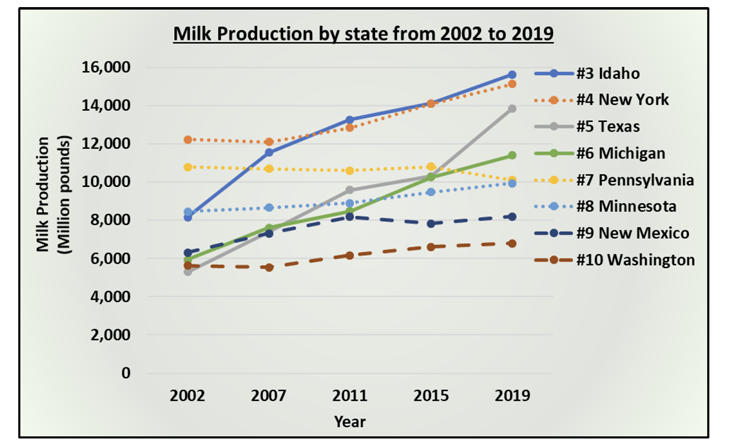 During this time frame, Texas went from being the No. 10 to the No. 5 state in milk production in the U.S. If these trends continue, in the next few years Texas might surpass New York state and become No. 4. In 2019, Texas and New Mexico combined produced 10% of the milk in the U.S. (22 billion of the 218 billion pounds produced in the country) highlighting the economic importance the dairy industry has for this region. Roughly, 80% of the milk production in New Mexico takes place in the East region of the state and a similar proportion of the milk in Texas is produced in the Panhandle. Therefore, combined, the Texas Panhandle and Eastern New Mexico region is one of the biggest milksheds in the country.

Similarly, Idaho and Michigan milk production increased considerably from 2002 to 2019 (91.7% and 91.5% respectively). The only state that showed a decrease in milk production was Pennsylvania. This is explained by the decrease of milk cow inventory in the state (Figure 2) due to longstanding consolidation of the dairy industry combined with several years of low milk prices that led to acceleration of small dairies running out of business in the Midwest.

What was the cause of the increase in milk production in Texas?

The biggest factor driving the increased production was a significant growth of the dairy cow inventory in the state. In 2002, there were roughly 310,000 dairy cows in Texas whereas there are over 580,000 today (almost 90% increase, Figure 2). This increase occurred in the Panhandle area of Texas that had less than 20,000 dairy cows in 2001 and now has over 400,000 dairy cows. This was associated with dairy farmers moving mostly from the West coast of the U.S., but also from other states of the country or regions of Texas, to the Panhandle. 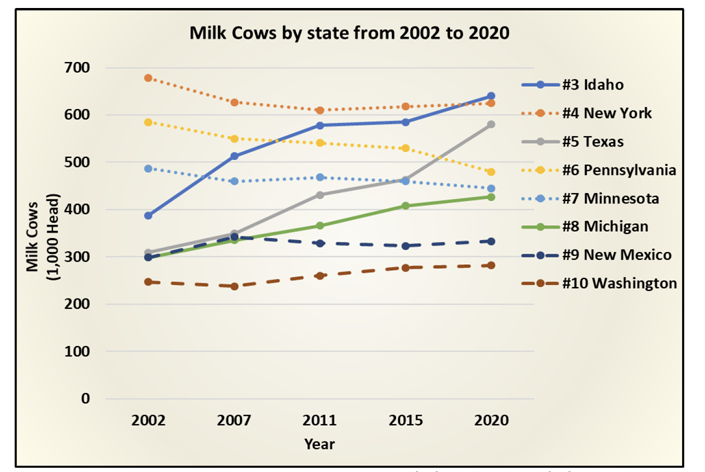 However, increase growth of dairy cow inventory was not the only factor contributing to increase milk production in Texas. Improvements in genetic selection, nutrition, environment, reproduction and management practices have contributed to the increase of milk production.

What are some opportunities for the future?

– Use of precision technologies and automation to facilitate daily tasks, and accurately measure behavioral and production variables to guide managerial decisions intended to improve animal performance and welfare.

– Perform research to improve use of ground water irrigation, digestibility of drought tolerant crops, and nutrient management in dairy operations.

– Continued genetic improvements to decrease disease susceptibility, improve reproductive performance and feed efficiency which will have a positive impact on the environment.

– Provide unbiased, science-based information on agricultural practices and nutritional value of dairy products to build transparency and trust with consumers.

– Educational programs for the youth including field trips to dairies to show daily activities and job opportunities in the industry to engage and encourage them to pursue a career in the dairy industry.

The following is from Lee Mielke, author of a dairy market column known as “Mielke Market Weekly.” The Agriculture Department raised its 2018 and 2019 milk production estimates in the latest World Agricultural Supply and [Read More …]

Combined year-on-year milk supply growth across the Big 7 exporters (the EU, the US, New Zealand, Australia, Brazil, Argentina, and Uruguay) slowed during Q3 2018, as can be read in the latest RaboResearch dairy report [Read More …]

Suit claims 3M Co. should be held liable for damage caused to a New Mexico dairy farm by cancer-causing chemicals that leached into groundwater, a new lawsuit alleges. The owner of Highland Dairy in Clovis, N.M., [Read More …]