The short-term duration of hot weather can have long term ramifications to total milk pounds for the year, components, reproduction, and milk income 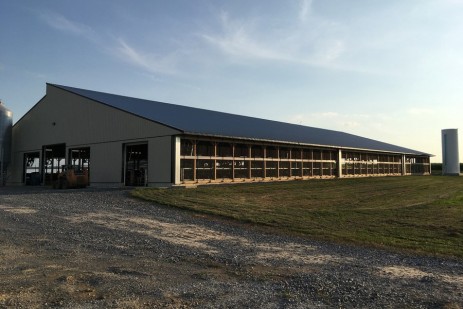 Summer months are a challenging time of year in the northeast when heat and humidity take their toll on animal performance. The short-term duration of hot weather can have long term ramifications to total milk pounds for the year, components, reproduction, and milk income. Even though the pandemic has created turmoil with supply and demand of dairy products, the producer still needs to focus on animal performance and prepare for when markets correct themselves.

Many farms have two key data sources to draw from when evaluating herd performance. These include the monthly milk check and the dairy herd improvement association (DHIA) tests. It should not be a surprise that cows experience some heat stress during the summer months. Managers need to minimize the effects, so milk income is not seriously compromised.

The milk check is the gold standard for capturing production and component results. DHIA provides a snapshot in time per month and does not always accurately reflect what is happening in the herd. Check the test day bulk tank comparison against the test day information on the DHIA 202 summary report before examining production and component data. If there is greater than a five percent deviation, then production data may require careful interpretation.

Ideally taking the bulk tank milk weights at each pick-up along with the number of cows going into the tank is a more accurate approach to monitoring production. This can detect problems earlier and allow for faster solutions to correct heat stress. A 200-dairy cow operation with minimal heat abatement strategies was evaluated using their 2019 information. They averaged 77 pounds of milk from January through May. From June through September the herd dropped in milk for an average production of 70 pounds with similar days in milk. The milk price/cwt averaged $18.83 for those 4 summer months. The potential lost revenue due to heat stress equated to approximately $34,000. This number does not consider the long-term physical stress to the animal at various stages of lactation and the impact on reproduction. Investments in fans, a sprinkling system, or other cow comfort strategies would pay for themselves in a short period.

Using the same 200-cow dairy, the monthly milk checks from June through September were compared to the DHIA summary report (Table 1) for components. Milk fat more than milk protein had an opportunity for improvement. Using the price of milk fat and protein pounds from the Federal Milk Order #1 report for June through September, the difference in lost revenue was calculated. If the farm had produced the amount of fat and protein reported on test day, the herd would have averaged $0.33/cwt more on their milk price compared to what they received. For those 4 months, an additional $6400 was not realized. Using the milk check information to document heat stress provided a better assessment of what was happening in this herd.

Table 1. The component differences between the milk check and DHIA test day average for a 200-cow dairy.

Heat abatement strategies that help cool cows during difficult times of the summer can be instrumental in minimizing production losses. Herds that do not have well-ventilated facilities can experience both production and component reductions during the summer and well into the fall. The monetary impact that heat stress has on an operation can be significant. If DHIA test day data matches with the milk check, then drilling down further into various performance areas can be beneficial. If there is too much discrepancy between the milk check and DHIA, then it may be more difficult to determine the specific production group(s) causing the problem.

Monitoring must include an economic component to determine if a management strategy is working or not. For the lactating cows, income over feed cost is a good way to check that feed costs are in line with the level of milk production. Starting with July 2014’s milk price, income over feed cost was calculated using average intake and production for the last six years from the Penn State dairy herd. The ration contained 63% forage consisting of corn silage, haylage, and hay. The concentrate portion included corn grain, candy meal, sugar, canola meal, roasted soybeans, Optigen, and a mineral vitamin mix. All market prices were used. 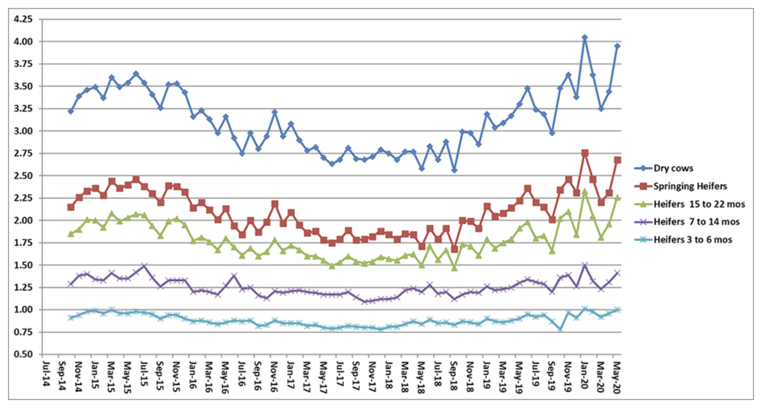 With hot weather, the main concern is often loss of milk production, but heat stress can also cause cows to experience a seasonal high SCC as well. Many dairy producers experience an increase in their [Read More …]

Dairy Revenue Protection (Dairy RP) is a program that will allow dairy producers to purchase crop insurance protection on milk income. The program will allow you to lock in a guaranteed revenue based on futures [Read More …]