There was a lot of red on LaSalle Street this Valentine’s Day. The powders were particularly weak, as fears of coronavirus sickened the markets most sensitive to Chinese consumption. CME spot dry whey spent much of the 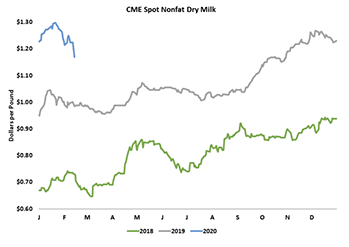 Both Class III and Class IV futures suffered steep losses. February and March Class III contracts settled within a penny of $17 per cwt., and first-half Class IV contracts finished well below that mark. Further down the board, the promise of $18 Class IV milk has vanished. February through December Class III futures settled at an average of $17.39, while Class IV averaged $16.91. 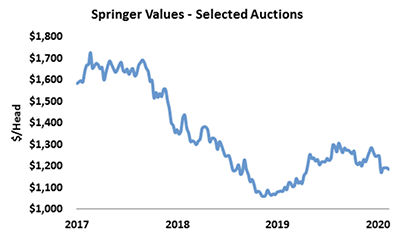 Dairy producers can live with those prices, but they are certainly uninspiring, especially after several years ofhardship. Cull rates, auction dockets, and springer values continue to reflect 1716 Hidden Creek Court P 314.821.4456 E info@jacoby.com Suite 200, St. Louis MO 63131 pain on the farm. In the first five weeks of this year, dairy slaughter volumes are 1.4% ahead of the 2018 pace and 1.8% higher than the same period in 2019. If dairy producers are culling at this rate, either the national herd is shrinking, or there are a lot of new heifers in the barn. The price of high-quality springers is hovering around $1,200 per head. That’s about $200 better than at this point last year, but it does not signal much appetite for expansion.

Nonetheless, there is plenty of milk around. It’s cold in the Midwest at the moment, but the cows are well housed and conditions are benign in comparison to the violent storms that rocked the region a year ago. Dairy Market News reports that “milk and cream are widely available regardless of feed quality and regardless of the mass exodus of dairy farmers in the Upper Midwest.” Those factors have obviously reduced output relative to what might have been, but milk is by no means short. In the rest of the country, milk yields are rising as the spring flush nears. Processors in Idaho have more than they can handle and dairy producers will have to absorb some steep discounts due to the excess. 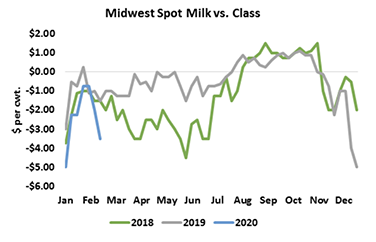 Cheap spot milk is surely boosting barrel output. Dairy Market News explains the still-vast block-barrel spread: “Heavy milk flows are resulting in manufacturers running as much milk through the vats as they can… Offers for barrels and [640 lb. blocks] are common. However, processors relay that retail demand has been solid enough so that stocks of some block cheese brands are highly committed for the next few months. Prices for blocks are supported by this demand, while prices are weaker for barrel cheese.”

Cream remains cheap, and butter churns are running hard. Butter makers are boosting supplies in anticipation of Easter and Passover demand, but they are doing so with caution rather than enthusiasm until sales are confirmed. Butter values have fallen far enough to make imports less attractive, which could slow the spring inventory build at the margins. However, the strong dollar undermines

the limited support this might offer. The dollar climbed to a nearly threeyear high against the euro. While German and Dutch butter prices held steady this week, they dropped nearly 2ȼ per pound after converting from euros to dollars.

The currency impact surely weighed on the milk powder market as well. NDM futures struggled all week. But the heaviest losses came Thursday and Friday, after the Chinese government dramatically boosted its coronavirus infection counts. The much higher totals reflect a change in the method to officially recognize an infection, and not a sudden increase in the ranks of the sick. But the headlines added to justifiable fears that efforts to contain the epidemic will reduce Chinese demand for goods of all sorts. With much of the workforce staying home until the panic abates, China’s ports are clogged with ships waiting to unload, and domestic freight has been throttled by a lack of drivers and a web of quarantines and checkpoints. That is surely slowing the flow of goods to consumers and reducing demand. 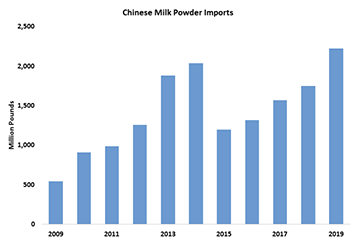 But while tens of thousands of people in China are sick, billions are healthy, and everyone has to eat. China is acutely short of protein after African swine fever devastated its swine herd, but, judging by the massive volume of imports last year, they likely have plenty of milk powder. As issues up and down the supply chain make fresh, perishable food more difficult to attain, it’s reasonable to expect that milk powder will satisfy a larger share of consumers’ appetites. However, for the same reasons a greater share of China’s domestic milk supply is likely to be dried, displacing some demand for imported milk powder. Chinese milk powder imports are likely to slow due to the virus, but it’s possible that much of the demand will be pent up rather than lost altogether. However, markets abhor uncertainty. Traders are selling now and will assess the damage later. 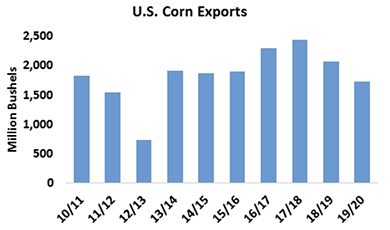 The corn markets retreated this week. The dollar is strong while the peso and the real are exceptionally weak. Importers are sure to favor crops from South America, and by all reports there will be a big harvest in the Southern Hemisphere. U.S. corn exports are disappointingly slow, and on Tuesday USDA once again lowered its projection for corn shipments this season. The agency raised its soybean export estimate, acknowledging that the U.S.-China trade pact is likely to boost sales. March corn settled at $3.7775 per bushel, down 5.75ȼ from last Friday. March soybeans climbed 11.75ȼ to $8.9375.

Dairy Markets Are Fixated on the Spread of Coronavirus

The T.C. Jacoby Weekly Market Report Week ending March 6, 2020     The dairy markets sprinted out of the gate on Monday, but they couldn’t sustain such an energetic pace. They managed to cross [Read More …]