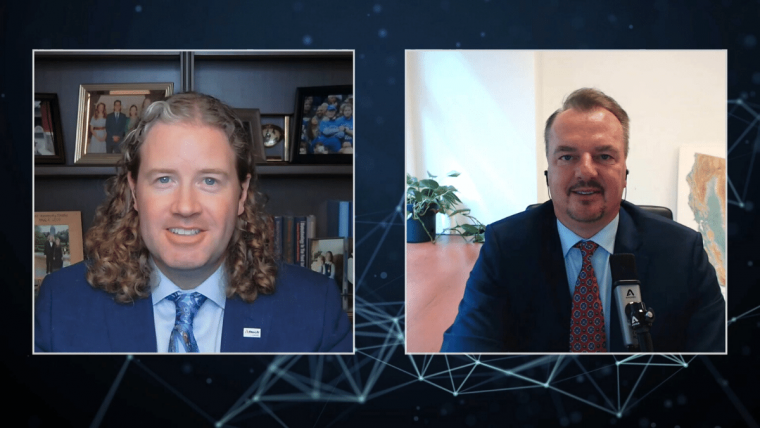 During a keynote presentation for the Alltech ONE Virtual Experience, Dr. Frank Mitloehner, professor at the University of California, Davis and air quality specialist, boldly proclaimed a path for animal agriculture to become climate-neutral.

Yes, “you heard me right — climate-neutral,” said Dr. Mitloehner. He said he would like to, “get us to a place where we have the impacts of animal agriculture that are not detrimental to our climate.”

Myth #1: Methane (the most common greenhouse gas, or GHG, in animal agriculture) acts just like other GHGs in the environment.

Fact: The three main greenhouse gases, carbon dioxide, methane and nitrous oxide, all impact the environment in critically different ways, especially as it relates to their source, life span in the atmosphere and global warming potential.

What causes these gases in the first place? Carbon dioxide is created by the burning of fossil fuels. Fossil fuels are used as the energy source to power most homes, vehicles and industry globally. As the graph below depicts, Dr. Mitloehner refers to stock gases like carbon dioxide as a “one-way street” because they only accumulate in the environment over time due to their long lifespan. 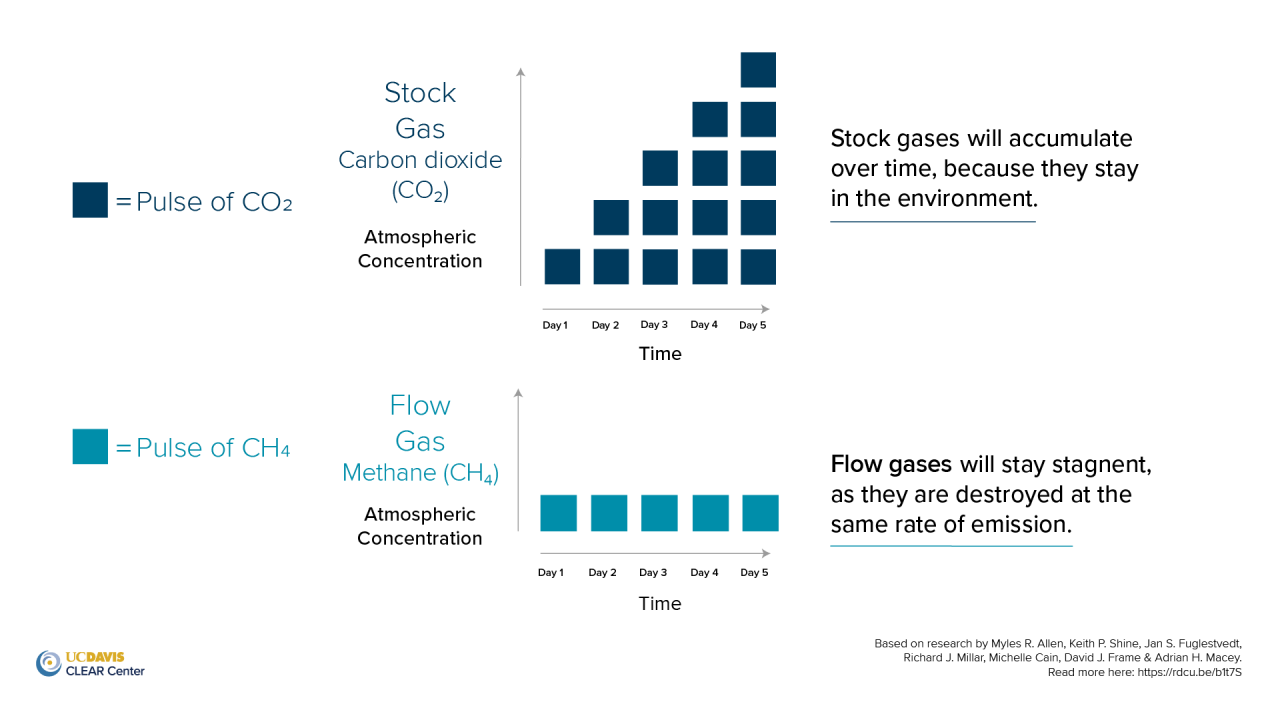 Methane can be produced in a variety of methods, but most commonly, it’s produced through the rumination process in beef and dairy livestock (i.e., belching). As a short-lived flow gas, “The only time that you really add new additional methane

to the atmosphere with the livestock herd is throughout the first 10 years of its existence or if you increase your herd sizes,” explained Dr. Mitloehner. Methane levels do not increase if herd sizes remain constant because methane is being broken down at the same rate it is being produced.

“What I’m saying here by no means (is) that methane doesn’t matter,” he continued. “While that methane is in the atmosphere, it is heat-trapping, it is a potent greenhouse gas. But the question really is, do our livestock herds add to additional methane, meaning additional carbon in the atmosphere, leading to additional warming? And the answer to that question is no. As long as we have constant herds or even decreasing herds, we are not adding additional methane, and hence not additional warming. And what I just said to you is a total change in the narrative around livestock.”

Alternatively, carbon dioxide is created from extracting fossil fuels that are millions of years old and are trapped under the Earth’s surface.

“These long-lived climate pollutants are only emitted,” said Dr. Mitloehner. “They are put into the atmosphere, but there’s no real sink for it in a major way.” 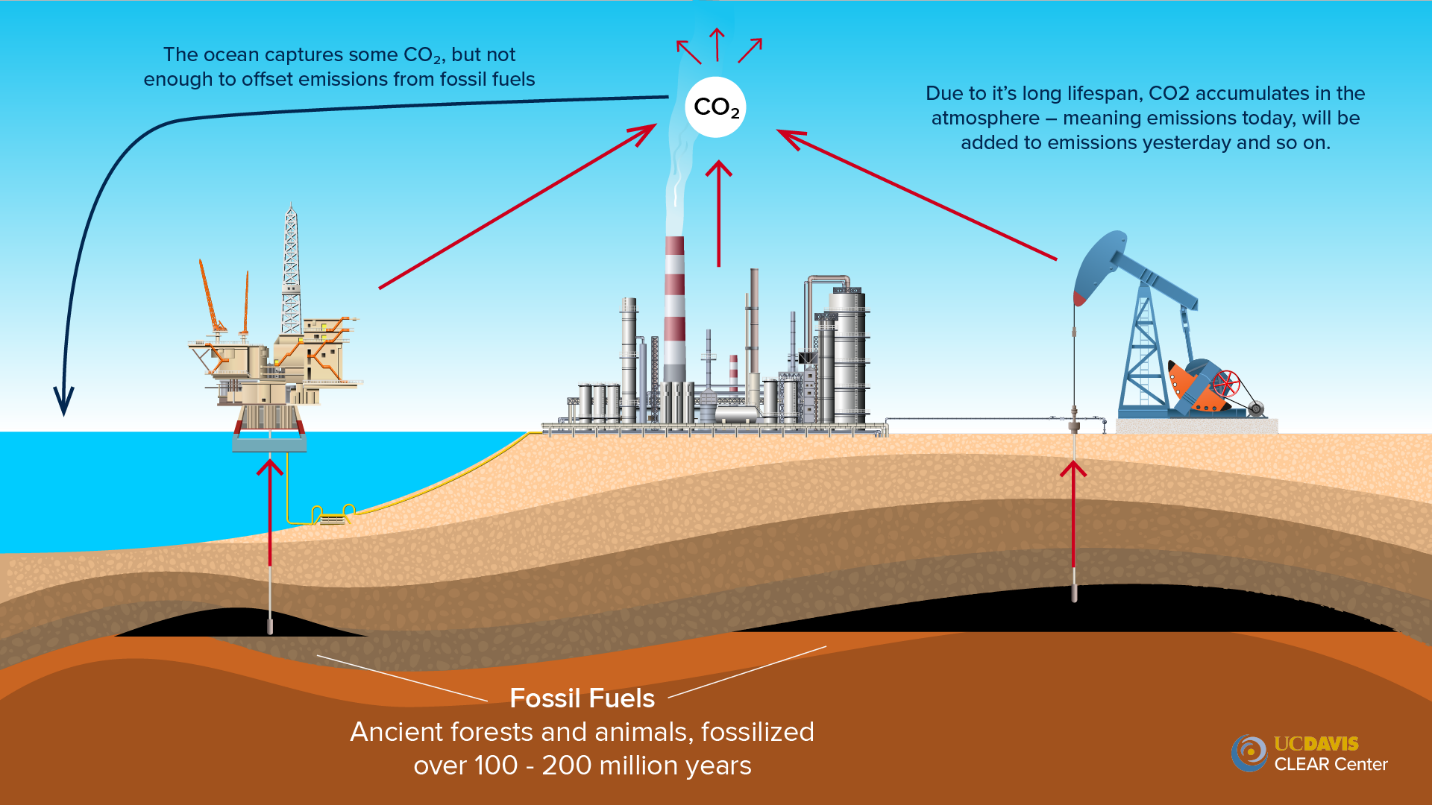 This demonstrates that carbon dioxide and methane are very different types of gases (stock versus flow) and have very different lifespans in the environment (1,000 years versus 10 years), but what about their global warming potential?

Myth #2: The current method for assessing the global warming potential (GWP100) of greenhouse gases properly accounts for all important variables.

Fact: The initial method for calculating GWP100 misrepresents the impact of short-lived flow gases, like methane, on future warming. The new “GWP*” is an improved and more representative measurement.

The initial GWP100 measures produced by the Kyoto Protocol nearly 30 years ago marked a very positive step for assessing global warming. The initial documents included many footnotes and caveats to account for variability and unknown values. “But the footnotes were cut off, and people ran with (it),” said Dr. Mitloehner. “And in my opinion, that was a very dangerous situation that has really gotten animal agriculture into a lot of trouble, actually, quite frankly.”

Unfortunately, this type of calculation completely omits the fact that flow gases, like methane, are destroyed after approximately 10 years and would not continue for the entire 100-year duration as described in the GWP100 formula. Additionally, it underestimates the impact that stock gases, like carbon dioxide, would have that persist in the environment for 1,000 years.

Dr. Mitloehner cited Dr. Myles Allen from Oxford University as the pioneer of a new calculation called “GWP*.” The new GWP* calculation better accounts for both gas intensity and gas lifespan in the atmosphere in its measurements of global warming. This is a new narrative to explain global warming emissions and, Dr. Mitloehner said, “you will see it will gain momentum, and it will become the new reality” soon.

Myth #3: To keep up with increasing demand and global population growth, the United States has continued to increase its numbers of beef and dairy cattle, thus increase methane emissions.

Fact: The United States reached peak beef and dairy cattle numbers in the 1970s and has reduced its number of animals every decade since, resulting in 50 million fewer cattle in total.

Over the last half-century, the United States has made tremendous progress to improve efficiency and increase productivity while also reducing total beef and dairy cattle numbers. For example, in 1950, the U.S. dairy cow herd peaked at 25 million cattle. Today, the dairy herd is approximately 9 million cows, yet it is producing 60% more milk — that’s significantly more milk with 14 million fewer cows!

Though cattle numbers have continued to increase in countries such as India and China, this means the United States has not increased methane output — thus not increasing GHG contributions from livestock — over the last five decades.

So, what does all this mean?

Animal agriculture, unlike any other sector, can not only reduce its GHG output, but can also create a net cooling effect on the atmosphere (i.e., actively reduce global warming).

“But now, the thing that really excites me, and that’s the third scenario,” said Dr. Mitloehner. “So, imagine this scenario here, where we decrease methane by 35%. If we do so, then we actively take carbon out of the atmosphere. And that has a net cooling effect. If we find ways to reduce methane, then we counteract other sectors of societies that do contribute ― and significantly so ― to global warming, such as flying, driving, running air conditioners and so on.” 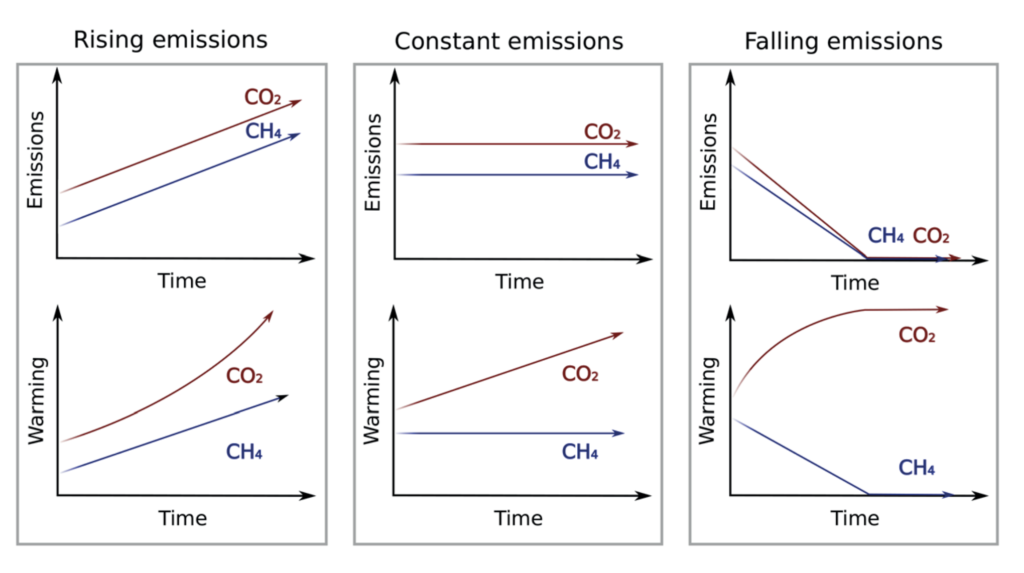 Examples of Dr. Mitloehner’s 35% reduction scenario have proven to be possible. Over the last five years alone, California has reduced methane emissions by 25% via a combination of improved efficiency and incentives for anaerobic digesters, alternative manure management practices and other technologies.

Though the narrative on animal agriculture has been negative on climate change, there is now increasing hope and new data to debunk even the most long-standing criticisms.

The New York Animal Agriculture Coalition is proud to present ALL-STAR ADVOCATES, a new and exciting opportunity to enhance your ag-vocacy skills. If you’re a passionate dairy farmer or advocate for the dairy industry in New York [Read More …]

The survey is open to women and men working in any sector of the food supply chain Alltech believes that inclusion cultivates creativity and drives innovation. Gender equality is not only a fundamental human right, [Read More …]