U.S. and Chinese Negotiators End This Week’s Talks With No Deal 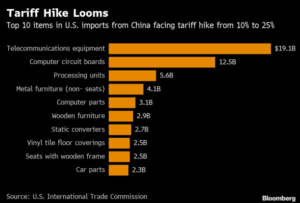 Trade talks ended on Friday with no deal other than a commitment to continue to talk.

President Trump said that he would give China a month before he imposed an additional tariff on a new “List 4” of the remaining Chinese imports valued at $ 325 billion.

The MBS team will be doing outreach on an exclusion process for list 3 that had been promised if the tariffs were increased from 10% to 25% and noted in the federal register notice increasing the tariffs.

USTR Notice Tariffs $200b of China Goods Now in Effect


A final notice submitted by USTR to the Federal Register on Thursday was implemented on $200 billion of Chinese imports increasing them from 10% to 25% from 10%. .

A few points to highlight from the draft notice:

On Thursday, President Trump said that he had received a letter from President Xi Jinping and that he would likely be talking to him and that a deal could still be reached. It has not been reported that any call has taken place. He also announced that he had staff working on an additional tariff on remaining Chinese imports of approximately $325 billion, a so-called list 4.

Also on Thursday, Chinese Vice Premier Liu He arrived from China and met with U.S. Trade Representative Robert Lighthizer at the USTR office where they talked for about 90 minutes. After that he dined with Treasury Secretary Steven Mnuchin and Ambassador Lighthizer. They didn’t respond to a question about how the talks were going. While talks are set to resume Friday, it isn’t clear there will be any meaningful breakthroughs.

China announced early Friday morning that they would retaliate against the U.S. but that they were will to continue to talk. China could raise the retaliatory tariffs already in place on American goods imposed last fall. When President Trump imposed his 10 percent tariffs, China responded by imposing its own additional tariffs on $60 billion of American goods. The tariffs ranged from 5 percent to 25 percent. That covered about two-fifths of Chinese imports from the United States. Agriculture would feel the greatest impact of such retaliation. The U.S. exports so much less from China than we import from them, that they have much less of a hammer than does the U.S.


Over the weekend, a new Chinese draft of the agreement deleted commitments on core issues that the U.S. had considered closed. Ambassador Lighthizer briefed President Trump which led to President Trump’s tweets on Sunday stating that China had reneged on the negotiations and threatening an increase in the tariff rate.

Our MBS Trade Team will continue to monitor this pressing issue, and will send more alerts on the official notice and the exclusion process as the situation develops. 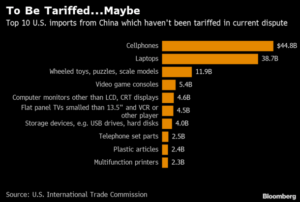 Dairying: not all doom and gloom

The food & agribusiness sector in China will continue to be volatile in 2019, according to the just-released RaboResearch China F&A Outlook 2019. “Urbanisation and rural upgrading are still providing a base for growth in [Read More …]