U.S. dairy exporters topped year-earlier levels for the seventh straight month in March, despite disruptions resulting from the coronavirus outbreak. 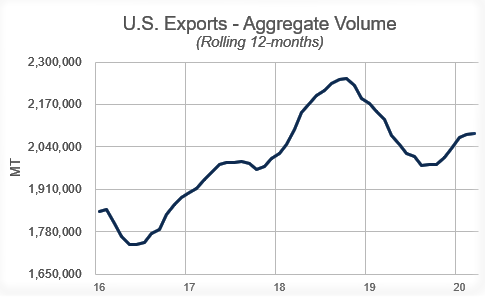 Southeast Asia continues to be the main source of growth for U.S. suppliers. Shipments of SMP, WMP, whey, lactose and cheese were a record-high 49,729 tons in March, up 10%. Export value was just shy of $120 million, up 33% and the best month in more than five years. In the first quarter, the value of U.S. exports to the region were up 54% from a year ago (all Q1 percentages adjusted for leap day), led by a 40% increase in SMP sales and a 27% gain in cheese volume. 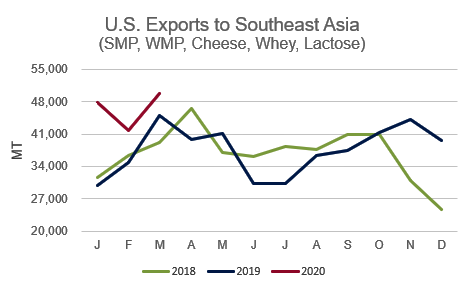 The value of exports to South America and the Middle East/North Africa (MENA) region also was higher in March, and sales to the Caribbean (led by the Dominican Republic) reached a record high.

In all, NDM/SMP exports were 62,346 tons, up 4%. In addition to stronger sales to Indonesia and Malaysia, shipments to the MENA region were the most since July 2014 and suppliers grew sales to Colombia. These gains were partially offset by a 19% drop in volume to Mexico, which saw the lightest volume (daily-average basis) since January 2018. 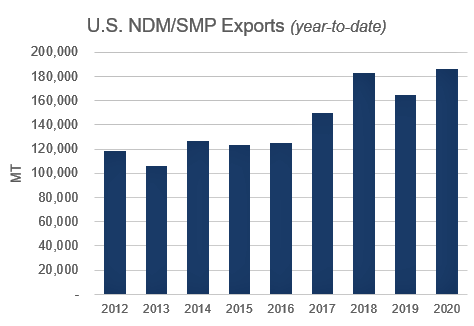 Whey volumes continued to improve, posting a 7% gain. Volume of 44,380 tons was the highest in 19 months. The recovery in sales to China was noteworthy, with shipments reaching 12,793 tons, up 17%. In the first quarter, U.S. whey exports to China were up 21%. In March, shipments to Canada, Japan and New Zealand also were higher, while sales to Mexico were lower.

Higher-protein whey products fared well in the first quarter, with WPC up 24% and whey protein isolate (WPI) up 30%.

Meanwhile, total cheese exports were 33,356 tons in March, the most in 10 months, but down 10% from last March’s record volume. Sales to Mexico and Australia were higher than last year, but shipments to South Korea, Japan and the MENA region continued to lag.

Lactose exports were 32,634 tons, down 8% from last year but in line with volume from the previous five months. Sales to China, Mexico and Southeast Asia trailed year-ago levels.

Shipments of milk protein concentrate were 5,550 tons, up 63% and the best month in almost six years. Most of the increase came from North Africa, which accounted for nearly half the sales.

Exports of food preps (blends) were 6,431 tons, up 46% and the most in more than two years. Volume was led by record sales to Canada.

Aspen Pharmacare is in talks to sell its global infant formula business, it said on Tuesday, as the South African drug maker seeks to cash in on growing demand for baby milk. The business sells [Read More …]

Pandemics are scary. Our thoughts (helped tremendously by the media) quickly go to worst case scenarios. The new virus is always “something we’ve never seen before” and the threat of spreading it globally is always [Read More …]