Over the full 12 months of 2019, total U.S. dairy exports hit $6 billion, up 8% compared to the previous year. Value has increased 25% over the last three years.

U.S. dairy exports were positive in December, continuing a rebound over the last third of 2019.

During December, suppliers moved growing volumes of nonfat dry milk/skim milk powder (NDM/SMP) to Southeast Asia in particular, while overall shipments of whey products topped year-ago levels for the first time in 16 months. Lactose exports exceeded the depressed levels of 2018. Like NDM/SMP, interest was strong from Southeast Asia on both whey and lactose. Among the four major export categories, only cheese slipped back in December.

Among December’s other highlights:

U.S. suppliers shipped 179,382 tons of milk powders, cheese, whey products, lactose and butterfat during the month, 14% more than the year before. On a solids basis, total dairy exports were up 16%. The value of all exports was $523.3 million, up 22%. 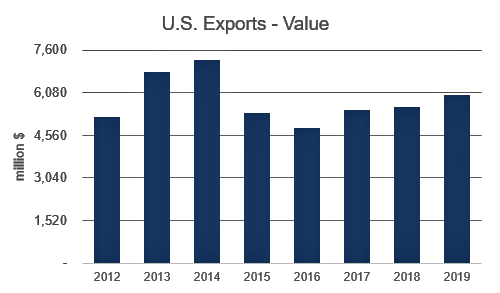 Total volume of milk powders, cheese, whey products, lactose and butterfat in 2019 was 2,035,131 tons, down 7% from 2018. Much of the decline is attributed to lost sales of whey and lactose in China due to retaliatory tariffs and African Swine Fever, plus slower shipments of NDM/SMP in the first eight months of the year as U.S. suppliers struggled to compete with aggressive EU clearance of intervention stocks. 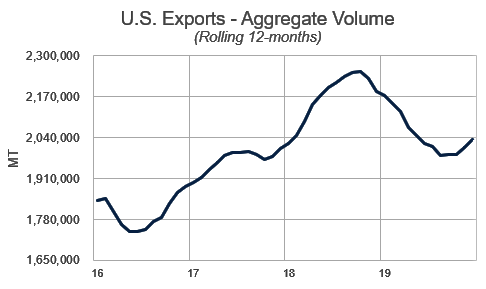 U.S. suppliers shipped 700,930 tons of NDM/SMP in 2019, down 2% from the record level of 2018. Sales improved markedly starting in September, once EU intervention stocks were cleared through the supply chain. Volume was up 29% in the last four months of the year. From September-December, exports to Southeast Asia were up 58%, as shipments to Indonesia and Vietnam more than doubled. For the full year, exports to Southeast Asia were a record high 227,331 tons (+6%). 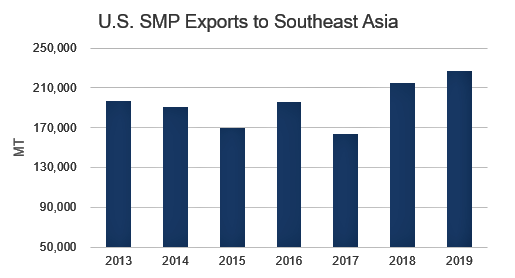 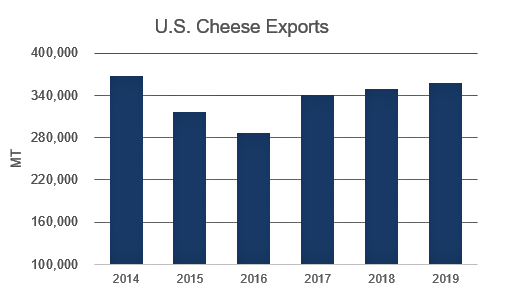 By Alan Levitt Gains in milk powder to Southeast Asia and Mexico offset losses in whey to China and cheese to Mexico. U.S. dairy exports tracked higher than year-ago levels in the third quarter, despite continued [Read More …]