A dairy cooperative in the U.K. is turning cow manure from their own farms into biogas that fuels two of their milk delivery trucks. 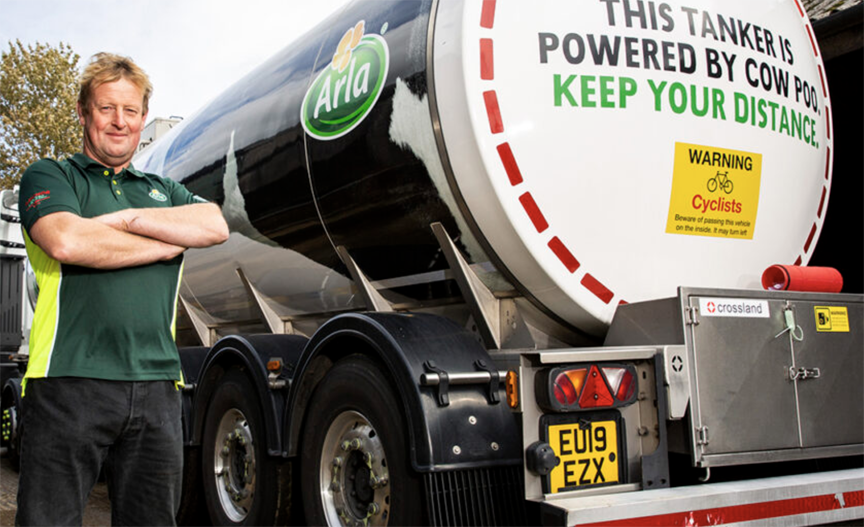 To implement the poo-powered truck concept, the farmers are collecting manure slurry from two neighboring dairy farms in Buckinghamshire, a county northwest of London.

The farms then truck that manure to a nearby anaerobic waste digester that captures the methane produced from manure (and other locally-derived waste products) and converts it into climate-friendly renewable gas.

Arla Foods — a U.K. and European-based dairy cooperative with more than 9,000 dairy farm members — then invested in two biogas-converted milk delivery trucks that collect milk from the participating farms. The trucks are powered by biogas derived, in part, from manure produced by the same cows that gave the milk. 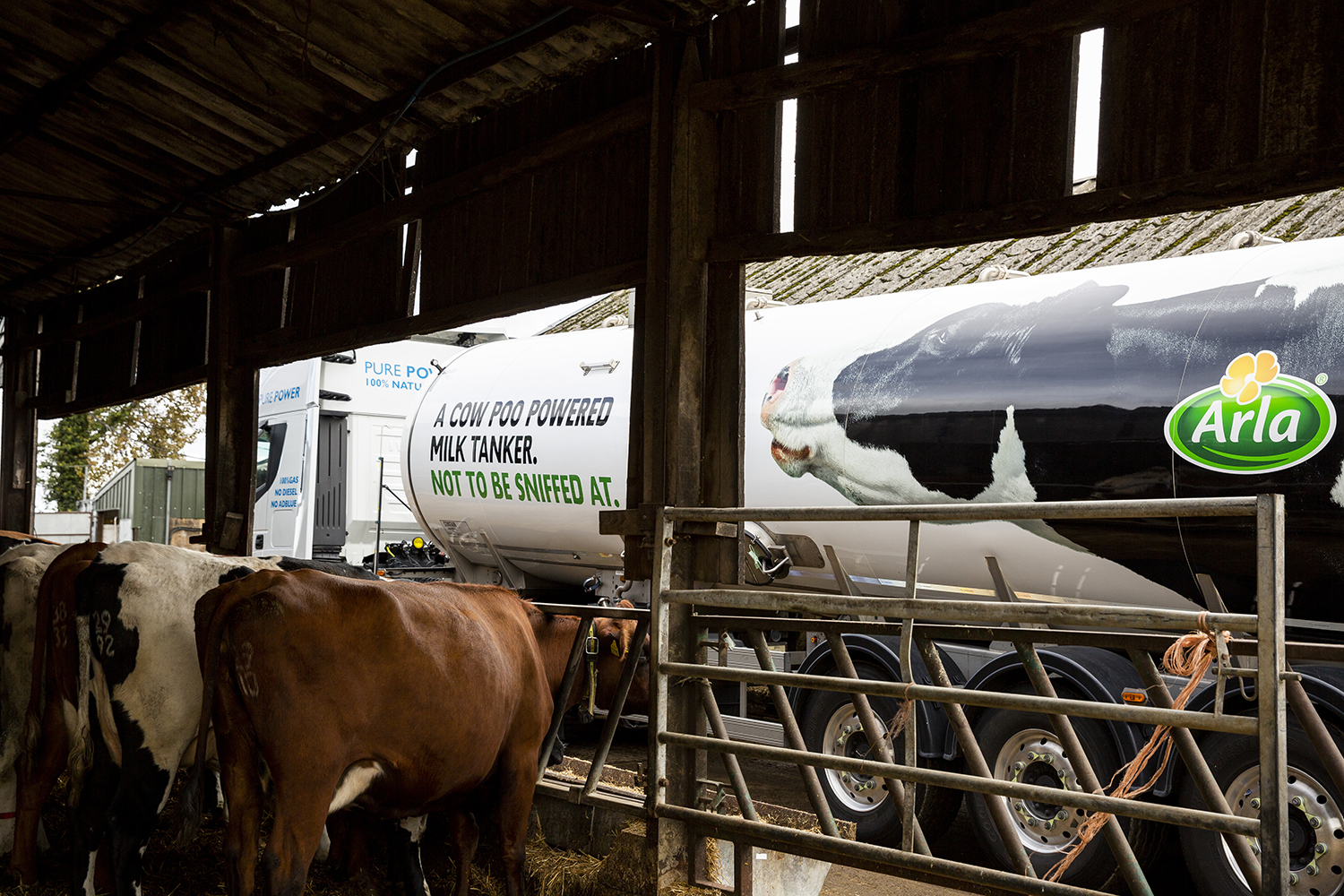 The milk trucks are powered by manure from some of the same cows producing the milk. Photo credit: James Robinson | Arla Foods

RNG, or biogas, is produced by capturing methane emissions in anaerobic digesters from the decomposition of organic waste, including food, sewage and manure.

Arla Foods has invested in their RNG project as part of their pledge to reduce the cooperative’s total carbon emissions by 30 percent between 2015 and 2030, reaching carbon net-zero by 2050.

Globally, according to Our World In Data, livestock production adds 5.8% of the annual greenhouse gas emissions contributing to climate change.

Beef and dairy cattle contribute the lion’s share (65%) of global livestock’s emissions, according to the Food and Agriculture Organization of the United Nations, primarily through production of methane, a potent greenhouse gas, via their burps and manure.

Chevron USA announced last October a joint venture project with Brightmark LLC to invest in infrastructure that supports dairy biomethane projects in multiple U.S. states. The company committed to purchasing the RNG produced from the projects for use in vehicles. 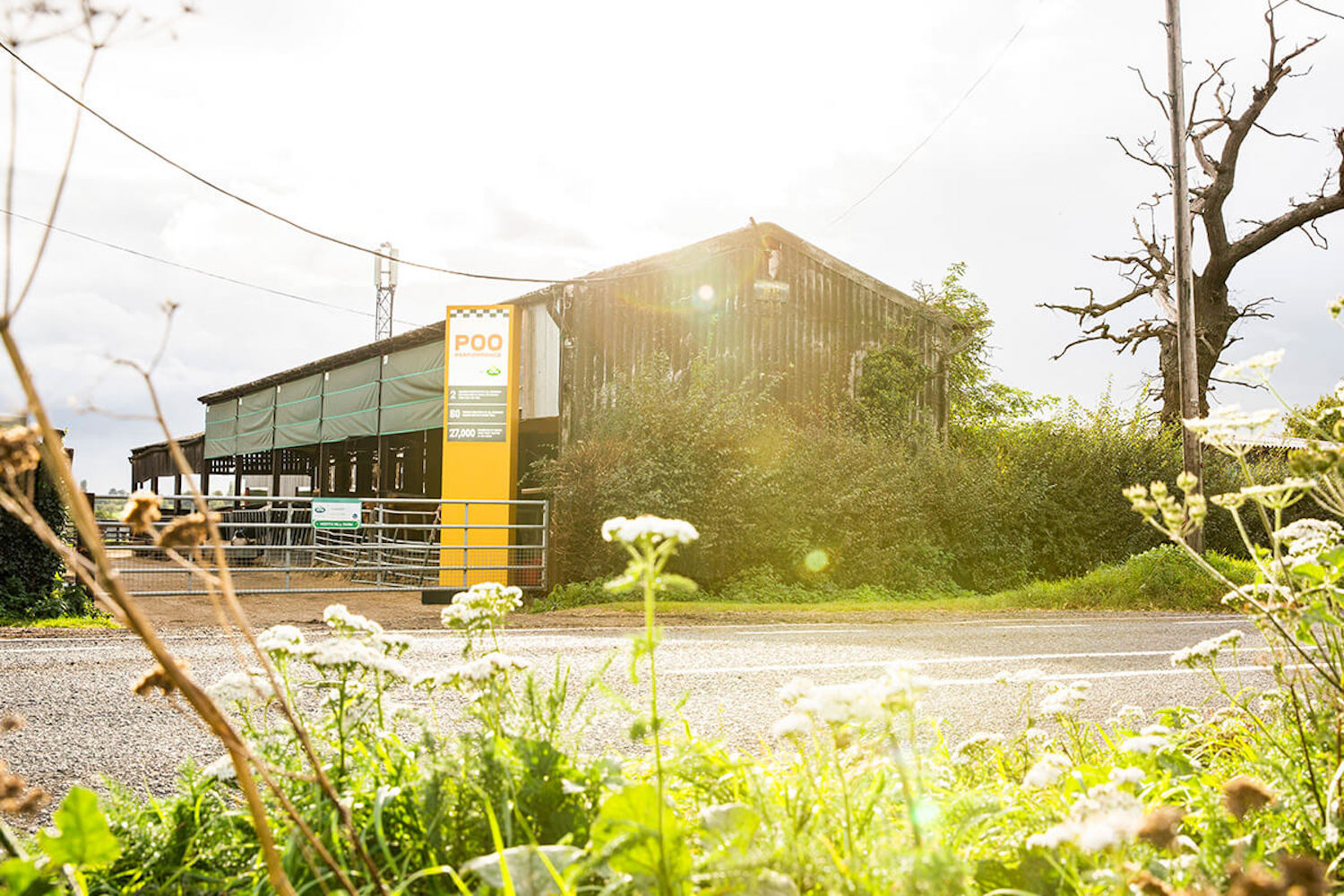 The poo-powered milk truck pilot project aims to optimize use of what is otherwise considered a waste product — while improving their environmental impact. Photo credit: James Robinson | Arla Foods

This growing interest from transportation companies has created a win-win opportunity for dairy farms and other livestock sectors to pursue biomethane digesters as an affordable and eco-friendly way to manage their manure, says Daniel Bresette, Executive Director of EESI, a D.C.-based bipartisan group of Congressional members working to advance science-based solutions for climate change, energy and environmental challenges.

Most of the interest to date in the U.S.-based biomethane digesters has been focused on larger farm operations, Bresette says, making the Arla Foods example using small farms an interesting model.

One of the participating farms is only milking 150 cows, according to Wilkinson, and on average Arla Foods’ farm members are small, milking between 96 and 250 cows.

In the U.S., around 248 farms are currently running anaerobic digesters, according to the EPA AgSTAR program (a joint collaboration between the EPA and USDA).

The Daily Churn reported on one new biomethane digester at a 5000-cow dairy farm in Central Washington state.

That project is expected to convert 150,000 gallons of daily dairy manure into about 160,000 million Btu’s of RNG for vehicles — the equivalent of about 1.4 million gallons of gasoline a year.

And there’s evidence we’ll see more of these. The EPA estimates that biogas recovery systems are technically feasible at an additional 8,000 large-scale dairy and hog operations across the country.

Back in the U.K., Wilkinson says Arla Foods’ farmers are eager to try out new ideas that improve their sustainability and business models.

“When we say, ‘We’ve got this crazy idea, would you mind helping us?’, he says “(the farms) are more than happy to help us out.”

Though the three-month trial is preliminary, and the biogas-converted milk trucks were, admittedly, expensive, Arla Foods is hopeful the model can be expanded. 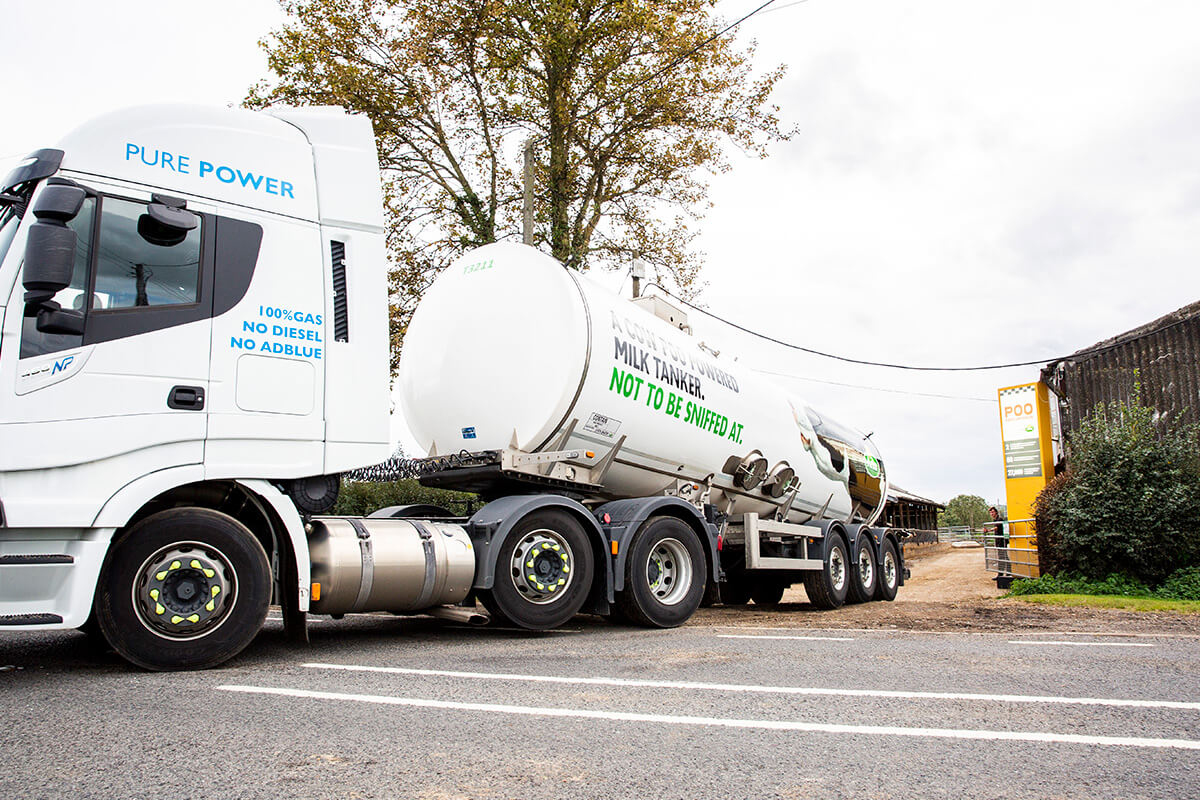 They are banking on the relatively close proximity of many of their member dairy farms to a growing network of U.K.-based anaerobic waste digesters, according to Wilkinson, as well as public and private partnerships to expand the opportunity to more of their members.

“The opportunity to scale up is definitely there,” he says, noting they have 2400 dairy members in the U.K. “We’ve got farms from Scotland all the way down to Cornwall.”

Geography provides more of a challenge for implementing a similar-style operation in the U.S., Bresette says, but if more digesters are built there could be regional opportunities similar to what Arla Foods is experimenting with—a potential boon for small dairy farms and regional economies.

“Economics for small dairy operations are really difficult to pencil out,” he says. “If there was a biogas economy providing another source of revenue, maybe it can help (small dairy farms) operate more sustainably.”

EESI also sees a biogas economy as a potential way to add U.S.-based jobs, especially in rural communities where large-scale, biomethane anaerobic digesters linked into natural gas pipelines would be likely to be built.

An expanded investment in up to 13,500 U.S.-based biogas facilities could be a boost for rural economies, according to an EESI release. This would add $40 billion in capital investment, 335,000 short-term construction jobs and 23,000 permanent jobs.

The incoming Biden administration — which has pledged to invest $400 billion in clean energy and innovation —  offers a chance for a “fresh start with some of these (renewable energy) policy proposals,” says Bressette, who hopes that will include investments in biogas facilities.

As for Arla Foods farmers, the manure-fueled truck project not only reduces their environmental impact, but also offers a fun way to communicate their commitment to planet-friendly dairy farming.

Each truck is wrapped with bold proclamations. On the side, a black and white Holstein cow is featured next to the words, “A Cow Poo Powered Milk Tank. Not To Be Sniffed At.” And drivers following the tankers are warned, “This tanker is powered by cow poo – KEEP YOUR DISTANCE.”

“It’s a little bit quirky, ‘trucks powered by poo,’” Wilkinson admits, “but you capture the imagination of consumers in the right way and you can present farming and farmers in a very positive light.”

This article originally appears at https://www.darigold.com/uk-dairy-cooperative-is-using-manure-to-power-their-milk-trucks/

GEA announces the North American launch of its STR Series Manure Semi-Tanker, the latest addition to the GEA range of manure management equipment. The STR Semi-Tanker is designed to make manure transportation quicker and easier by [Read More …]

Governor Wolf has authorized temporary suspension of certain manure and waste land application regulations through June 1, 2020 As the COVID-19 emergency continues to evolve milk dumping has become a reality for some dairies. In [Read More …]