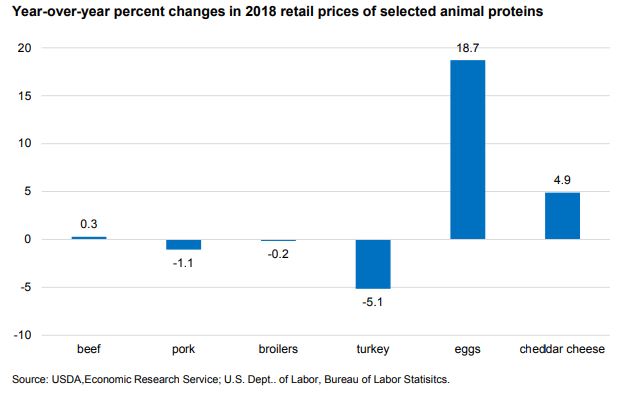 Most global dairy product prices rose from December to January. Tighter milk supplies among some major dairy exporters likely contributed to the higher prices. For the top four global dairy exporters combined (New Zealand, the EU, the United States, and Australia), November milk production was 216 million pounds below November 2017. For the United States, November milk production was 17.370 billion pounds, a modest 0.6 percent above November 2017. With higher expected international prices, export forecasts for 2019 have been raised on both the milk-fat and skimsolids milk-equivalent bases. The all-milk price forecast is $16.90-$17.60 per cwt, an increase from $16.40-$17.20 forecast in December.

Usually, in February most dairy-related data are available for the entire previous year. However, due to the recent Government shutdown, most dairy-related data reported by USDA National Agricultural Statistics (NASS) and trade data reported by the U.S. Census Bureau have been updated through November but are not yet available for December. Since USDA Agricultural Marketing Service (AMS) continued to provide data during the shutdown period, AMS data referenced in this publication are up to date.

From December 2018 to January 2019, with the exception of a 0.8-cent per pound decline in the U.S. butter price, all of the U.S. major domestic wholesale dairy prices and international prices rose.

Tighter world milk supplies likely contributed to the increase in most dairy product prices from December to January. The year-over-year change in milk production for the top four exporters combined (New Zealand, the EU, the United States, and Australia) generally trended lower in 2018. In November, the last month for which complete milk production data are available, milk production for the top four exporters fell below November 2017 by 216 million pounds. Modest gains for New Zealand and the United States of 66 million and 110 million pounds, respectively, were more than offset by declines for the EU and Australia of 216 million and 176 million pounds, respectively. Relatively low milk prices throughout most of 2018 and drought in Australia have contributed to the milk production decline. 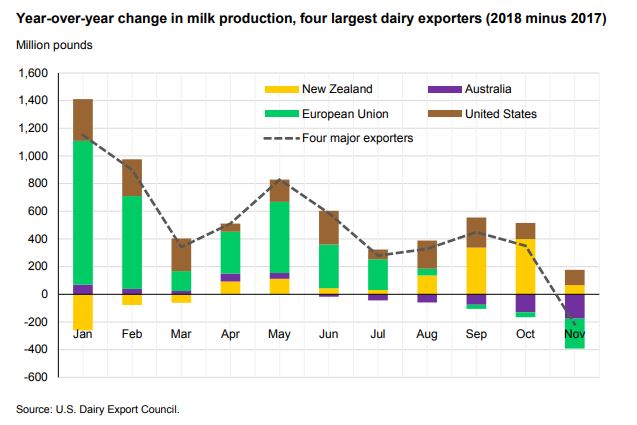 More specifically for the United States, NASS estimates that U.S. milk production in November totaled 17.370 billion pounds, 0.6 percent above November 2017. This is smaller than the year-over-year gain of 0.7 percent for October. NASS estimates that November milk cow numbers were 9.360 million head, a decline of 8,000 head from October. In recent weeks, dairy cow slaughter has continued to run above corresponding weeks of the previous year. Milk per cow averaged 1,856 pounds in November, 19 pounds above November 2017. 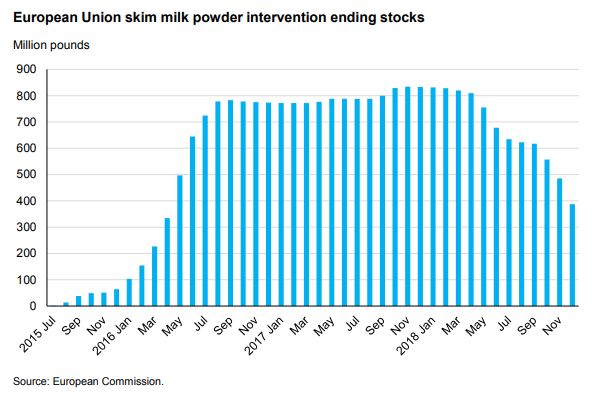 Fourth-quarter 2018 estimates have been adjusted slightly since the last forecast, based on the most recent data available. The estimate for milk per cow in the fourth quarter has been lowered by 20 pounds, resulting in a milk production estimate of 53.4 billion pounds, 0.2 billion pounds less than the December forecast. NASS will publish December milk production data on February 20.

Following a decline in the number of milk cows in November and relatively high slaughter rates during December, the forecast for the size of the milking herd has been lowered 5 thousand head for the first half of 2019; however, the rounded estimate for the year remains at 9.365 million head. Based on relatively weak yield growth continuing in November, the 2019 milk per cow forecast has been lowered 50 pounds to 23,505. These changes result in a milk production forecast of 220.1 billion pounds for 2019, 0.5 billion pounds lower than the previous forecast.

The outlook for feed prices has changed only slightly since the December forecasts. The corn price forecast for 2018/19 is $3.35-$3.85 per bushel, unchanged at the midpoint of the range. The 2018/19 soybean meal price forecast has been raised to $295-$335 per short ton, $5 higher at the midpoint of the range. The alfalfa hay price for November was $175 per short ton, $3 higher than October and $25 higher than November 2017. For more information, see the ERS Feed Price Outlook publication.

Public comment period will be extended and will remain open through December 26th Last month, the U.S. Department of Agriculture and the U.S. Food and Drug Administration held a public meeting to discuss the use [Read More …]