Total production expenses (including operator dwelling expenses) are forecast to increase $1.5 billion (0.4 percent) to $346.1 billion (in nominal terms) in 2019. Spending on feed and hired labor is expected to increase while spending on seed, pesticides, fuels/oil, and interest are expected to decline. After adjusting for inflation, total production expenses are forecast to decrease $4.6 billion (1.3 percent).

Farm sector equity is forecast up by $46.1 billion (1.8 percent) in nominal terms to $2.67 trillion in 2019. Farm assets are forecast to increase by $59.8 billion (2.0 percent) to $3.1 trillion in 2019, reflecting an anticipated 1.9-percent rise in farm sector real estate value. When adjusted for inflation, farm sector equity and assets are forecast to be relatively unchanged from 2018. Farm debt in nominal terms is forecast to increase by $13.7 billion (3.4 percent) to $415.7 billion, led by an expected 4.6-percent rise in real estate debt. The farm sector debt-to-asset ratio is expected to rise from 13.31 percent in 2018 to 13.49 percent in 2019. Working capital, which measures the amount of cash available to fund operating expenses after paying off debt due within 12 months, is forecast to decline 18.7 percent from 2018.

Get the 2019 forecast for farm sector income or see all data tables on farm income indicators. 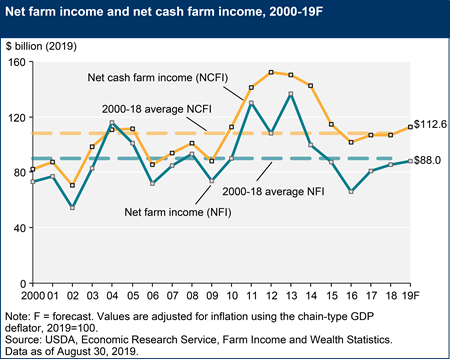 Median Income of Farm Operator Households Forecast To Increase in 2019

Median farm household income is forecast to reach $74,768 in 2019, an increase of 3.7 percent in nominal terms; in inflation-adjusted terms, it is a 1.9-percent increase. The total median income of U.S. farm households increased steadily over 2010-14, reaching an estimated $81,637 in 2014 (in nominal terms). Median farm household income then fell 6.0 percent in 2015 and continued to decline slightly through 2018. The 2017 and 2018 declines occurred despite an improvement in sector incomes as a whole and sharply higher income for households with commercial farm operations. However, only 10 percent of U.S. farm households operate commercial sized farms. The median farm household is more likely to operate intermediate or small farms, categories where farm-sourced income dropped in 2018 with no appreciable increase expected in 2019.

Get the 2019 forecast for farm household income or see the Farm Household Income and Characteristics data product tables for financial statistics of farm operator households. 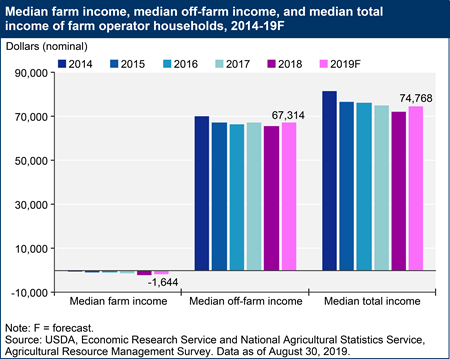 Hubbard Selected as USDA Under Secretary