Over the last year, the beef and cattle markets have experienced two unique “black swan” disruptions that impacted the markets in similar ways. The first event was the shutdown of a Tyson packing plant in Kansas for approximately four months after a significant fire. The second event is the spread of COVID-19 throughout the U.S. and its resulting impact on consumer spending and the beef supply chain. Following these events, the wholesale price of beef skyrocketed, while the price producers received for their cattle cratered.

Agriculture Secretary Sonny Perdue directed USDA’s Agricultural Marketing Service to investigate the Tyson plant closing’s impacts on the beef and cattle markets. This investigation was later expanded to include the impacts of COVID-19 on these markets.

The purpose of this investigation is to examine whether any regulated entities violated the Packers and Stockyards Act by taking advantage of the disruptions through price manipulation, collusion, restrictions of competition or other unfair practices. On Wednesday, USDA released the Boxed Beef and Fed Cattle Price Spread Investigation Report. Prepared by AMS in coordination with USDA’s office of the chief economist, the report summarizes market conditions in the beef and cattle markets before and after the events and analyzes the events through an economic lens. This report does not examine potential violations of the PSA because that investigation into potential violations is ongoing, limiting AMS’ ability to publicly report on it. In addition to the economic analysis portion, the report also delves into some other topics as well as solutions that have been discussed widely by industry in the aftermath of these events.

The Impact of the Packing Plant Fire

On Aug. 9, 2019, a fire broke out at one of the largest beef packing plants in the U.S., significantly impacting beef markets in the days and weeks that followed (Impacts of the Packing Plant Fire in Kansas). The fire, at a plant in Holcomb, Kansas, owned by Tyson Fresh Meats, stressed an already sensitive balance between processing capacity and a growing fed cattle supply. The Holcomb facility had a daily capacity of approximately 6,000 head and accounted for roughly 5%-6% of U.S. slaughter capacity, a not insignificant share for a single plant. In the weeks following the fire, boxed beef values skyrocketed, moving from $216.04/cwt the week of the fire to $230.43/cwt the week after the fire and to $239.87/cwt the week after that. That’s a $23.83 jump in the two weeks after the fire. For the month leading up to the fire, both feeder and fed cattle futures were largely holding steady at or slightly above the value the day of the fire. Immediately following the fire, both futures markets exhibited significant bearish activity. Following the declines in fed cattle futures prices, the price of fed cattle declined 6% the week following the fire.

Figure 1 shows the initial impacts of the fire on the live-to-cutout spread. These calculations are the spread between inputs and outputs and do not include processing costs (energy, labor, etc.) and fixed costs. However, they still offer a good measure of the overall relative health of packer margins, and in the weeks following the fire, they were exceedingly healthy. Leading up to the fire, calculated packer margins were healthy relative to the long-run history. In the weeks following the fire we saw the largest live-to-cutout spread on record since mandatory price reporting began, at least until COVID-19.

The Impact of Covid-19

Throughout the late spring, more than two dozen livestock processing plants temporarily closed due to COVID-19-related issues. In some cases, the closures were due to outbreaks among workers at the plants. In others, it was a struggle to keep workers, who were afraid of getting sick, coming into the plant. At the same time, the facilities that were able to remain open had to reduce their throughput significantly. These issues resulted in a significant decline in the number of cattle that were processed, as well as a major reduction in the volume of beef production in the U.S. (Figure 2). 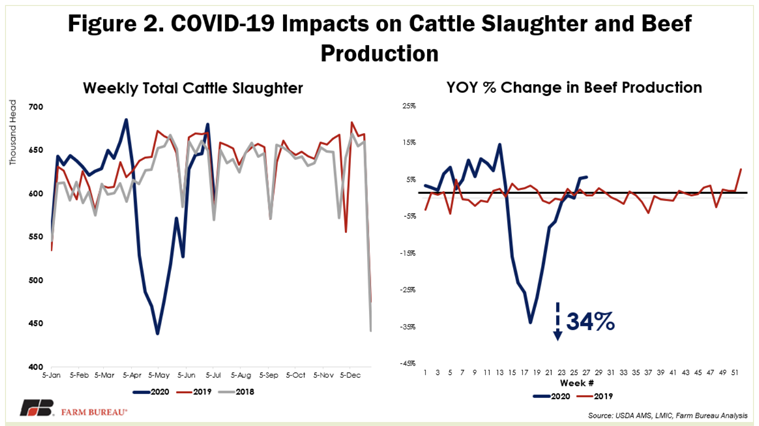 The supply issues in the beef markets caused a dramatic, even ridiculous, increase in the choice boxed beef cutout, as well as in the live-to-cutout spread. The increases experienced during the height of COVID-19 issues at beef processing facilities put the historic levels experienced during the packing plant fire to shame (Figure 3). 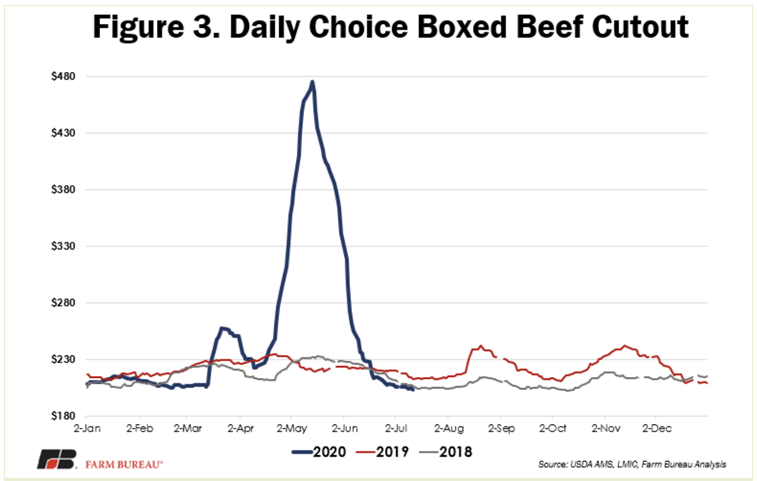 These market reactions created much consternation throughout the countryside, resulting in a variety of potential policy responses, as well as triggering USDA to include the COVID-19 market response in its investigation. USDA’s report notes that “findings thus far do not preclude the possibility that individual entities or groups of entities violated the Packers and Stockyards Act during the aftermath of the Tyson Holcomb fire and the COVID-19 pandemic. The investigation into potential violations under the Packers and Stockyards Act is continuing.” It is also important to note that USDA does not solely own investigatory authority over anticompetitive practices in the meat packing industry. USDA has been engaged in discussions with the Department of Justice regarding this investigation. Both departments will continue to engage as they continue their separate investigations.

Other Considerations in the Report

In addition to the economic analysis portion, the report also includes other considerations that delve into some of the solutions that have been discussed widely by industry in the aftermath of these events. The report notes that at the core of many of these discussions is the desire by many in the industry to see improved price discovery, reinvigorated competition and a more transparent relationship between the prices for cattle and their further processed products.

Livestock mandatory reporting, which has been in effect for nearly two decades, disseminates market information to the public and has become a key source of information for the industry. One concern voiced by industry about price discovery is the declining number of participants in the negotiated cash market. As the number of participants has faced a steady decline, confidentiality issues have resulted in times when prices cannot be reported in certain regions. An AMS-commissioned study on the current 5-Area cattle reporting regions pinpointed several ways to reduce the incidence of non-reporting due to confidentiality issues. Reducing the incidence of non-reporting will improve price discovery.

AMS is also considering changes made to the way that it reports slaughter data. Currently, AMS releases two separate reports, an initial estimated daily livestock slaughter report and a separate report on a two-week lag with the official slaughter numbers that have been gathered by USDA’s Food Safety and Inspection Service. The initial report’s high degree of accuracy has prompted the department to explore the idea of no longer referring to the initial daily report as an “estimate” and encouraging the market’s immediate use of the information.

The report notes challenges to smaller and medium-sized producers’ access to risk management training. Cattle feeders who had hedged when placing cattle on feed prior to the pandemic were able to mitigate the steep decline in live cattle prices once the impacts of COVID-19 hit the economy. Small and medium-sized producers could benefit from products tailored specifically to operations of their size. The report offers an example of reducing the number of pounds per CME feeder and live cattle contract, currently at 50,000 pounds and 40,000 pounds, respectively, to a lower number of pounds to make the contracts more accessible to smaller producers.

Additionally, the report notes that the Federal Crop Insurance Corporation board of directors recently approved changes to the Livestock Gross Margin and Livestock Risk Protection crop insurance products to make these instruments more affordable and accessible to producers. Improving these risk management solutions could allow smaller producers to more effectively compete with large producers and weather market disruptions that have a disproportionate impact on smaller producers.

The report also touched on issues related to smaller processors and the cooperative model as an option for producer collaboration to enhance marketing power. The current pandemic created a surge in demand for services provided by small and very small processors. In addition, there was a large uptick in consumers interested in buying meat more directly from the producer. The report outlined USDA’s commitment to working with stakeholders to balance food safety with these growing consumer preferences and e-commerce platforms.

The report covered recent moves by USDA to update the PSA, as well as potential moves legislators can take to broaden USDA’s ability to respond to issues in the market. In January, USDA issued a proposed rule to establish criteria the secretary would consider when determining whether an undue or unreasonable preference or advantage has occurred in violation of the PSA. USDA is currently reviewing the thousands of comments received in response to the proposal as it works to finalize the rule. The report also discussed the idea of creating a beef contract library similar to the swine contract library USDA currently maintains under PSA. The report notes a similar library for beef transactions could potentially help increase price discovery in cattle markets as well as enhance access to market information for all market participants.

The report also noted that legislators may consider targeted amendments to the PSA that could provide USDA with investigative and enforcement tools on par with other federal agencies. For example, “the ability to issue Civil Investigative Demands with respect to unfair or deceptive acts or practices would bring USDA’s authorities in line with those of the Federal Trade Commission and DOJ.” Subpoenas are useful, but the additional authority to require written reports and answers to questions could be very beneficial in some investigations. The report also noted that amendments to elevate certain conduct to criminal violations and provide the secretary with the tools necessary to carry out appropriate criminal investigations may also be a very helpful consideration.

The market reaction following both the packing plant fire and the supply chain issues brought on by COVID-19 put many cattle producers at a significant disadvantage. USDA’s report outlines the market conditions before, during and after these events through an economic lens and discusses their ramifications. This report goes beyond analyzing the market reaction to these events to examine other responses, including policy actions proposed by industry groups and steps Congress could take to allow USDA more leverage in conducting investigations and enforcing laws.

USDA stands ready to assist stakeholders and policymakers as the industry continues to explore options to improve price discovery and level the playing field between producers who were harmed and large meatpackers who benefited by the market reactions following these unforeseen and extreme events.

“We are working diligently to implement the 2018 Farm Bill with efficiency and accuracy” U.S. Secretary of Agriculture Sonny Perdue today announced an update on the implementation status of the 2018 Farm Bill. President Trump signed [Read More …]

Milk production is flat and dairy product stocks are shrinking. Mark and Bob talk about the differences between their forecasts for milk prices and the futures and USDA forecasts. They also discuss why PPDs become [Read More …]