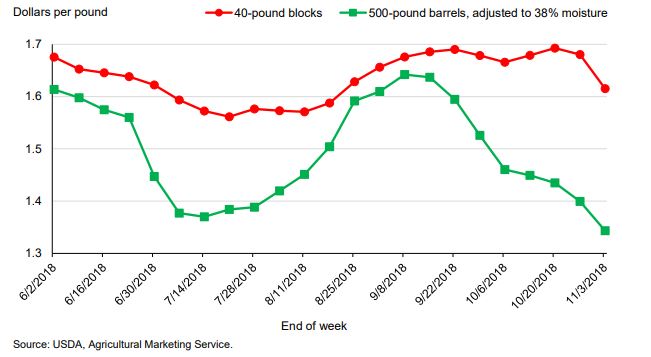 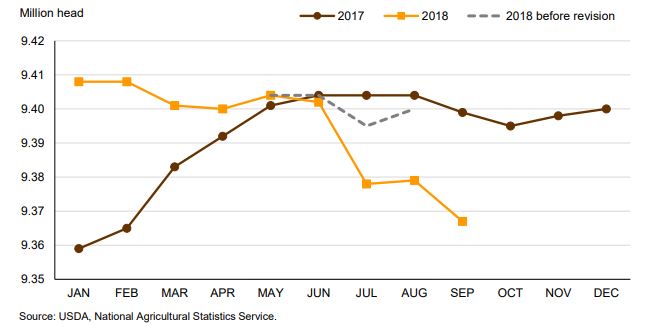 Dairy Forecasts for the Remainder of 2018

Due to revisions of cow numbers for July and August and the fall in cow numbers reported by NASS in September, the estimate for the size of the milking herd in the fourth quarter of 2018 has been lowered 35,000 head to 9.365 million. Milk per cow, on the other hand, is forecast slightly higher for the fourth quarter, at 5,740 pounds. The lower forecast for the size of the milking herd more than offsets the increased yield per cow, resulting in a fourth-quarter milk production forecast of 53.8 billion pounds, 0.1 billion pounds lower than last month’s forecast.

Forecasts for both imports and exports in the fourth quarter on a milk-fat basis are unchanged at 1.8 billion and 2.4 billion pounds, respectively. With higher than expected milk-fat basis ending stocks for the third quarter, the forecast for 2018 ending stocks has been raised 0.4 billion pounds to 13.9 billion. The domestic use forecast for the fourth quarter has been raised slightly to 56.1 billion pounds, as lower prices for cheese and butter are expected to lead to gains.

A smaller milking herd in late 2018 is expected to persist into 2019; therefore, the milk cow forecast has been lowered to 9.375 million head, 35,000 less than last month’s forecast. However, with increased culling of the herd, higher milking efficiency is expected, motivating an increase in the milk per cow forecast to 23,565 pounds. With these changes, the overall milk production forecast for 2019 is now 220.9 billion pounds, 0.5 billion pounds lower than the last forecast.

*While supply and use data are available for American-type cheeses (cheddar, Colby, Monterey, and Jack combined), there are no supply and use data readily available specifically for 40-pound blocks or 500-pound barrels of cheddar cheese, making any analysis of the price spread difficult. While both 40-pound blocks and 500-pound barrels can be used to produce processed cheese, barrels tend to be used for processed cheese more often than blocks

The transition to electronic identification in cattle and bison The United States Department of Agriculture (USDA) is currently working with federal, state and industry partners to strengthen its traceability system to protect the long-team health, [Read More …]

“In America, the big get bigger and the small go out,” Secretary Perdue said President Donald Trump’s agriculture secretary said Tuesday during a stop in Wisconsin that he doesn’t know if the family dairy farm [Read More …]