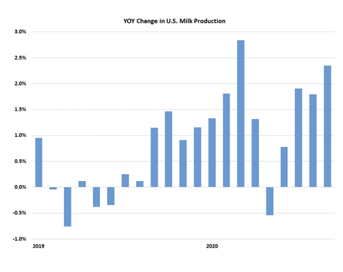 USDA stunned the market on Tuesday, reporting a dramatic surge in U.S. milk output last month. September milk output reached 18 billion pounds, up 2.3% from a year ago. That’s on top of a respectable gain in September 2019, marking the strongest two-year advance since early 2018. Milk output fell short of prior-year volumes in the Pacific Northwest, the Southeast, and parts of the Southwest, but it was sharply higher in the rest of the nation. Production was especially formidable in the Midwest and Plains states and in Colorado. In California, dairy producers managed to make 3.2% more milk than last year with 4,000 fewer cows. Advances in herd management and dairy genetics are clearly adding up to a lot more milk per cow.

After surveying producers, USDA revised its estimates of July and August milk cow numbers, showing a steady climb in the dairy head count throughout the third quarter. Last month there were 9.366 million milk cows, 33,000 more than the prior year. Low slaughter rates suggest that the dairy herd continues to grow. The combination of more milk and more cows stopped the bulls in their tracks, and made for a lot of red ink on LaSalle Street through mid-week. 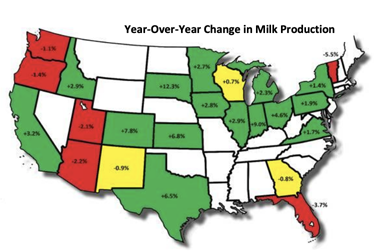 But on Thursday the cheese markets strengthened convincingly, signaling that fresh Cheddar is still in short supply. USDA’s Cold Storage report confirmed that the national cheese stockpile continued to shrink last month, as it has done every month since cheese stocks surged to an all-time high in April. Total cheese stocks fell to 1.36 billion pounds, 1% smaller than the prior year. Inventories of American-style cheese also declined by a wider than typical margin and finished slightly lower than year-ago levels. The drawdowns hint at strong demand, no doubt helped by 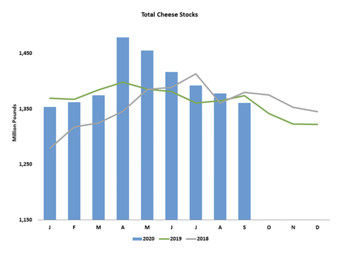 government purchases for the Farmers to Families Food Box program. USDA gave the Class III markets another reason to rally this afternoon, when they announced they will spend another $500 million for food box donations through the end of the year. With that, CME spot Cheddar barrels closed today at $2.455 per pound, up 25ȼ since last Friday. Barrels are within shouting distance of the summer highs, and they have not suffered a daily setback in a month. Blocks climbed 5.25ȼ to $2.7725. 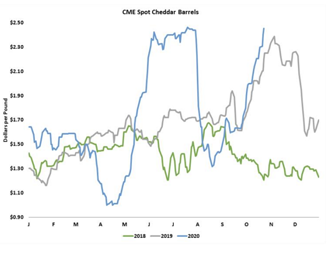 Cheddar and whey plant in St. John’s, Michigan, this week, which suggests that national cheese output will climb. On the other side of Lake Michigan, Upper Midwest cheesemakers tell USDA’s Dairy Market News that rising coronavirus infections are making it difficult for some plants to fully staff their facilities and run at capacity. Additionally, many had been wary of building inventories in case demand slips or the cheese price falls, although the latest food box announcement likely quelled some of those fears. 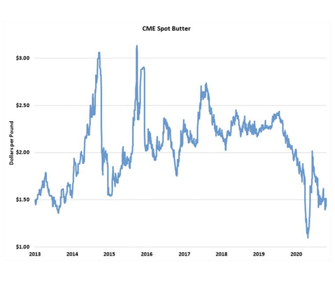 The butter market continued to soften. CME spot butter fall back below $1.50, a milestone reached frequently this year but otherwise not since 2013. It closed today at $1.435, down 7.5ȼ from last Friday. Butter inventories declined noticeably from August to September, but, at 344 million pounds, the national butter stockpile is still 18.3% larger than it was a year ago and the largest September total since 1993. Grocers are expecting home cooks and bakers to be particularly ambitious this season, while sales of butter through foodservice channels remain slow.

CME spot milk powder fell back from last week’s seven-month high and closed today at $1.10975, down 4.25ȼ for the week. Milk powder prices moved slightly lower at the Global Dairy Trade auction on Tuesday. Domestic demand for milk powder is steady, while exports are strong. U.S. milk powder remains the cheapest in the world.

With both butter and powder losing ground this week, Class IV futures posted sizeable losses, widening the disparity between projected milk revenues in the cheese states and elsewhere. November Class IV fell 57ȼ this week to $13.77 per cwt. The December and January contracts lost at least 70ȼ apiece. Meanwhile, Class III values soared. November Class III jumped $1.27 and the December and January contracts were also very strong. First half 2021 futures posted modest gains. The big increase in nearby Class III futures means that the producer price differential and depooling will once again take a bite out of many dairy producers’ milk checks in October and November. USDA announced the November Class I mover at $18.04, a respectable price but one that is far lower than November Class III at $22.19. The industry needs to remedy the relationship between class pricing formulas and depooling rules so that dairy producers can reap the full benefits of the formidable rally in the cheese markets. Another week of strong export sales and concerns about South American crops propelled the feed markets upward once again. December corn closed at a one-year high of $4.1925 per bushel, up 17.25ȼ from last Friday. November soybeans settled at $10.8375, up 37.5ȼ to the highest price for a spot contract since mid-2016. December soybean meal climbed nearly $20 to $386.40 per ton, its highest value in more than two years.

The National Oceanic and Atmospheric Association upped the odds of a La Niña to 85%, which suggests that Argentine farmers may struggle to produce an average crop this season. In Brazil the weather is less of an issue, but domestic demand for crops is on the rise as the nation tries to simultaneously grow its livestock and corn-based ethanol sectors. Brazil highlighted its unusually tight crop supplies by announcing that it would suspend its import tax on corn and soy. The atmospheric and economic climates in South America suggest that U.S. crop exporters will be busy for a while.

This Week in Dairy with Joey Airoso and Daryl Maas

Joel Hastings with DairyBusiness News looks at a dozen dairies with digesters capturing methane from some 35,000 cows, 22 miles of underground pipeline, and a bio gas processing operation. All this was recognized at Calgren [Read More …]

Dairy farmers must contact their local USDA FSA office to enroll in CFAP Tuesday is the first day of farmer signup for the Coronavirus Food Assistance Program (CFAP), the direct payments for producers funded by [Read More …]