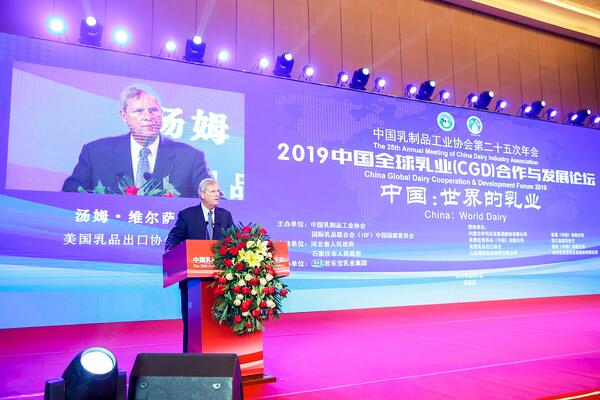 Returning from a whirlwind seven-day trip to China and Japan, USDEC President and CEO Tom Vilsack said he is optimistic about the long-term health of U.S. dairy exports despite challenges caused by current trade disputes.

“With hard work and patience, we will continue to grow both volume and value for the U.S. dairy industry,” Vilsack wrote in a Tuesday letter to members sharing takeaways from his trip. “We are on the right track to compete to win.”

Vilsack took his trip (August 28 to Sept. 3) to China and Japan to build relationships in vital markets for the future of the U.S. dairy industry.

What follows is a summary of each trip followed by a visual, one-stop travelogue, displaying images, anecdotes and news nuggets from social and news media.

After meeting with U.S. dairy suppliers and customers in China, Vilsack said the reality of why U.S. dairy exports to China have fallen 43% over one year was brought home. Exports have been hit by a one-two punch of retaliatory tariffs and the spread of African Swine Flu that has killed much of China’s pig population, reducing the need for feed that utilized U.S. dairy ingredients.

DAIRY EXPORTS TO CHINA BEFORE AND AFTER TARIFFS

“In that environment the best we can do is look for ways to maintain the relationship in the hope that the trade dispute gets settled sooner rather than later, recognizing we have no control over when or if that will happen,” said Vilsack.

Vilsack met with officials at China’s Ministry of Commerce (MOFCOM), the governmental arm overseeing trade issues, and with the China Chamber of Commerce for Import & Export of Foodstuffs, Native Produce and Animal By-Products. CFNA influences more than 6,000 agricultural member companies, including more than 1,000 in the dairy sector alone.

A former U.S. Agriculture secretary, Vilsack did not dwell on trade issues. Instead, he proposed “win-win” dairy solutions, such as utilizing U.S. permeate and whey protein in feed to rebuild the Chinese pig herd decimated by African Swine Flu. He touted that idea in a keynote speech at the China Dairy Industry Association’s annual meeting.

Held in Shijiazhuang, a city of 10 million, the industry meeting was co-sponsored by USDEC, one of three organizations outside China awarded the organization’s International Cooperation Friendship Award.

Trump vows U.S. will be stronger on trade

China to Impose Tariffs on Nearly All US Dairy Imports

China’s finance ministry announced on Tuesday that it will impose retaliatory tariffs next week on nearly $60 billion worth of U.S. imports in reaction to the Trump administration’s plans to place 10-percent duties on another [Read More …]