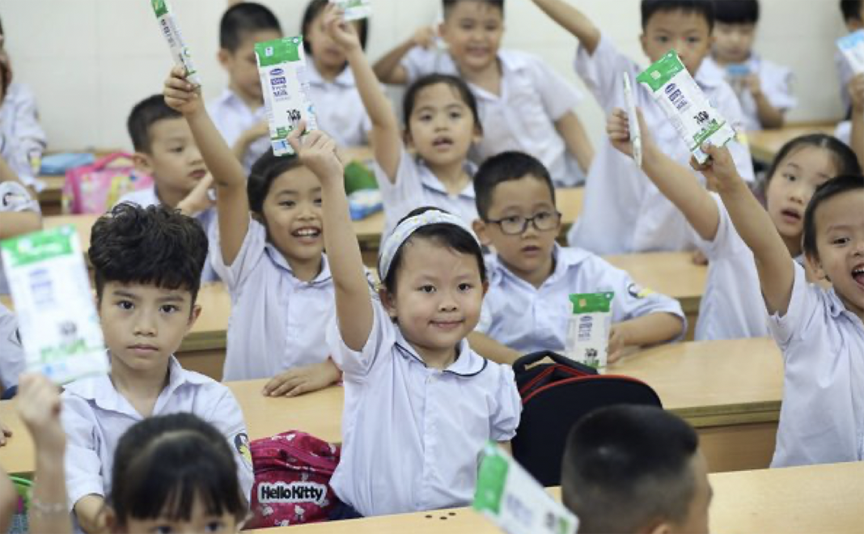 Vietnam Dairy Product JSC (“Vinamilk”), one of Vietnam’s first advocates for the School Milk Program (SMP), marked its contribution towards the health and well-being of 3.3 million students on this year world milk day. 14 years on and the company remains committed to the better nutrition of Vietnamese children.

SMP is currently participated by 68 countries globally. In Vietnam, Vinamilk, inspired by the program’s vision, was the first Vietnamese dairy company that adopted and commissioned the program’s inaugural implementation in province of Ba Ria-Vung Tau in 2007.

Since 2016, endorsed by the Vietnamese government’s official approval, the program has scaled up nationwide. In turn, Vinamilk expanded its wholehearted participation in the project, extending its contribution to 23 cities and provinces.

With effective coordination throughout the implementation process, the number of children registered to drink milk at school continues to exceed expectations. Hanoi, in particular, has enabled more than 1 million students aged 3-10 years old participating in the program, marking of 91% penetration rate after 2 years of implementation. Ba Ria-Vung Tau and Bac Ninh provinces, the first two provinces participated in the program, have reached optimal rates of 100% and 99.3% respectively.

With educational activities, Vinamilk wishes to work towards building better awareness among students and parents on proper nutritional practices and environmental protection.

“Pioneering the implementation of SMP in Vietnam, Vinamilk always recognizes this program as one of our top priorities. We have been collaborating with government agencies to actively promote SMP across Vietnam. This is a highly valued program that will benefit Vietnamese children nutritionally, and provide them with the solid foundation for their long-term physical and intellectual development,” said Ms. Mai Kieu Lien — Vinamilk’s CEO.

Over the years, SMP has considerably contributed to the physical improvement of kindergarten and primary school students in Vietnam. In Bac Ninh province, the rate of stunting has decreased from 26.9% in 2013 to 23.6% in 2020. More impressively, the malnutrition rate in Ba Ria-Vung Tau has dropped from 28.40% in 2007 to 18.90% this year.

Reported by Unicef, more than 350 million children might not have access to regular school feeding and nutrition services during the pandemic. In Vietnam, COVID-19 has made negative impact on 31.8 million workers that can further effect on nutrition care for schoolchildren.

Vinamilk has been actively working with the Vietnamese government and municipal authorities to reduce the cost of milk consumption in SMP, working towards the ultimate goal of ensuring Vietnamese children’s health and nutrition. This practice has leverage SMP benefit in the critical time.

Thousands of samples have been tested in Vietnam for SARS-CoV-2 that causes COVID-19. However, multiple others, including foreigners, have remained in quarantine at residential areas and centralized quarantine centers. The quick and accurate testing can [Read More …]

Vinamilk is the very first and only Vietnamese company recognized as “ASEAN ASSET CLASS” and at the same time, led Vietnam’s Top 3 Listed Companies according to the 2019 ASEAN Corporate Governance Scorecard results, a [Read More …]