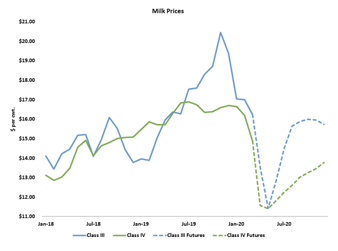 Volatility reigned in the markets once again this week. After much back and forth, nearby Class III futures finished even lower than last Friday. The May contract took the brunt of the selling. It fell 75ȼ to just $11.43 per cwt. Deferred Class III futures fared much better. Most contracts regained a dollar or so. Class IV futures also bounced back. Nearby contracts added about 20ȼ, while second-half futures climbed roughly 50ȼ. Still, values are heartbreakingly low, with second-quarter Class IV well south of $12.

The novel coronavirus has strangled foodservice and export channels, and the industry simply has more milk than it can handle. Countless loads are pouring into lagoons around the country. Spot milk is moving at as much as $8 under 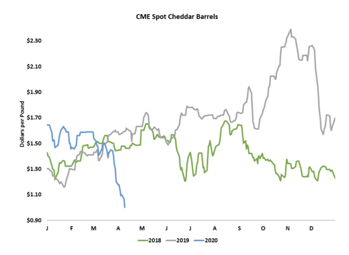 class in the Midwest and at a $9 discount in Idaho. Cheesemakers are pushing as much milk through their plants as possible, and filling their warehouses with product. Fresh cheese is abundant, and the surplus is weighing heavily on the market. This week, CME spot Cheddar blocks dropped 9.5ȼ to $1.055 per pound. Barrels plummeted 13.75ȼ to $1. One load changed hands at 99.75ȼ, the first trade below a dollar in the spot barrel market since October 2000. American cheese is a bargain, trading much below comparable product in Europe or Oceania even after adjusting for the strong dollar. Based purely on price, U.S. cheese export prospects are excellent. But these are trying times for trade.

The cream market is terribly oversupplied. Butter churns are running hard, but they cannot fully compensate for lost Class II demand, and storage is filling up fast. Cream is historically cheap and getting cheaper. CME spot butter dropped 3.25ȼ this week to $1.2475, the lowest value since 2009. 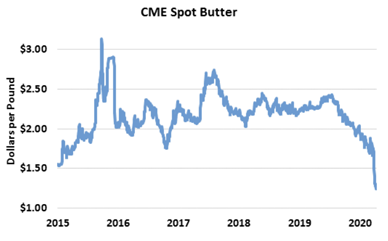 Ever the contrarian, CME spot whey powder managed to gain ground this week. It climbed 2ȼ to 35ȼ, a six-week high. Milk powder values also ticked upward, with a boost from a surprisingly resilient performance at the Global Dairy Trade (GDT) auction. Skim milk powder (SMP) slipped only 0.8%, which is impressive considering all the bad news that market has had to absorb in the three weeks since the last GDT event. After adjusting for protein, GDT SMP is equivalent to nonfat dry milk (NDM) at $1.22 per pound. Whole milk powder 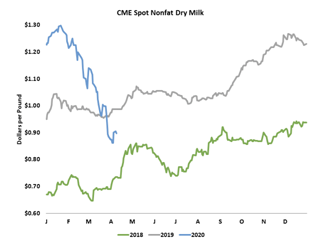 fared even better, climbing 2.1%. China bought large volumes. In Chicago, spot NDM rallied 3.5ȼ to 89.75ȼ. Dairy Market News reports that prices have fallen low enough to attract a few more buyers this week, but product is still piling up. In some cases, manufacturers are running out of onsite storage and looking for new homes for milk powder.

With so much lost demand, the dairy industry must cut production. The market is laboring ruthlessly to make that happen. Processors and cooperatives are doing all they can to absorb the flood of spring milk, but in some areas, they are drowning. In the most oversupplied regions, cooperatives are forcing dairy producers to either cut output or face stiff financial penalties in addition to the already inadequate milk price. The industry broadly agrees that something must be done to prevent a tidal wave of sellouts.

The markets cheered early this week when the National Milk Producers Federation (NMPF) and the International Dairy Foods Association (IDFA) agreed to a sweeping proposal meant to reduce milk dumping, stabilize the dairy markets, and provide more dairy products through federal food aid programs. Both Class III and IV futures traded limit up nearly across the board on Tuesday, but they retreated later in the week, likely because at this point the proposal is no more than a request. NMPF and IDFA asked USDA to fill U.S. food banks with dairy products, and to allow school nutrition programs and Supplemental Nutrition Assistance Program (SNAP) beneficiaries the flexibility to buy dairy products in a wider variety of fat, flavor, and packaging options. These provisions are likely the most politically palatable part of the proposal, and Congress has already allocated funding to USDA for commodity purchases. NMPF and IDFA also asked that USDA offer two types of loans for processors. In theory, the working capital loans would allow processors to carry larger inventories, while forgivable loans would help those processors who have lost sales to retain staff and keep taking on milk. The producer initiatives in the Milk Crisis Plan would likely have the largest impact. NMPF and IDFA asked USDA to reopen the signup period for the Dairy Margin Coverage (DMC) program, which would allow those who had not enrolled to receive payments in months when dairy margins are poor. If the futures do not improve, the DMC would generate a payout for producers every month for the rest of the year. USDA Secretary Perdue has signaled his willingness to consider reopening DMC in the recent past. NMPF and IDFA also requested that USDA compensate dairy producers for milk dumped in April through June at the lowest class price.

Finally, and most ambitiously, the Milk Crisis Plan calls for USDA to pay dairy producers an extra $3 per cwt. if they cut milk production by 10% relative to their March 2020 output. As proposed, the program would run from April to September and would be suspended in months in which the average of Class III and IV prices exceeds $16 per cwt. If USDA endorsed the proposal, most dairy producers would likely take immediate steps to cut milk production, if they haven’t already done so under the impetus of the market and their cooperatives.

The proposal would likely reduce milk output more significantly and more broadly than the industry would on its own, which would slow the flow of dairy commodities into storage and could reduce the volume of product hanging over the market when the economy reemerges from its Covid-19 lockdown. USDA is expected to weigh in on the industry’s requests next week. Whatever policies are enacted to shore up dairy producer finances, the industry must still reckon with a weak economy and full warehouses even after the crisis has passed.

It was a much quieter week in the feed markets. May corn settled at $3.3175 per bushel a penny higher than last Friday’s three-year low. At $8.635, May soybeans were up 9.25ȼ this week. USDA updated its supply and demand balance sheets, but the report held few surprises. Ethanol production continues to slow dramatically, but corn exports are picking up speed.

China’s retaliatory tariffs have contributed to a 47% drop in U.S. dairy exports to China over a 12-month period.     A Phase One trade agreement between the U.S. and China signed Wednesday makes progress [Read More …]

Peterson Weighs in on Second CFAP Program from USDA