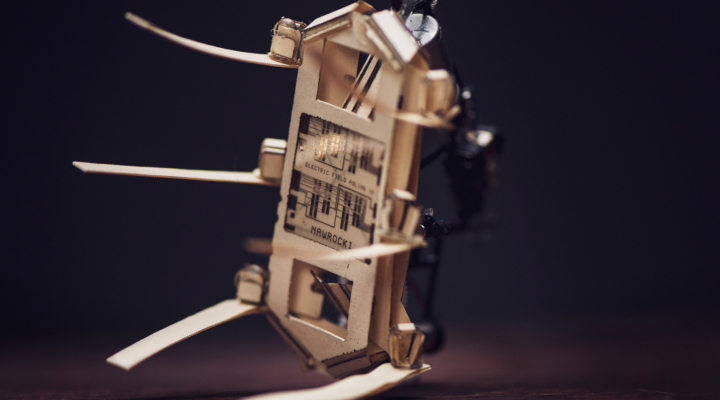 Even cows have emotions and a happy cow is a better milk producer than one under stress. But how do dairy farmers read an individual bovine animal not known for its facial expression amongst a herd of up to 10,000?

Richard Voyles, a professor in the Purdue Polytechnic Institute, believes artificial intelligence and robotics could hold the key to giving dairy farmers in-depth data on the status of their herd, including illness or anxiety.

“The point is, treating animals well increases productivity by as much as 15%. It’s a substantial increase.”

Voyles is collaborating with engineering and agriculture colleagues at Purdue and two other universities on two research projects to supply livestock and dairy farmers with a wealth of new information about their herds. Both projects received funding from the U.S. Department of Agriculture.

Unlike a field of corn, it’s hard to determine the health of herd of cows just by flying over them with a drone. With that in mind, Voyles is looking at the problem inside-out using robotic pills ingested by the cows.

The small robots are mobile, allowing movement between each of the four stomach chambers in a cow.

“This is where AI comes in,” he said. “We need to be able to move those robots around so that we have a sense at all levels of what’s going on in there to really understand things.”

The prototypes are larger and made out of polymers, so at this point they do not dissolve in the stomach acids. Such pills would be expected to be passed by humans. But animals like cows obtain nutrients from plant-based food by fermenting it in a compartmentalized stomach prior to digestion. So solids, instead of being passed, are regurgitated and chewed again.

Researchers, including animal scientists, are working with Voyles, looking at new locomotion methodology for the robots. They have to be very low power and rely on external sensing and powering and recharging.

The internal organs of a cow make movement – or simply staying in one of the stomach chambers – a difficult proposition.

“Cow stomachs are constantly experiencing contractions and are moving stuff around as they convert indigestible to digestible protein,” Voyles said. “We really need to stay inside the stomach chamber because it’s very complex, very stratified. But what happens is the pill always ends up in the wrong place if they are not robotic.”

Voyles is head of the Collaborative Robotics Lab at Purdue, focusing his research on novel robotic mechanisms, sensors, self-adaptive software and real-time controls. Initially turned on to robotics during the Three Mile Island nuclear incident as a Purdue undergraduate, Voyles said the connection between engineering theory, real technology problems and engineering solutions excites him from both the Engineering and Engineering Technology perspectives

Voyles is working with colleagues at Penn State and Virginia Tech to develop a millipede-inspired locomotion system for inside the animals that is inherently safe. He believes the pills, with further development, could eventually have a use in human surgery and well-being.

Combined with the robotic pills is the second phase of the work: Developing a body sensor network for entire herds at a time, offering farmers closer monitoring of the health of the cows at any given time.

The robotic pills could safely connect data out to a collar on the cow which is then broadcast to a network via either cell phone or wi-fi signal. Both the robotic pills and the network research are funded through the National Science Foundation and the U.S. Department of Agriculture.

“They are moving around in large herds so we need to know things like who is coughing and where,” Voyles said. “Do we need to isolate them, is there sickness involved, do they need medication?”

He said farmers could more specifically pinpoint which cows are sick, reducing sweeping applications of antibiotics to only the animals that need it.

The use extends beyond medicine to daily upkeep such as feeding. Dairy cows are fed at least two times per day, if not more, so there are many opportunities to tweak their diets with vitamins, minerals and other supplements in a natural way. But we need to track individual cows.

“If we use this network to bring the data throughout the farm as a digital fabric back to farmers, they can make decisions and then send that back to things like robotic feeders,” Voyles said.

With this as a foundation, Voyles foresees building extensive networks with various levels of analytics using artificial intelligence and aggregating an animal’s behavior into the herd’s behavior.

Using technology to improve the quality and productivity of animal agriculture goes beyond a business point of view. There is the potential for big global impacts in terms of land and water use

“Now there’s an important aspect of sustainability in there when you talk about this,” Voyles said. “If you can improve the health and productivity of the animals, you can reduce methane. You can also optimize their water use and land use while improving their well-being.”

Voyles’ research aligns with Purdue’s Giant Leaps celebration, acknowledging the university’s global advancements made toward artificial intelligence as part of Purdue’s 150th anniversary. This is one of the four themes of the yearlong celebration’s Ideas Festival, designed to showcase Purdue as an intellectual center solving real-world issues.

Robotics, automation and precision technologies, November 7th Southwest Dairy Days will take place on November 7 from 9 a.m. to 3 p.m. at T&K Dairy located at the intersection of U.S. Highway 84 East and [Read More …]

DeLaval and Fair Oaks Farms celebrated the completion of a state-of-the-art robotic milking facility built for optimal cow comfort and efficiency – as well as thousands of visitors. The Robotic Dairy Visitor Center at Fair [Read More …]