Though it will take some time for the impacts of the weather to become fully appreciated, a reduction in milk production and increase in culling is likely in the coming weeks.

With nearly three quarters of the United States blanketed by snow, weather has become a major protagonist in the dairy markets this week, wreaking havoc across the supply chain. Uncharacteristically cold weather has been a particular issue in Texas and eastern New Mexico where producers have been scrambling to protect their herds from the frigid temperatures. Impassable roads and plant shutdowns have forced producers in some areas to dispose of milk on the farm. Though it will take some time for the impacts of the weather to become fully appreciated, a reduction in milk production and increase in culling is likely to be borne out in the coming weeks. 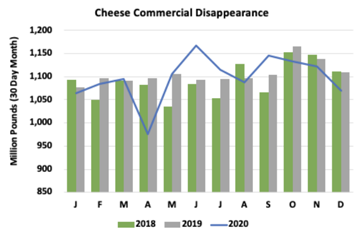 Of course, winter weather complications didn’t end at the farmgate. Several processing facilities in the area were forced to shut down as energy supplies were diverted toward heating residences and essential services. Of those that were still operational, many were forced to work with reduced staffing as employees were unable to get to work. While plants outside the affected areas have attempted to absorb the milk that would have been typically processed by these plants, it is likely that a significant amount of milk had to be dumped over the course of the week.

Despite these complications, cheese manufacturers in the Midwest report that the market for spot milk has tightened somewhat. During the past week spot milk could be obtained for up to $6.50 under Class III prices – still a bargain by historical standards but not as cheap as in recent weeks. Manufacturers across the United States report that cheese demand has improved. While retail demand still reigns supreme, foodservice orders have ticked up as more restaurants have begun to open. An increase in demand would be welcome news considering that at 1.105 billion pounds, commercial disappearance of cheese in December was the lowest for that month since 2016. 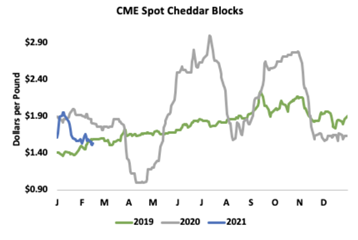 A short week didn’t translate to a shortage of action in the spot Cheddar markets. After a lethargic start, with blocks and barrels unchanged on Tuesday, both products began to slide. Blocks gave up 2.75¢ on Wednesday, followed by another 2¢ to hit a weekly low of $1.51/lb. on Thursday. Friday breathed a bit of life into blocks, pushing them up 2.75¢ to close the week at $1.5375/lb., 2¢ lower than last week. In an active week during which 26 loads traded hands, barrels moved continuously lower after Tuesday, ultimately ending the week at $1.4125/lb., 7.75¢ lower than last Friday.

As the March 1 deadline for selling old crop butter rapidly approaches, the butter market seems to have found some traction. Foodservice demand is still depressed, 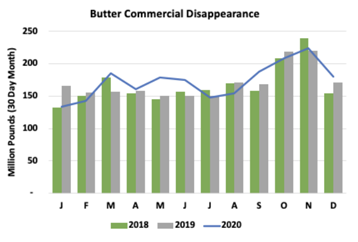 according to market participants, but retail sales remain robust. Commercial disappearance of butter was up a surprising 5.2% year over year in December. Meanwhile, a USDA Section 32 solicitation for purchases of about 15 million pounds of butter between April and June also likely bolstered market sentiment, even as the announcement was aligned with expectations.

The situation remains precarious, however, as cream is readily available, and spot loads have become even more plentiful as facilities affected by winter weather try to rehome supplies. Churns have been working hard and while some concerns persist about inventory build, healthy demand seems to be stemming many of these issues. The CME spot butter market moved up convincingly this week, adding 15.5¢ to end the week at $1.55/lb., the highest price since last September. Even with the spot market gains this week, U.S. butter remains a steal compared to international product. Another strong performance for butter and anhydrous milkfat at Tuesday’s Global Dairy Trade event lifted prices for these products even higher. 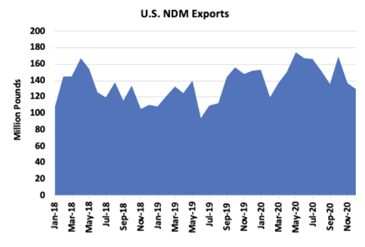 After opening Tuesday’s spot session with a .25¢ gain, nonfat dry milk prices slid over the balance of the week, ultimately closing Friday’s trade at $1.0925/lb. 17 loads traded hands during the week. Even though some powder manufacturers have been affected by the inclement weather, production has remained robust. A shortage of containers continues to garner headlines and is interrupting the ability of exporters to move product abroad, even where interest from global buyers exists.

The whey markets once again flexed their muscles this week, with spot prices rising to 55¢/lb. on Wednesday and Thursday before retreating slightly on Friday to close the week at 54.75¢/lb., up half a penny from last Friday. Demand is reportedly healthy from both domestic and international sources though logistical challenges, namely the shortage of containers, continues to challenge the ability to exporters to actually get product moved. 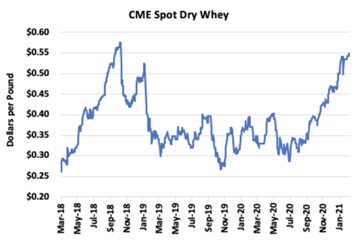 Class III milk futures were able to make some gains on Tuesday, even as the spot cheddar markets were quiet on the day. However, these gains were largely erased over the remainder of the week with most nearby contracts giving up ground as spot cheese prices slid. Class IV milk futures performed similarly with Tuesday’s gains subsequently canceled out by losses later in the week. Despite spot butter’s strength, most nearby Class IV contract settled on Friday within a few cents of prior week levels.

The grain futures markets were mixed during the week with nearby contracts losing value while contracts further out on the curve moved upward. Corn futures saw modest gains early in the week undone by losses on Thursday and Friday. Nevertheless, the MAY21 corn contract, finished Friday’s session at over a nickel higher than last Friday’s settlement. Grain prices remain significantly elevated and will continue to be a threat to producer profitability in the near term.

The Bulls Bellowed With Shouts of “New Highs!”

The bulls bellowed on LaSalle Street today, with shouts of “New highs!” CME spot Cheddar blocks climbed 3.25ȼ this week to $18.575 per pound. Barrels rallied 5.25ȼ to $1.79. Both blocks and barrels stand at [Read More …]