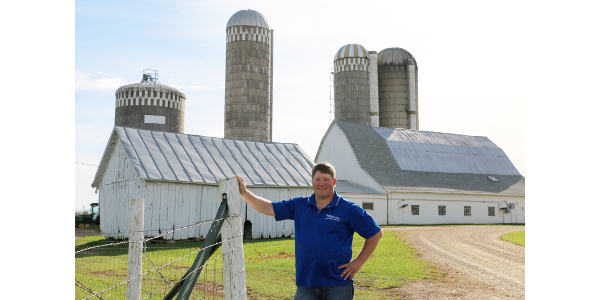 Wisconsin Farmers Union wishes to express heartfelt sympathy for all Wisconsin dairy farmers who received termination notices from their processor this week. “As part of a three-generation dairy farm myself, I know what the cows, the land, and the way of life mean to my family. I sincerely hope that all affected farmers will be able to find a new buyer for their milk,” said Darin Von Ruden, president of Wisconsin Farmers Union.


Von Ruden went on to express frustration that dairy farmers have been placed in this circumstance. “This situation is not normal, and it is not necessary. This is the result of a failed government policy that incentivizes overproduction, and then leaves farmers to weather the fallout alone – being picked off one by one. Congress had the opportunity in the 2014 Farm Bill to prevent this train wreck, by passing the Margin Protection Program with the Market Stabilization feature left intact. Instead, members of Congress deliberately voted for the Goodlatte-Scott Amendment that removed Market Stabilization at the 11th hour, at the urging of organizations like the International Dairy Foods Association and the Dairy Business Association.”

Wisconsin Farmers Union urges Congress not to pass any Farm Bill that does not include a system of oversupply management. “We owe it to dairy farmers and to taxpayers to make this common-sense change,” said Von Ruden.

Von Ruden’s comments come on the heels of a series of meetings held throughout Wisconsin about the Canadian supply management system that garnered intense interest among dairy farmers. Von Ruden recalled a comment by Canadian dairy farmer Murray Sherk at one of those meetings. Sherk said, “A situation where farmers just get dropped from their milk processor would never happen in Canada. Every dairy farmer would take a half percent or one percent cut to account for the loss of a market. No group of farmers would be singled out to shoulder the burden for everyone else.”

WFU is particularly troubled that Arla, which internationally is a cooperative, sent termination notices to Wisconsin farmers this week. It appears that U.S. farmers who ship to Arla are not full members of the cooperative like their European counterparts. “Cooperatives exist to work in the best interests of their members, and a core cooperative principle is equal treatment of all members. It seems that these farmers were not co-op members and therefore did not benefit from those principles,” said Von Ruden.

Von Ruden urged all dairy cooperative members to bring forward resolutions demanding that any adjustments in co-op milk supply be borne by all members equally, rather than just a few – or worse, actually allow some members to expand, while others are cut off.


Farmers Union also urges all co-op members to bring forward resolutions at their cooperatives in favor of a nationwide supply management program. A resolution template can be found at the newly launched www.DairyTogether.com.

Cooperatives finding themselves with an oversupply of milk should consider implementing a “base-excess” program to discourage overproduction that drives down profits for all members. Cooperatives such as Land O’Lakes, Prairie Farms, Family Dairies USA, Scenic Central, and several regional boards of Dairy Farmers of America have already implemented such programs. “If we want to see incomes for farmers increase, we will still need a nationwide program that applies to everyone,” said Von Ruden. “But in the meantime, cooperatives should at least be doing what they can to prevent the price to their patrons from decreasing – or worse, directly putting a handful of their patrons out of business.”

Finally, WFU encourages all dairy farmers, whether shipping to a private buyer or to a cooperative, to demand a minimum of 90 days notice of any termination. A model dairy purchasing contract can be found at www.DairyTogether.com.

Bill pays for a range of programs associated with food, agriculture and rural America The first comprehensive proposal for a new federal farm bill calls for changes to payments to farmers when commodity prices dip [Read More …]

Overview Fallout from the developing tariff conflict between the United States and some of its major trading partners has already had a major, negative impact on the price outlook for U.S. dairy farmers. But these tariff actions [Read More …]