On July 27, Senate Republicans announced the details of their $1 trillion COVID-19 stimulus package, the Health, Economic Assistance, Liability Protection and Schools Act, follow-up legislation to the Coronavirus Aid, Relief, and Economic Security Act passed in March (What’s in the CARES Act for Food and Agriculture).

In line with the CARES Act, which provided $23.5 billion in funding for agricultural relief efforts, the HEALS Act appropriates $20.457 billion, slightly more than 2% of total spending in the bill, for additional COVID-19 relief for agriculture. Notable additions in terms of commodity support are independent and contract poultry growers and processors of agricultural products – which could be interpreted to include biofuel (ethanol) producers and textile mills, such as domestic users of cotton.

In addition to the direct agricultural-related support, the HEALS Act appropriates additional funding for commercial fisheries and makes some useful improvements to the Paycheck Protection Program. Today’s article highlights the agriculture-related provisions of the HEALS Act. A future article will review how the PPP is addressed in both the HEALS Act and the House’s Health and Economic Recovery Omnibus Emergency Solutions Act.

Agriculture in the HEALS Act

“prevent, prepare for, and respond to coronavirus by providing support for agricultural producers, growers, and processors impacted by coronavirus, including producers, growers, and processors of specialty crops, non-specialty crops, dairy, livestock and poultry, including livestock and poultry depopulated due to insufficient processing access and growers who produce livestock or poultry under a contract for another entity.”

Combined, the CARES and HEALS acts would provide $43.5 billion to USDA to craft agricultural assistance packages to offset the financial losses associated with COVID-19, Figure 1. 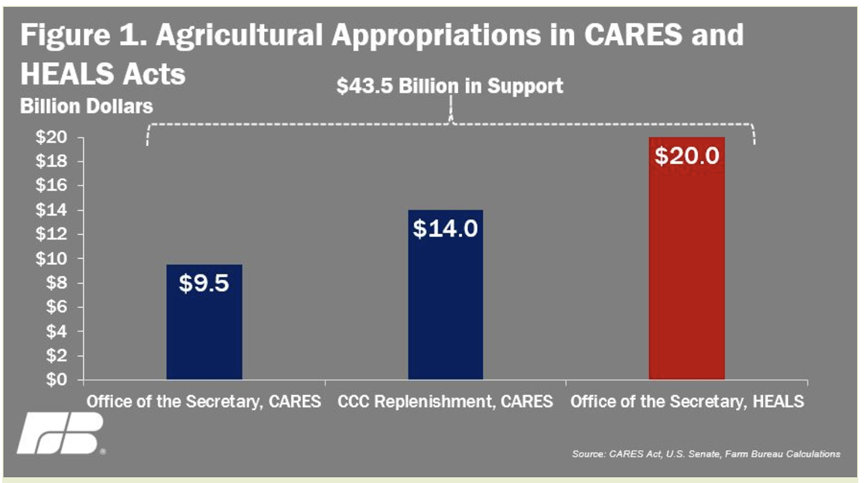 The livestock, dairy and poultry sectors in particular were severely impacted by the shuttered food services sector. The five-area fed cattle price has yet to fully recover to early 2020 levels and has settled at a nearly 25% decline from where it began the year. The CME lean hog index showed extreme volatility, gyrating between lows of 20% down for the year to 15% up, and back down nearly 25%. As a result of reductions in chicken processing capacity, chicken farmers across the country have experienced longer waiting periods between flocks, received fewer birds to raise, and in some cases have been forced to depopulate millions of healthy birds.

These supply disruptions, unaddressed in the CARES Act, are provided for in the HEALS Act, which contains support to livestock and poultry farmers who had to depopulate due to insufficient processing access. Figure 2 shows the impact to cattle, hog and poultry slaughter as the onset of the pandemic brought disruptions to processing facilities as they struggled with access to a willing and healthy labor force. This disruption in capacity created a massive backlog in animal processing, which forced some producers into the heart-wrenching position of having to euthanize their animals. This is the last resort, as farmers do everything they can to avoid this outcome, but in such a tightly coupled delivery system they are threatened with going out of business having raised animals they can no longer sell. 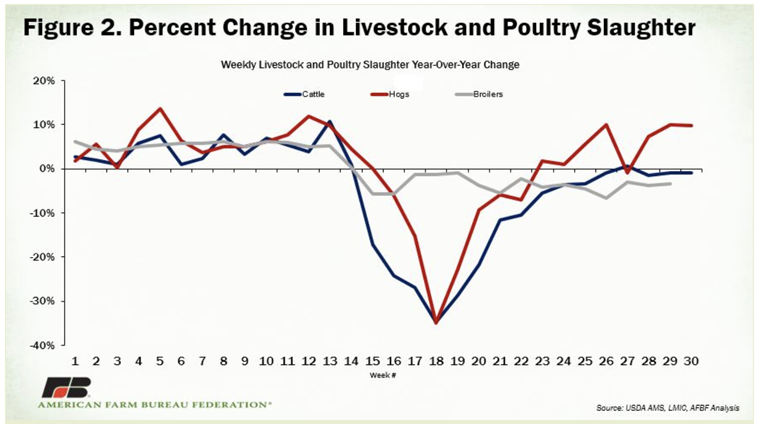 Given the broad authority associated with the $20 billion in support provided in the HEALS Act, it’s expected that USDA will now be able to create financial assistance programs for producers who have yet to receive support under the Coronavirus Food Assistance Program, such as independent and contract poultry growers, contract hog producers, producers who had to depopulate animals due to lack of processing capacity, textile mills, such as domestic users of cotton, and biofuel producers. It’s also expected that 2020 crops impacted by COVID-19-related demand destruction, e.g., new crop corn, cotton, soybeans and wheat, will be included in any additional support crafted by the department. Figure 3 highlights the appropriated funding for agriculture, rural development and the Food and Drug Administration. 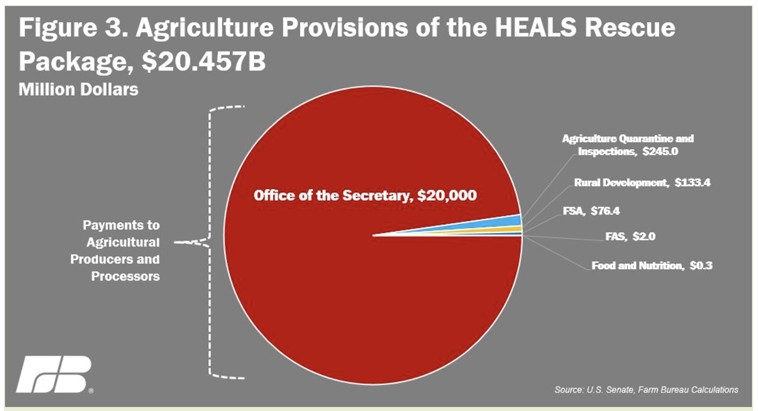 Comparing the HEALS and HEROES Acts

Other than the most obvious difference between the HEALS Act and the HEROES Act – the price tag – the two bills also diverge on how they handle agriculture. Still, there is some considerable overlap. Both acts provide billions in additional support for agricultural producers, HEALS at $20 billion and HEROES at $16.5 billion in direct support and as much as $33 billion as estimated by the Congressional Budget Office when considering other agricultural relief and conservation efforts in the HEROES act, i.e., Food and Agriculture in the HEROES Act and Reviewing the Proposed Expansion of the SHIPP Cropland Set-Aside Program.

The HEROES Act contains considerably more detail on what the funding is for, such as prescribing payment rates and the methodology for funding depopulation indemnities and agricultural processors such as textile mills and ethanol plants, or the expansion of conservation set-aside programs, where the HEALS Act excludes an expansion of the SHIPP cropland set-aside program, and is more broadly written, allowing USDA more discretion on how the support should be distributed.

Both bills contain support for producers who were forced into the difficult situation of having to euthanize their animals. The HEALS Act specifically includes language providing support to “livestock and poultry depopulated due to insufficient processing access,” while the HEROES Act directs the Agriculture secretary to make payments to covered producers to offset losses related to the intentional depopulation of market-ready livestock and poultry due to insufficient regional processing access. For the first month following an initial date set by the secretary, the payment rate will reimburse a producer for 85% of the losses determined by the secretary. For each subsequent 30-day period, the payment rate will decline by 10% of the value of the losses.

Given the broad language in the HEALS Act, support to biofuels producers and textile mills could potentially be another area where the bills agree. The broad language under HEALS could extend some of the $20 billion allocated to the secretary to these two sectors. The HEROES Act more specifically spells out the support offered to these sectors, including direct assistance to the biofuels industry through the Renewable Fuel Reimbursement Program. Any entity or facility that produced renewable fuel or advanced biofuel in 2019, including corn starch ethanol, is qualified to receive a direct payment of 45 cents per gallon of fuel produced between Jan. 1, 2020 and May 1, 2020. If the facility idled production during this period, it is eligible to receive $0.225 per gallon for the amount produced during the same time period in 2019. Also in the HEROES Act is a direct payment to domestic users of upland cotton and extra-long-staple cotton, regardless of the origin of the crop, for 10 months beginning on March 1, 2020, through Dec. 31, 2020. The payment can only be used for operating expenses.

While the HEALS and HEROES acts arrive at the same destination in terms of support for poultry, producers who had to depopulate animals, biofuel and textile processors, the HEROES Act is much more prescriptive with provisions that single out support for dairy processors and dairy producers, and provides for a massive expansion of the 2018 farm bill’s Soil Health and Income Protection Program.

Similar to the House-passed HEROES Act, the Senate’s HEALS Act is a follow-up stimulus package to the CARES Act, which was enacted in March. As in the House’s HEROES Act, the Senate bill contains critical provisions for the agricultural sector, including the capacity for USDA to provide financial support to poultry producers, farmers who had to euthanize animals and agricultural processors such as textile mills and ethanol plants. Both acts also provide funding to USDA to craft additional financial assistance programs to help farmers and ranchers negatively impacted by COVID-19.

While the HEALS Act does not increase the borrowing authority of the CCC, when combined with the $14 billion Commodity Credit Corporation replenishment provided in the CARES Act, the HEALS Act and CARES Act combined provide USDA with $34 billion in remaining funds to design additional COVID-19 relief packages for agriculture. Including the $16 billion in CFAP support, USDA would have annual appropriations totaling $50 billion to provide much-needed financial relief to agricultural producers, growers and processors impacted by coronavirus – in line with Farm Bureau’s recent requests to Capitol Hill.

While many of the agricultural-related provisions are similar, the provisions of the HEALS Act provide USDA much more flexibility to craft crucial assistance for producers as well as processors of agricultural products. The next step in this process is to bridge the divide between the HEALS and HEROES acts – an effort that is likely to extend into August.

Due to the extensive nature of this article it will be split into two parts. See below for the link to Part 2 Earlier, Congress approved the House Bill 748, the Coronavirus Aid, Relief and [Read More …]

Navigating the CARES Act – An Analysis for Dairy Webinar

The CARES Act, signed in late March by President Donald Trump, enacts $2 trillion worth of emergency provisions to help protect employers and employees during the COVID-19 crisis. The bill contains provisions designed to keep [Read More …]