Despite milk prices in June and July recovering strongly from the early COVID-19 lows, many dairy farmers have yet to reap those higher prices and public and private risk management tools are ineffective in covering these losses as PPDs are generally considered acceptable basis risk. Dairy farmers and congressional leaders are now asking what can be done to fix the current situation.

There are several concepts being considered. Some have argued that the advanced nature of fluid milk pricing is no longer needed given the hedging abilities provided by the 2018 farm bill. Without advanced pricing, and without the higher-of, the base Class I mover in July would have been announced in early August (instead of late June) at $19.87 per hundredweight, more than $3.30 per hundredweight higher than the current price, reducing the magnitude of the negative PPD and partially eliminating the incentive to de-pool. What about reverting back to the higher-of and keeping the current advanced pricing rules? Well, that gets you to a base Class I milk price of $19.13 per hundredweight, $2.58 higher than the current pricing methodology.

How about eliminating the advanced pricing component and going back to the higher-of, i.e., announcing the July Class I price in early August based on the higher-of Class III and IV prices? That results in the highest price for farmers because the pricing is timelier and based on the highest-valued manufacturing class of milk. Had these rules been in place, the July base Class I mover would have been $24.54 per hundredweight, nearly $8 per hundredweight above the current pricing methodology. In Florida, where the Class I differential is as high as $6 per hundredweight, the Class I price would be $30.54 per hundredweight. The only downside to eliminating the advanced pricing component and going back to the higher-of is that it brings back the challenge of hedging Class I milk for farmers, beverage milk processors and end-users such as schools and restaurants. Figure 5 highlights these alternative pricing proposals and the impact on the base July Class I mover. 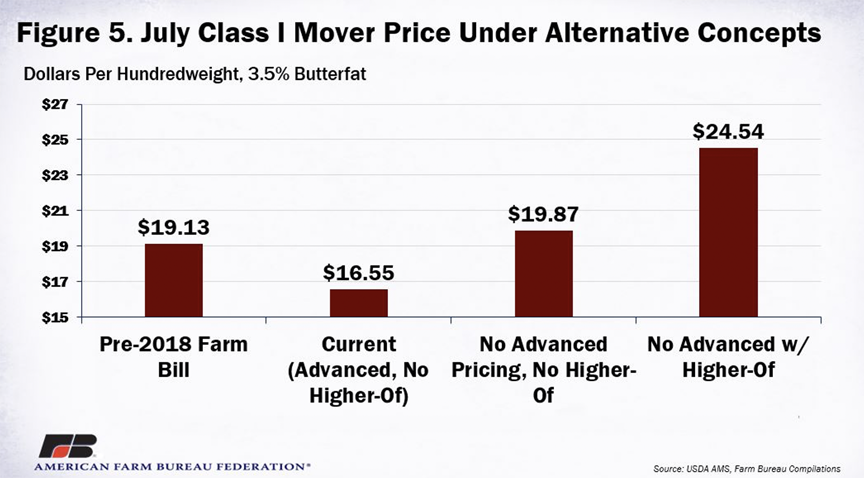 FMMOs have long been a mechanism to redistribute dollars from the higher-valued Class I market to producers supplying the manufacturing plants such as cheese or butter facilities, i.e., cross-product subsidization. When the manufacturing milk value is greater than the Class I value, there is less to redistribute from the Class I market, and in some cases the pool is deficient, resulting in a negative PPD. When that is the case, manufacturing plants and cooperatives may elect to de-pool milk in the appropriate classes to reduce their pool liabilities.

There are several possible solutions to de-pooling. First, the ability to re-pool milk after de-pooling could be significantly constrained such that the financial incentive associated with de-pooling is reduced. This may not eliminate negative PPDs, however. Another proposal involves eliminating the advanced pricing component and bringing back higher-of pricing to ensure Class I prices are always above the manufacturing value. Nothing short of the latter would guarantee an elimination of negative PPDs and thus the incentive to de-pool. More forward-looking concepts could include less regulation in the form of a competitive-pay-pricing environment without minimum price enforcement or the pooling of Class I differentials only.

For the last two months dairy farmers have dealt with historical market volatility leading to record-high cheese and protein prices, followed by a quick price drop. Combined with a recent change in milk pricing rules, dairy farmers have become more attentive to FMMO pricing rules that allow massive de-pooling of milk and record-large milk check deductions. Even for farmers who did the “right thing” and managed their risk, public and private risk management tools have been unable to protect them.

So which way does the industry go? Do we revisit Class I milk pricing rules and de-pooling? There is certainly momentum in that direction. What about component pricing in the Southeast or tighter pool qualification criteria? Higher make allowances are certain to be a goal for some.

Before rushing to address the most recent conditions, dairy industry stakeholders should support giving more dairy farmers a voice and a vote during FMMO reform by amending the decades-old Agricultural Marketing Agreement Act to allow for modified bloc voting (Dairy Farmers Deserve a Voice and a Vote on Policy That Impacts Their Farms). Once achieved, the industry can gather as a whole and find a mutually agreeable path forward that rewards the entire dairy supply chain, as well as consumers.

Editor’s note:  John Newton, PhD, as Chief Economist at the American Farm Bureau Federation, can be contacted at jnewton@fb.org or (202) 406-3729. twitter.com/@New10_AgEcon. This article is taken from a longer column issued by the author entitled “Depooling and Record Large PPDs Continue into July” issued on Aug. 13. The full article may be found here https://www.fb.org/market-intel/de-pooling-and-record-large-negative-ppds-continue-into-july

Message from ADSA Regarding the Novel Coronavirus (COVID-19)

The ADSA Board and staff are continuously monitoring the coronavirus (COVID-19) outbreak. We are aware of the currently urgent nature of the situation and are closely following statements from the U.S. Centers for Disease Control [Read More …]

Editors note: You can listen to Richard Stup discuss these issues with Joel Hastings on the DairyVoice podcast at DairyVoice.com. The U.S. is confronting an outbreak of a novel coronavirus that causes serious respiratory disease [Read More …]

For the past few days, there has been immense participation by Vietnamese netizens and attention from local media for the Campaign photo, which went viral on the Internet, called “Protect Doctors 24h”. The campaign photo [Read More …]