Volume up 9 percent over last year, but sales to Asia lag in closing months of 2018.

U.S. dairy exports reached a record-high volume in 2018, increasing 9 percent over the prior year despite a fourth-quarter slowdown, according to trade data released today.

Suppliers shipped 2.188 million tons of milk powders, cheese, butterfat, whey products and lactose in 2018, and total dairy exports added up to 1.993 million tons (4.394 billion lbs.) of total milk solids. The value of U.S. exports was $5.59 billion, 2 percent more than the prior year.

In the face of retaliatory tariffs, global oversupply, weak commodity markets and other challenging headwinds, exports rose to an equivalent of 15.8 percent of U.S. milk solids production in 2018, the highest percentage ever in a calendar year.

Over the previous three years, exports were equivalent to 14.2 percent of production. 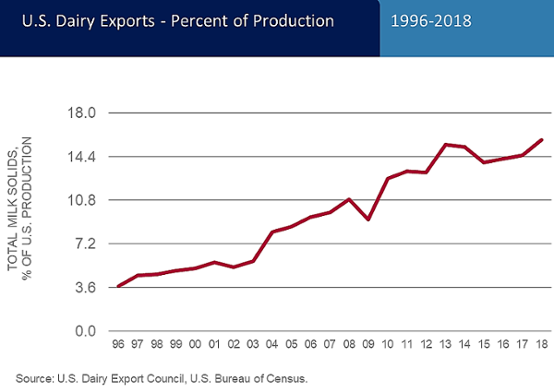 U.S. export gains were led by record shipments of dry ingredients: nonfat dry milk/skim milk powder (NDM/SMP), high-protein whey products and lactose. However, performance was dimmed by a fourth-quarter slump, during which volume declined 11 percent year-over-year, after posting a 16 percent increase in the first three quarters.

In addition, the U.S. reclaimed the title of the world’s largest single-country cheese exporter. 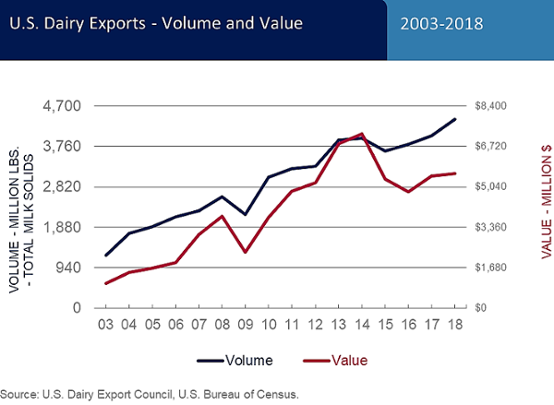 Loss of sales to China—America’s third-largest single-country market—followed mid-year retaliatory tariffs, playing a role in the year-end decline. U.S. sales to China were up 17 percent in the first half of the year but fell 33 percent in the second half—a drop of more than 10,400 tons of product per month. Exports to Southeast Asia also faded toward year-end, sliding 18 percent in November-December, while shipments to Japan were down 10 percent throughout the second half. 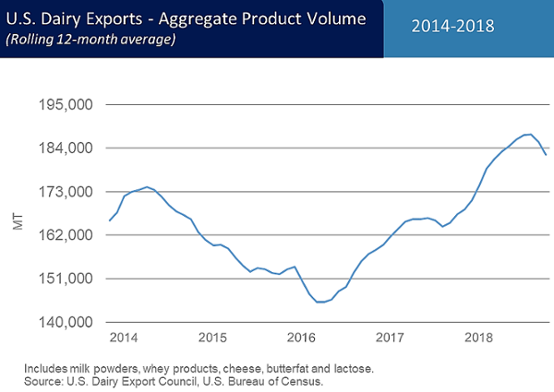 U.S. exports of NDM/SMP totaled 715,491 tons in 2018, up 18 percent from the prior year, as U.S. suppliers took advantage of strong, broad-based global import demand. Sales to Mexico (up 25 percent, +70,761 tons, to 348,989 tons) reached a record high, and shipments to Southeast Asia (up 32 percent, +52,449 tons, to 216,077 tons) were the most ever as well, despite falling 25-percent short in the last two months of the year. These two markets accounted for more than three-quarters of U.S. NDM/SMP export volume. The Philippines remained the top market in Southeast Asia, and shipments to Indonesia and Vietnam increased 70 percent. In contrast, other key markets suffered losses: exports to China, Peru, Pakistan, Japan and the MENA region were just 70,561 tons in 2018, down 29 percent (-28,820 tons).

(USDEC has adjusted official U.S. Bureau of Census trade data for NDM/SMP and WMP since June 2016 to account for shipments we believe are misclassified.)

Total whey exports were 545,890 tons, down fractionally compared with 2017 volume. Shipments of whey protein concentrate (WPC) were up 4 percent and sales of whey protein isolate (WPI) were up 20 percent. Both reached new highs. Exports of dry whey were up for the third straight year, finishing 2 percent above 2017 levels. Exports of modified whey (permeate), however, lagged prior year, dropping 13 percent.

Whey trade was impacted by China tariffs more than any other product category. Whereas China made up 45 percent of U.S. whey exports in 2017, it accounted for just 31 percent in the last six months of 2018. In the first half of the year, whey exports to China were up 3 percent. In the second half, after tariffs were put in place, exports were down 39 percent—a decline of 48,469 tons in six months. For the full year, whey exports to China were down 18 percent. Almost all the drop-off came in dry whey and modified whey (permeate).

WMP shipments were 45,706 tons, up 80 percent from 2017 levels. The majority of the increase came from Southeast Asia (mostly Vietnam and Singapore), where sales were up more than three-fold to 19,741 tons.

One exception to the growth trend was food preps (blends), which hit an eight-year low export volume of 62,721 tons, down 13 percent. Sales to Canada, which accounted for more than half that volume, were off 2 percent, while shipments to all other major markets were down more significantly.

Alan Levitt is vice president of communications and market analysis at the U.S. Dairy Export Council.

Will November 2020 USDA Milk Prices Rival Those of September 2014?