Look closely at the Holstein cattle on the University of Florida Dairy Unit and you will notice some of them appear to be sporting a shorter hair coat than the rest. “Slick” cattle have a genetic mutation that causes a very short hair coat year-round. Slick cattle are better able to regulate body temperature during periods of heat stress than non-slick cattle. An example of a calf with the slick mutation is shown in Figure 1.

The slick trait is caused by a mutation in the prolactin receptor gene (a gene involved in milk yield). The mutation is dominant – meaning inheritance of one copy of the gene leads to the offspring having short hair. The slick mutation arose naturally in several breeds of cattle in the Caribbean basin, including the Senepol, Carora, and Criollo Limonero.

The slick mutation was introduced to the Holstein breed in Florida in the mid-1980s at Pine Valley Dairy when Holsteins were inseminated with Senepol semen. The slick animals at the University of Florida, all of which are registered with the Holstein Association, are derived from the animals born from those matings. There are also slick Holsteins in Puerto Rico. In that case, the gene was probably introduced accidentally when cattle on the island were upgraded by crossbreeding with Holsteins.

Research at the University of Florida and the University of Puerto Rico has shown that inheritance of the slick mutation minimizes the effects of heat stress on milk yield (See Figure 2). Thus, introducing the slick gene into dairy herds in hot climates may be an effective and relatively easy way to reduce the effect of heat stress on dairy cattle. 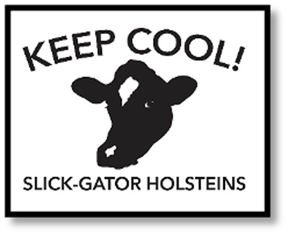 The University of Florida maintains a small herd of slick Holsteins that is being used to upgrade the genetics of slick Holsteins. The goal of the slick breeding program is to produce homozygous slick Holstein cattle (two copies of the slick allele) with high genetic merit for economically-important traits. Currently, all of the animals at the University of Florida are heterozygous – they possess one copy of the slick allele and one copy of the non-slick allele. Half the offspring of a heterozygous animal will be slick and half will have normal hair coat when mated to a non-slick animal. In contrast, all offspring from a homozygous slick animal will have short hair.

The breeding goal is being pursued in two phases. In phase 1 (currently underway), the objective is to raise the net merit ($NM) of bulls carrying the slick gene to over $800 by mating slick females to elite non-slick bulls and slick bulls to genetically-superior non-slick females. Slick calves are being produced by both artificial insemination and transfer of embryos produced in vitro. For phase 2, the objective is to produce homozygous offspring by mating slick females with high net merit to slick bulls with high net merit.

Semen from two of the heterozygous bulls produced at the University of Florida is for sale. Slick-Gator Blanco (551HO03574) has a genomic value for $NM semen is currently available and over 3000 straws have been sold. Slick-Gator Lone Ranger (047HO01029) is pictured in Figure 3. The bull has a $NM of +554 and is owned by the University of Florida. Over 4000 straws of Lone Ranger semen have been sold in the United States, Canada, Mexico, Honduras, Panama, Thailand, and Qatar.

Breeders and genetic organizations outside of the University of Florida have taken note of the benefits of the slick allele and are developing their own slick Holsteins. Breeders in Ohio,

Wisconsin, Puerto Rico and Honduras and genetic companies in the USA, New Zealand, and Australia are breeding slick dairy animals. Semen from a homozygous slick Red Holstein bull from Puerto Rico named Simba is now available in the US and a company called Acceligen has used modern gene editing techniques to produce a slick Angus in Brazil.

The US Holstein Association has funded a research project between the University of California-Davis (Anna Denicol) and the University of Florida (Peter Hansen) to evaluate the performance of slick Holsteins in hot and cool seasons raised in six dairies in California and Florida. The first calves for this project have now been born. What this means is that more data regarding the suitability of using the slick mutation to combat heat stress will become available, helping more cattle “Keep Cool” with slick genetics!

Editor’s note: This article appears in the Univ. of Florida Dairy Update newsletter. Interested persons in dairy can subscribe by visiting https://animal.ifas.ufl.edu/dairy/uf-dairyupdate-L/

Who: Faculty and students with the animal sciences department at the University of Florida Institute of Food and Agricultural Sciences — as well as volunteers — will staff stations to educate the public about how [Read More …]