There are important long-term shifts happening in the nonfat dry milk and butter markets. Estimated inventories of skim milk powder in Europe are dropping quickly which is tightening up the global supply and demand balance for NFDM/SMP. At the same time, US and global inventories of butter have been building with butter production running above year ago levels in both the US and the EU-28. As you would expect, prices are reacting to these shifting fundamentals and there are a lot of questions in the industry whether the trends will continue into 2020.

The price of NFDM on the CME spot market has increased from $1.02/lb. in early August to $1.22 in late November. The US supply and demand situation is not overly tight. Combined NFDM+SMP production has actually been running stronger than expected in recent months, up 5.0% from last year during the third quarter. Good domestic demand has been offsetting some of the production growth and US NFDM stocks are down 2.9% from last year at the end of September. But with 254 million pounds of NFDM sitting around, US inventories are ample and will likely stay ample through the first half of 2020.

The strength that we’ve seen in US NFDM prices is being driven by global factors. While there aren’t any official data on stocks of SMP in the other major exporting countries INTL FCStone puts together estimates based on production and export data. Reported EU-28 SMP production is only up 15 million pounds this year while their exports are up 355 million pounds. As you can imagine, that has resulted in a large drop in estimated EU stocks. Estimated EU stocks at the end of September are down 540 million pounds (-54%) from last year in September. There is still 455 million pounds of SMP left in inventory, but at the current pace of declines, they would completely run out of product by August of next year.

Global SMP/NFDM prices are moving higher to start to ration the remaining inventory. SMP sourced from New Zealand was already trading at $1.37/lb. in late November, which makes the US market at $1.22 look cheap! The higher SMP/NFDM prices are going to slow domestic and global import demand. They are also going to encourage more production of powders, but we could see global inventories pulled even lower in 2020 which will continue to support NFDM/SMP prices. 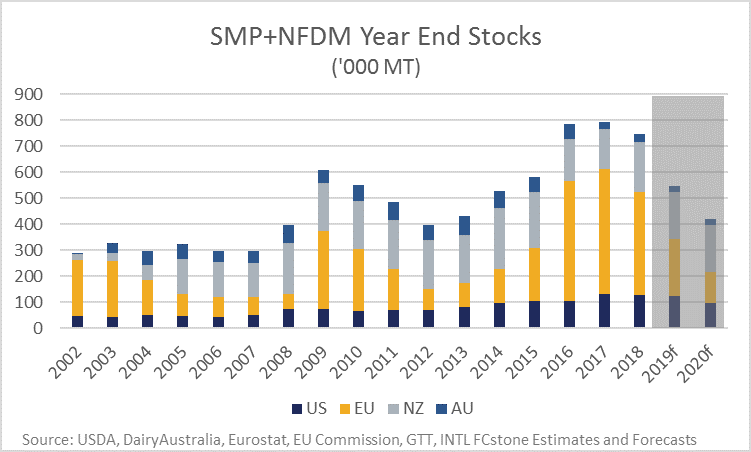 The story for the US butter isn’t as dramatic as the NFDM/SMP story. In the third quarter, milk production was only up 0.6%, but butter production was up 3.3%. Weaker sales of cream to food service and retail, producing lower fat cheeses (less Cheddar, more mozzarella), weaker ice cream production and the continued decline in bottled milk sales all lead to more cream heading into butter production. Domestic demand has been decent, up 32 million pounds (+2.1%) YTD. But imports are up 21 million pounds, so it’s possible that most of the increase in domestic sales has been coming from imported butter, not from the growing supply of domestically produced butter. The net result is that US butter stocks have turned out larger than expected, up 2.8% from last year in October. So, stocks are up, and are expected to build further, but they aren’t looking out-of-control yet.

On a global basis, butter inventories look like they are building as well. Butter production in Europe is up about 138 million pounds YTD (+3.8%), but their exports are only up 57 million pounds (+22%). Domestic demand doesn’t look great, so we think it all nets out to about a 20% increase in year-end inventories, on top of 5% growth last year. The significantly larger EU stocks have helped to pull prices on the world market well below US prices and it looks like average EU prices in 2020 will be lower than in 2019. US butter stocks don’t look heavy enough to push US prices dramatically lower yet, but with the world market well supplies and US milk production growth accelerating, there is a possibility that US butter could spend some time below $2.00 per pound in 2020. 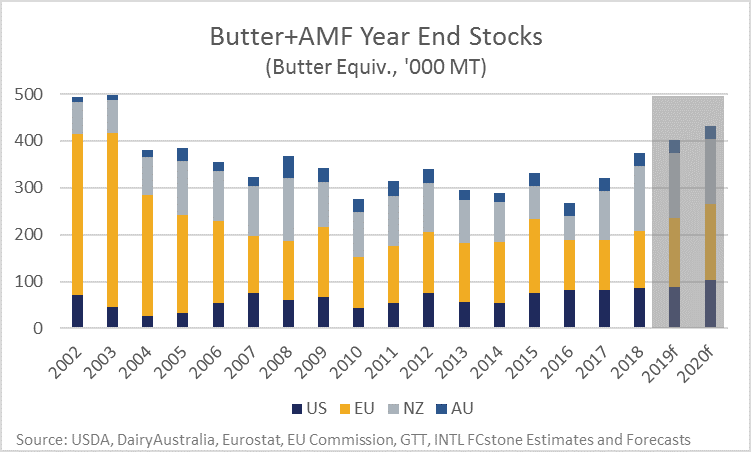 For more details and forecasts sign up for a free trial of our market intelligence service, go to:

Editor’s note: Nate Donnay is the Director of Dairy Market Insight at INTL FCStone Financial Inc. and has been applying his interest in large complicated systems and statistical analysis to the international and U.S. dairy markets since 2005. As a consultant, he has worked with clients at all levels of the dairy marketing chain from the farm level up to processors and packaged foods companies, food distributors and restaurants as well as connected industries like banks, private equity groups, government agencies, and industry associations. Through ongoing reports or one-off client specific projects, he helps them understand the short and long-term trends and the underlying relationships driving the market and what that means to their businesses.

Nate Donnay, Director of Dairy Market Insight for INTL FCStone Financial, provided an overview of global dairy markets in his article in the September 3 issue of DairyBusiness Digital. In this conversation with Joel Hastings [Read More …]

It’s a bold statement that flies in the face of many articles written by others over the past five years and I might catch some flak for it, but it’s what I believe and I [Read More …]