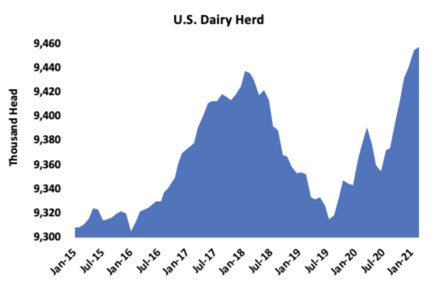 The United States dairy herd continues to expand, driving milk production upward. According to USDA’s Milk Production report, released Thursday, producers added another 3,000 head of cattle between January and February, pushing the national herd up to 9.458 million cows, the largest herd size in decades. The growing herd drove a 2% increase in milk production in February, after accounting for the leap day. Totaling 17.63 billion pounds, February milk production was the strongest ever recorded for that month after considering leap days. USDA also revised January milk production growth up to 2.4% from the 1.6% published in last month’s report. Milk production has been growing for nine consecutive months, following the sudden decline that occurred at the beginning of the pandemic. 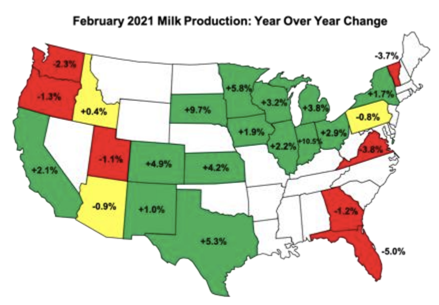 Milk production was particularly pronounced in the upper Midwest where relatively mild temperatures during most of the month helped to accelerate gains in milk yields. California milk production also grew by 2.1% during the month and USDA revised the state’s surprising January loss of 0.7% printed in last month’s report to a gain of 2%. Perhaps most shocking, however, was that despite the devastation brought about by winter storm Uri, Texas and New Mexico still managed to post year over year production increases of 5.3% and 1%, respectively, in February. It is likely that that the full effects of the storm will show up in future reports as culling in those geographies increased and dumped milk, while captured in the milk production figures, never made its way into finished products.

In any case, milk is undeniably long and with the spring flush imminent in most parts of the country, supplies are expected to remain plentiful. Yet even as milk remains abundant, demand has also perked up, helping to keep markets in balance. Bottlers in several areas of the country are reporting improved demand, even as educational institutions head into spring break. The foodservice sector has also begun to improve and retail demand for dairy products, has remained robust as spring holidays near. Dairy product manufacturers report that their schedules remain busy as they attempt to clear spot loads of milk and satisfy customer demands.

With the Easter holiday and other spring celebrations rapidly approaching, butter churns have been gearing up to meet demand. Butter manufacturers report that domestic demand has been healthy from both retail and foodservice outlets while international interest has remained robust. Cream supplies have tightened considerably in the Central and Eastern United States, but the arrival of the spring flush should ease tension on cream markets. CME spot butter prices were rather quiet for most of the week. On Friday, however, spot prices gave up 4.5¢ to ultimately close the week down a nickel at $1.665/lb., the lowest price since the trading of new crop butter began at the beginning of the month. 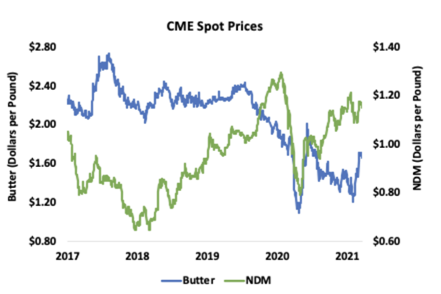 Even after rising by quarter cent on Monday, the nonfat dry milk (NDM) spot market also ceded some ground over the course of the week, giving up a total of 1.75¢ versus last Friday to end the week at $1.1525/lb. Despite the losses seen in Chicago, market participants surveyed by Dairy Market News report that the market feels poised to move higher. Export demand, particularly from Mexico has purportedly improved dramatically and parts of the country are reporting that spot loads of condensed skim are less available. Class IV milk futures were generally quiet though they gave up some ground later in the week as the spot butter and NDM markets saw prices retreat. 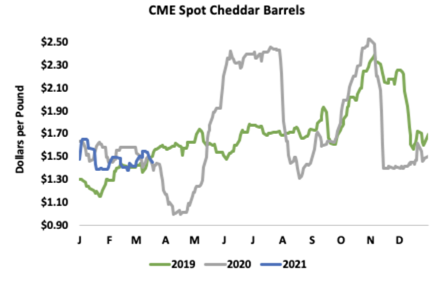 In many parts of the country, improved foodservice activity has translated to increased demand for cheese. While most manufacturers report that activity remains understated relative to pre pandemic levels, demand has markedly improved compared to several weeks ago. The CME block market rose by a penny on Monday and fell by a penny on Friday, ending the week unchanged from last Friday at $1.79/lb. Barrels, however, gave up a dime over the course of the week, falling to $1.4525/lb. on Friday with a total of 13 loads trading hands. The block-barrel spread has now grown to 33.75¢, the largest gap since last November. 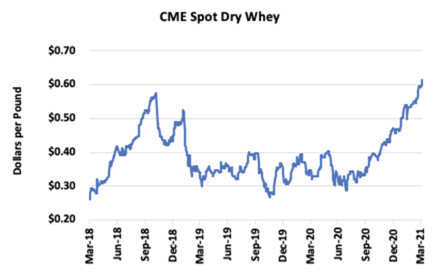 Meanwhile the spot whey market continued to reach new heights, setting another record this week and gaining ground every day but Friday when it remained unchanged. Closing Friday’s trading session at 61.25¢/lb. dry whey prices were up 2¢ compared to last Friday and have once again hit levels not seen since the market was created in 2018. Strong demand from both domestic and international sources for a variety of products across the whey complex continues to drive the prices higher. Despite they whey market’s sustained rally, weakness in the cheese market weighed on the Class III milk futures markets during most of the week. Nearby contracts gave up value on nearly every day, with APR21, MAY21, and JUN21 each falling by at least 30¢ over the course of the week.

After being unimpressed by last week’s USDA WASDE report, the grain markets were fickle this week. Grain futures rose and fell on announcements of export commitments and shifts in other markets such as the crude market. Corn futures moved up on Tuesday and Wednesday, fell on Thursday then gained some ground on Friday as additional sales to China were announced. Soybean futures retreated on Wednesday and Thursday before finding their footing on Friday. Nevertheless, grain prices remain elevated while the market anxiously anticipates the release of USDA’s Prospective Plantings report, scheduled for publication on March 31.

Results will be published in the Milk Production report on October 21 Thousands of milk producers across the country, including over 4,000 in the Northeast, will receive surveys from the U.S. Department of Agriculture’s National [Read More …]

In an interesting turn of events, some federal agencies are being brought back to work. U.S. Secretary of Agriculture Sonny Perdue announced that many Farm Service Agency offices will reopen temporarily in the coming days [Read More …]