Feed represents the single largest expense on most dairy farms, and even small improvements can have important financial, environmental, and land use implications.  We have made tremendous and well-documented gains in the efficiency of milk production over the past half-century through advances in animal breeding, plant breeding, ruminant nutrition, agricultural engineering, and veterinary medicine.  Genetic improvements in efficiency have come through increases in milk yield and milk components – these were accompanied by large increases in feed consumption, in order to meet the greater energy demands of lactation.  Increasing the proportion of dry matter intake (DMI) used for lactation, relative to DMI used for maintaining bodily functions in a non-lactating state, leads to a phenomenon known as dilution of maintenance.

This phenomenon is measured in multiples of maintenance, and today’s high-producing cows often require 5X or 6X as much energy for lactation as they need for maintenance.  However, gains in efficiency through increased multiples of maintenance have diminishing returns when we push milk production to higher and higher levels (for example, the gain in efficiency when going from 2X to 3X maintenance is greater than the gain from 5X to 6X maintenance).  These diminishing returns are further exacerbated by an increased rate of passage at high levels of DMI; simply put, digestion of feedstuffs and absorption of nutrients tend to be incomplete if feed moves through the cow too quickly.  For these reasons, researchers have been working diligently to identify differences in the biological efficiency of individual cows in converting consumed feed into milk and body tissue.  In the terminology of a nutritionist, we are moving from considering the energy density of a given diet, to considering the energy density of a given diet for a particular cow or sire family.  In order to measure biological efficiency, we need to measure daily DMI on large numbers of individual cows.

The swine and poultry industries have been selecting animals for improved feed conversion efficiency for many years and, in most cases, selection has focused on increasing the ratio of body weight gained to feed consumed.  Meanwhile, their counterparts in the beef industry have tended to focus on residual feed intake (RFI), which is the difference between actual and expected DMI consumed by an individual animal on a given day.  Selection criteria are fairly simple in a feedlot setting, because one can focus exclusively on one energy sink, or bodily function for which consumed DMI is used; in this case it is the accumulation of body tissue, which is typically measured as average daily gain.  The situation is much more complicated in dairy cattle, because cows must produce large volumes of milk, accumulate or mobilize body tissue at various stages of the lactation, and maintain important bodily functions associated with remaining healthy, becoming pregnant, and producing a live calf.  For this reason, we typically focus on three energy sinks when computing expected DMI and comparing the relative efficiency of dairy cows: energy required for lactation, energy required for maintenance, and energy required for body weight change (growth or added body condition), as shown in the figure below. 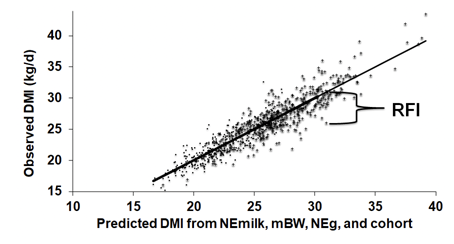 Excellent studies on the genetics of feed efficiency in dairy cattle were published more than 25 years ago, primarily based on work in Europe, but prior to advent of genomic selection it was simply impossible to measure daily DMI on tens of thousands of daughters of new dairy bulls graduating from progeny testing programs each year.  The challenge remains daunting in the genomic era, but with significant investments of time, money, labor, and technology we can now measure DMI and RFI in a genomic reference population comprised of cows on university research farms, and the resulting information can be used to compute predicted transmitting abilities (PTAs) for feed efficiency of other cows, bulls, heifers, and calves in the national population.

Research on genomics and feed efficiency in U.S. dairy cattle was jump-started by a USDA-NIFA Agriculture and Food Research Initiative grant led by our Michigan State colleague, Mike VandeHaar, nearly a decade ago.  Subsequent investments by the Council on Dairy Cattle Breeding (CDCB) and the Foundation for Food and Agriculture Research have allowed growth of our genomic reference population to more than 6,200 cows at present, with 50 to 75 new cows added each month from research herds in Wisconsin, Michigan, Maryland, Iowa, and Florida.  These cows have genomic test results, as well as daily records for milk yield, milk composition, body weight, body condition score (BCS), and DMI for approximately 42 days in mid lactation.  We chose the time period between 50 and 200 days postpartum, because that’s when cows are in peak lactation, and when their body weights and BCS are relatively stable.  We can compute the RFI of each cow from these data, by comparing her actual DMI with the expected DMI of a cow of equivalent body weight, milk yield, milk composition, and gain or loss in body weight over the study period.  All calculations are done within a cohort, where a cohort is defined as all cows housed at a particular research station at given time who are eating the same diet – this is the same concept as the contemporary groups or herdmate deviations we’ve used in routine genetic evaluations of other key traits for decades.

A second important outcome of this research is more precise information about the maintenance energy requirements of modern dairy cows.  Previous estimates of the daily maintenance requirements of dairy cows, such as those published in the 7th (2001) edition of the National Research Council (NRC) Nutrient Requirements of Dairy Cattle, were based on many small studies carried out in the 1980s and 1990s.  Data from our current studies indicate that the maintenance requirements of today’s lactating dairy cows are nearly 50% greater than those suggested by the NRC in 2001, and the added maintenance cost penalty assigned to excessively large cows in the 2021 version of Lifetime Net Merit (NM$) will be roughly double the value used presently.  This penalty includes extra feed expenses incurred by large animals during the rearing and dry periods, as well as added housing costs, but large cows receive credit for greater salvage and calf values.  For U.S. dairy cattle, the maintenance requirements and associated rearing costs and salvage values are based on the body weight composite (BWC), which is comprised of five linear type traits: stature, strength, body depth, dairy farm, and rump width.

For publication purposes, CDCB will combine PTA values for RFI and BWC into a new trait called Feed Saved.  We followed the pioneering research of Jennie Pryce and her colleagues in Australia, and we expect Feed Saved to assist farmers in breeding cows of moderate size that can convert consumed feed into milk and body tissue very efficiently.  Said another way, it will help farmers avoid breeding cows that waste feed in achieving and maintaining excessive body size or waste too much consumed energy as feces, gas, urine, and heat.  Mathematically, the formula for Feed Saved puts weights of -138 on PTAs for BWC and -1 on PTAs for RFI; because both weights are negative, larger values of Feed Saved are desirable.

The standard deviation of PTA values for Feed Saved is about 109 pounds per lactation, so significant genetic variation exists between animals, and Feed Saved PTAs of the top 100 NM$ bulls range from -183 to +395 pounds per lactation.  The genetic correlations of Feed Saved with milk production is near zero, due to the way RFI is computed, and correlations with health and fertility traits range from zero to slightly antagonistic – these traits will be monitored closely, to ensure that gains in feed efficiency are not accompanied by losses in health, fertility, or longevity.  Reliabilities (REL) of Feed Saved will be a challenge, due to small size of the genomic reference population for RFI, and we expect average REL of Feed Saved for young, genome-tested calves to be about 37%.  On the other hand, the economic value of Feed Saved is quite large, and the relative economic weight proposed for this new trait in the 2021 version of NM$ is 24.6% (this can be broken down as -10.9% for BWC and -14.1% for RFI).  Our expectation is that selection for Feed Saved with provide an extra $8 million per year in net profit to U.S. dairy farmers, and these gains will accumulate over time.

Introduction of routine CDCB genomic evaluations for Feed Saved is a big step forward, and the result of nearly a decade of university research.  Our work is not finished, though.  Beyond adding roughly 750 new cows to the genomic reference population each year, we are collaborating with international partners who can contribute cows to a larger global reference population, developing proxies to predict DMI from inline milk analysis systems, wearable sensors, and computer vision algorithms, and carrying out intensive nutrition and physiology studies that will advance our understanding of key energy sinks and their relationships with dairy cow health, fertility, and feed efficiency.

Up to 60% of mastitis cases may not require antibiotic treatment “When we culture mastitis, cases come in three flavors, so to speak: Gram-positive, Gram-negative and no-growth,” stated Stephen Foulke, DVM, DABVP, Boehringer Ingelheim. He says [Read More …]

On hot days, the cows at Rosy-Lane Holsteins are given cool showers while they’re being milked. And the farm’s newborn calves are housed in pairs to enhance their social and cognitive development. Jennifer Van Os [Read More …]

Hindsight Is 20/20 with Heifer Raising

Imagine how much better off you would be if you could know, with certainty, the outcomes of every decision before [Read More ...]