A look at feeding management in Pennsylvania robot herds.

A properly balanced ration and good feed management are important to achieving production goals and maintaining cow health on dairy farms. On robotic milking dairy farms nutrition and feed management take on another important role, motivating cows to the robot. In robotic milking systems, cows receive a partial mixed ration (PMR) at the feed bunk and additional feed from the robot during milking.

If a cow meets all of her nutritional needs from the PMR there is no incentive for her to go to the robot. In addition to balancing the nutritional needs of the cow, the robot feed must be palatable and of consistent quality. The robot feed must also be something that the cow can consume quickly (2 or 3 times per day for about 7 minutes per feeding), and it must be affordable.

It has been reported that feed costs on dairy farms using robotic milking systems is higher than in parlor or tie-stall systems. The cost of feed dispensed by the robot is often given as the reason for higher cost in robotic systems. Most herds feed a single pelleted feed through the robot. However, some feed a ground meal or multiple feeds (for example, all cows receive a pelleted feed and high producing cows receive roasted soybeans in addition to the pellet). The amount of feed dispensed is based on days in milk or milk production of the cow, allowing the manager or nutritionist to tailor the ration to each cow’s individual needs.

Figure 1 shows feed costs per cow per day versus milk production on these 8 farms (yellow triangles) compared to 46 Pennsylvania dairy farms milking in a parlor or tie-stall facility (blue circles). Data from the 46 non-robotic milking farms came from farms participating in the Penn State Extension Cash Flow Planning program in spring of 2017. To standardize the cost of home-raised feed costs across farms, all home-raised feeds were assigned a market price value calculated monthly by Penn State. 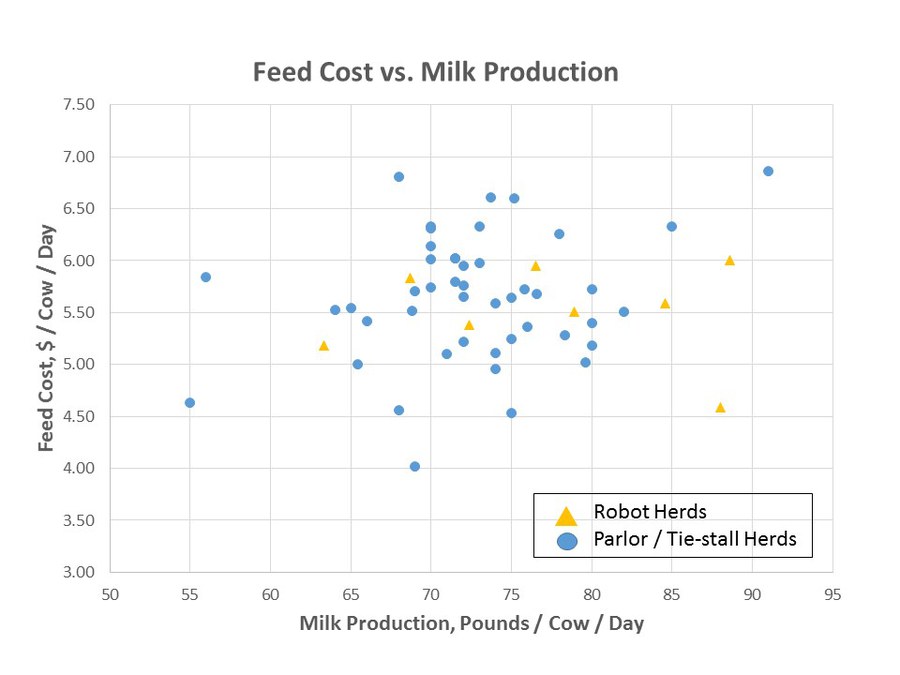 An evening with Keystone dairy royalty

Applications due for On-Farm Internship Program

Undergraduate students who are interested in gaining hands-on experience in dairy production are encouraged to apply for the 2021 On-Farm Internship program. Applications are due by October 31, 2020 and can be submitted online. The [Read More …]

College students from across Pennsylvania were awarded student leader scholarships Ten undergraduate students were recently honored with Student Leader Scholarships, intended to encourage and empower the next generation of dairy producers. Supported by the Center [Read More …]