The first-generation bovine reference genome map defined genomics 1.0.  This initial map was made available in 2004 and was a key accomplishment of a six-year international collaboration of ~300 scientists in 25 countries coupled with research investments totaling $53m.  The genomics 2.0 map is the first ground up revision of the bovine genomic map in nearly 14 years.  This second-generation map also results from a multi-country collaboration including scientists from several U.S. Department of Agriculture (USDA) laboratories, the U.S. National Institute of Health (NIH), the Universities of California-Davis and Missouri, and commercial companies on two continents. 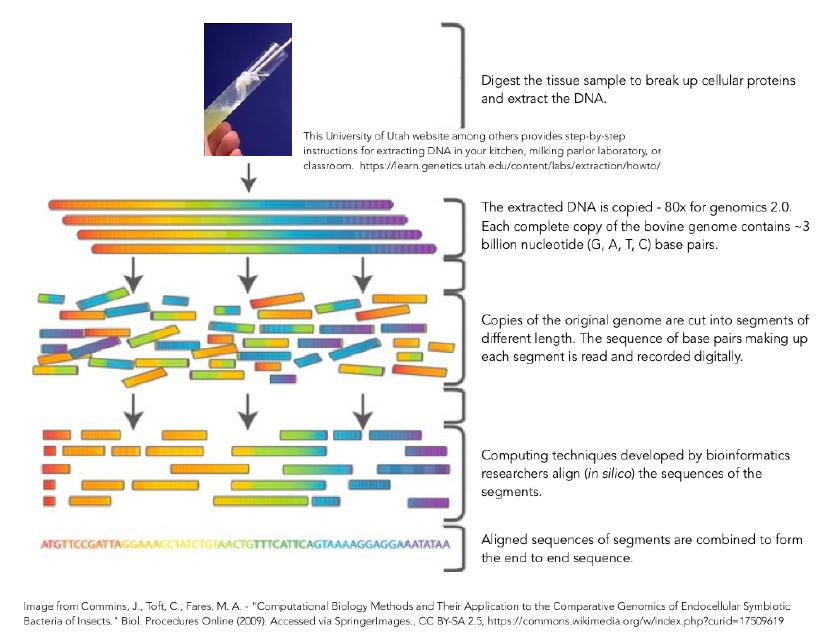 Improvements Made Possible by the Genomics 2.0 Reference Map

By using the new genomics 2.0 reference map, USDA and CDCB scientists have expanded the number of SNP used  in routine genomic evaluations and other CDCB services from ~60,000 to approximately 80,000.  In addition, the SNP derived from the genomics 2.0 map are expected to provide more reliable results across time.  Using the new map, USDA and CDCB scientists also have refined testing for haplotypes/genes affecting fertility.

What changes from using the new map can we expect for genomic results and related services?  Going forward, for individual bulls, cows, and heifers we can expect more accurate and stable CDCB genomic

evaluations, female and bull genotyping results, genomic parentage discovery, haplotype/gene testing, breed trait STAs, and index values such as NM$, JPI™, and TPI®.  For December 2018, some differences in results from August 2018 can be observed.

For the dairy industry, the improvements resulting from genomics 2.0 are analogous to the changes we all experience when using a new computer with much improved electronics and chips.  Initially some of the changes may seem difficult to manage, however over time the benefits of the improvements become more evident and continue to deliver value.

We all owe a big “Thank you,” for the public U.S. research funding and expert collaboration that have delivered this innovation in genomic for the dairy and beef industries!

Editor’s note: Dr. Marj Faust is a founder and principal of Agri Innova LLC and Data Driven Genetics, where she and her team partner with established and emerging organizations as well as farming businesses globally to build strategy and deliver innovation. She was an R&D executive at ABS Global and Genus plc, served on the faculty at Iowa State University, provided consulting services in regulatory sciences to Novartis/Syngenta Seeds and FASS, and has held leadership posts in several dairy organizations. Readers may contact her with questions or suggestions at [email protected].

When thinking about manure management technologies and options, digesters are often the first to come to mind. But methane digesters are only part of the solution. The recovery of phosphorus, nitrogen, potassium and fiber from [Read More …]

The four millionth genotype was recorded on March 2 in the CDCB database – an incredible feat possible through collaboration between the U.S. and Canada and among dairy producers, genotyping labs, nominating organizations, international partners, [Read More …]