The equivalent of one day of total U.S. milk production per month now goes to Southeast Asia.

U.S. dairy exports to China have been hit hard by several rounds of retaliatory tariffs. Fortunately, the checkoff-funded U.S. Dairy Export Council has been working tirelessly in other markets around the world.

Those efforts led to a record-setting 2018, with one of the most powerful drivers Southeast Asia, where export sales increased 12% from the previous year.

What does this mean for U.S. dairy farmers?

The equivalent of one day of total U.S. milk production per month now goes to Southeast Asia.

A new infographic showcases this success story with data and pictures for the U.S. dairy industry to save, download, print, amplify and share both online and offline. 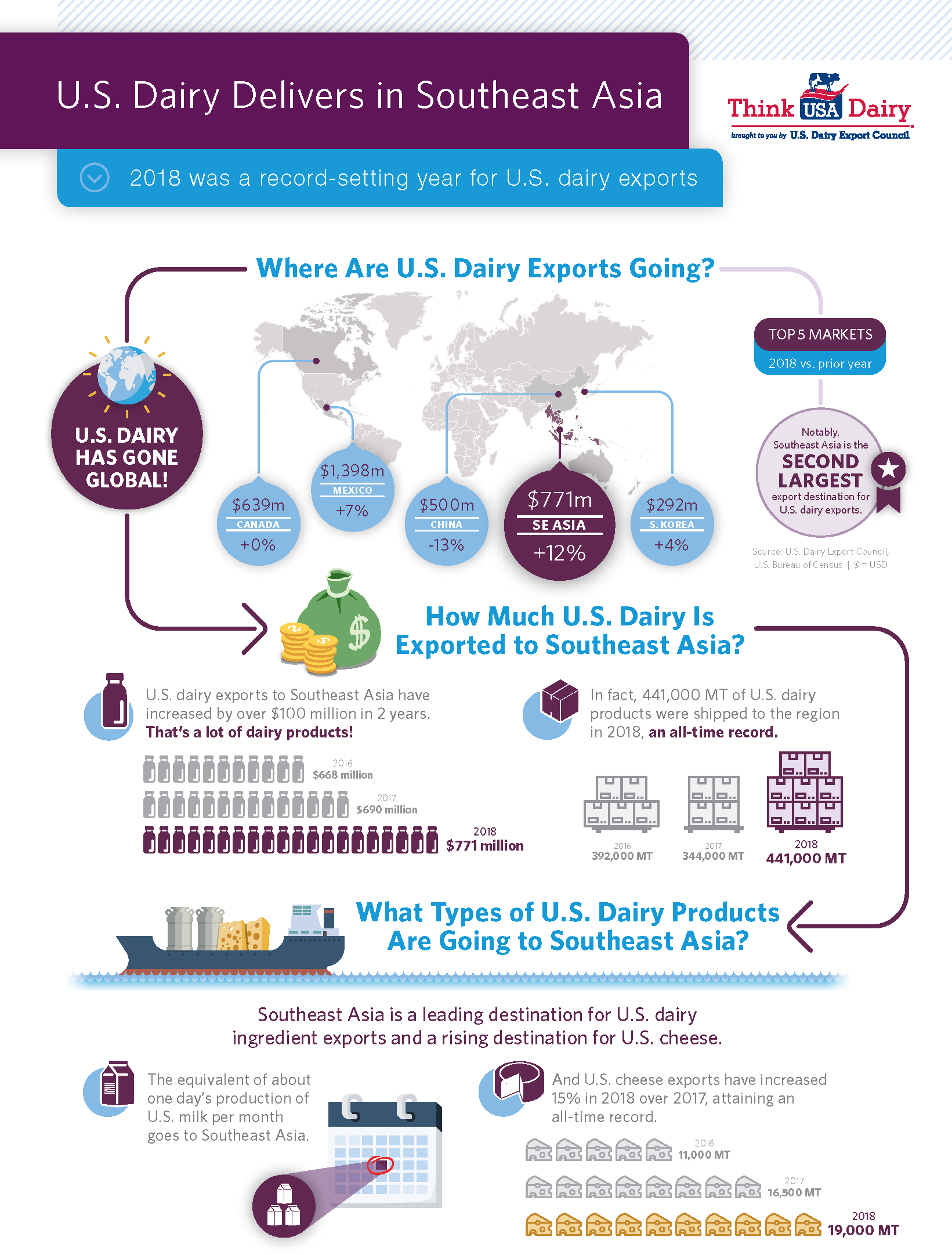 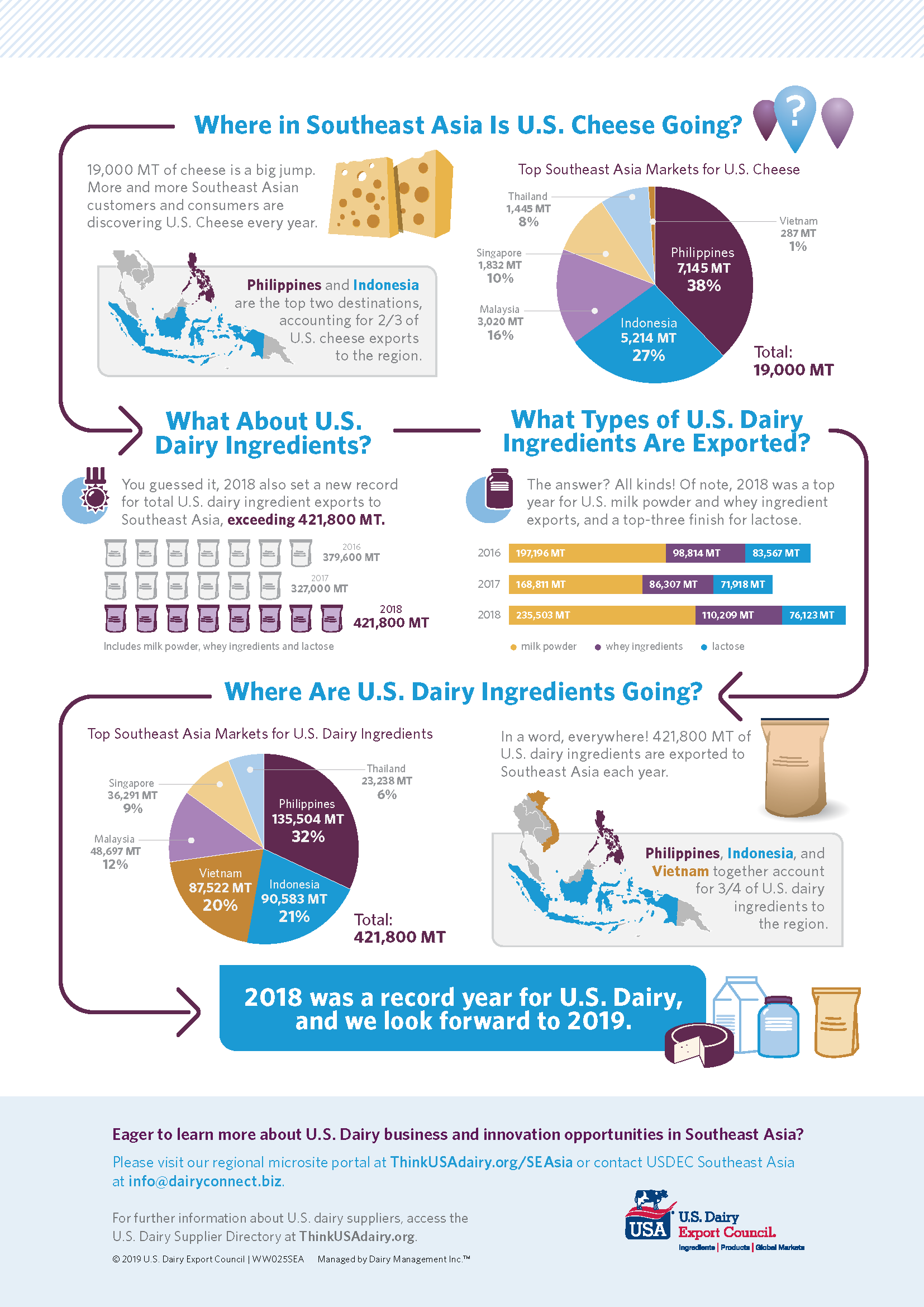 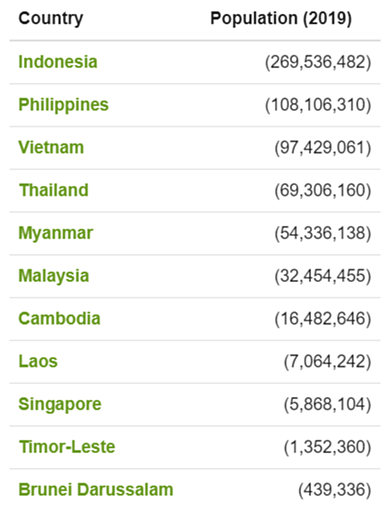 Looking ahead to 2050, the countries geographically south of China, east of India, west of New Guinea and north of Australia will continue to grow, with 142 million more mouths to feed, according to one projection.

For example, last year USDEC signed a partnership agreement with the influential Food Innovation and Resource Center (FIRC) at Singapore Polytechnic. It was renewed this year.

For the second year in a row, USDEC was the official dairy partner of The World Gourmet Summit (WGS), which took place in Singapore April 1 to May 12. USDEC held a series of activities that elevated the visibility of U.S. cheese and educated attendees about U.S. craftsmanship, variety, versatility and innovation potential.

The efforts of USDEC and its members companies are paying off.

China, the world’s most populous  country, with 1.4 billion mouths to feed, remains a vital part of USDEC’s long-term strategic plan. But as Southeast Asia demonstrates, diversification brings strength and resilience.

“Resolving the China trade dispute may take awhile,” said USDEC President and CEO Tom Vilsack. “By taking a diverse geographic and product approach to marketing and promotion, we hope to provide opportunities for our member companies to pivot to alternate markets in a rapid and seamless manner.”

“U.S. suppliers are already doing yeoman’s work finding alternate new homes for U.S. dairy products, and USDEC has been actively supporting those efforts in Southeast Asia and around the world.”

Trudeau to meet Trump in Washington next week for talks on trade, China Prime Minister Justin Trudeau and U.S. President Donald Trump are to discuss continental trade and their shared challenges with China in a [Read More …]

Today, the National Farmers Union issued a statement regarding China’s tariffs on US

Roger Johnson, President of the National Farmers Union: “It’s no surprise that China is slapping even more tariffs on American products. Every time Trump escalates his trade war, China calls his bluff — and why [Read More …]